Orchids Blossom in the Middle of the Pandemic: Physiological and Morphological Responses of Dendrobium Orchids to Liquid Bioslurry 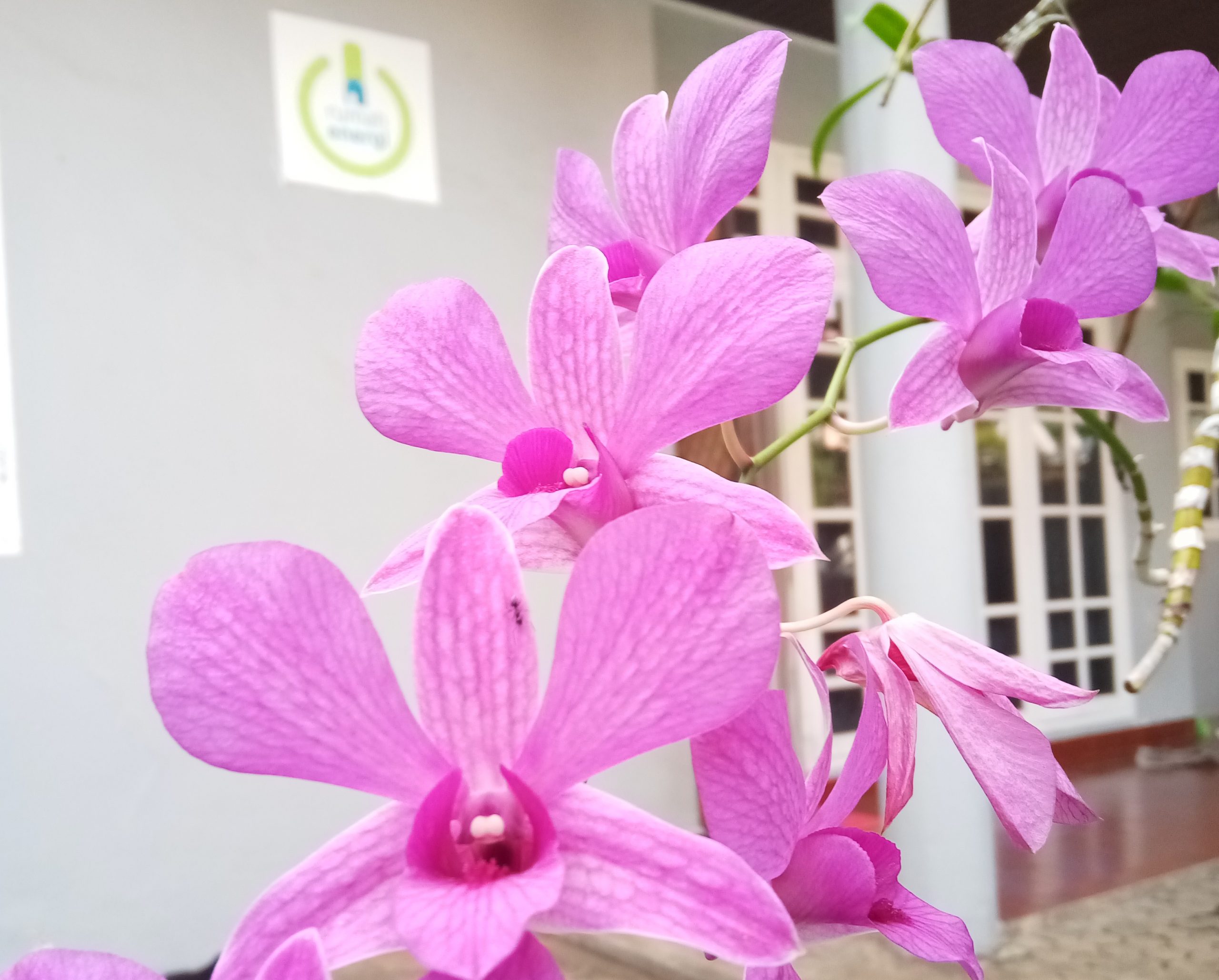 Orchid, a family of plants classified as Orchidaceae, is well known as one of the flowers that many people like because it is easy to care for and does not require extra attention to the flower. Among the more than 43,000 species, Indonesia has been identified as contributing more than 5,000 species spread across the archipelago.1 One of the most popular species in Indonesia is the genus Dendrobium which lives epiphytes or attaches to other plants or even attaches to mossy cliffs and rocks.
Bio-slurry or better known in Indonesia as biogas pulp is quite well known by rice farmers, horticulture, and hydroponic farmers for its effectiveness as a natural fertilizer in stimulating plant growth. In foliage plants such as kale, Pak Choy, and tobacco, bio-slurry can help accelerate growth and also the formation of wider and greener leaves. In cereal crops such as corn and rice, bio-slurry can stimulate the formation of fruit (corn cobs and grains of rice) more and a faster ripening period.

Hasanuddin’s findings with Rumah Energi on corn plant plots showed that solid and liquid bio-slurry had slightly different functions in plants. Liquid bio-slurry shows the ability to stimulate the formation of more fruit. The same thing applies to orchids. During the Covid-19 pandemic, an experiment with NO measurable variables was carried out on orchids to see the plant’s response to liquid bio-slurry. Within one month, spraying liquid bio-slurry was done on the orchid that had been diluted with a concentration of 800 ppm. Spraying is done every morning around 8:00 to 10:00 WITA on the roots and leaves of orchids. Instead of bio-slurry only stimulating the growth of leaves and flowers, it turns out that orchids also give different responses to their roots and shoots.
In epiphytic orchids, roots have a dual role as an organ to absorb water and nutrients and as an organ to attach to plants or other media.2 Before spraying using bio-slurry, the physical form of the root shown is almost entirely white to the tip roots because it is covered in velamen which prevents evaporation. Post fertilization, significant changes begin to be demonstrated by the roots of the breath that hang freely, from the original velamen completely covered to grow and greenish because it is not covered by velamen again. The length of the root which is not covered by the velamen varies between 5mm to 15mm. This shows that orchid roots adapt to bio-slurry that is sprayed by adding roots that are not covered by velamen to absorb nutrients from more bio-slurry. 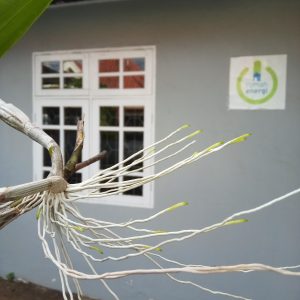 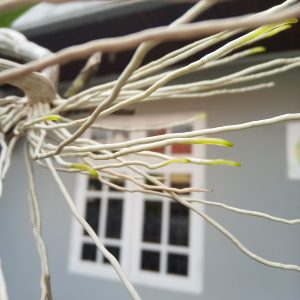 Figure 1. Roots of the breath of orchids that grow and are not covered in velamen (greenish colour).

Subsequent responses were also shown by orchid buds. The shoot is actually one of the ways of regeneration carried out by the orchid vegetatively, that is without going through pollination between the pistil and pollen. In order for an orchid to germinate, it must be stimulated by growth hormones called cytokinins and auxin3,4, both internally and externally. After spraying, new shoots appear in several places that are not expected to grow shoots. The place is like a stem that looks dead and has no leaves or even between the roots attached to the stem of the parent plant. Even the emergence of new shoots is not expected at all. Referring to the previous sentence about orchid budding, this indicates the cytokinin and auxin content in bio-slurry and confirms the existence of growth hormone reported by the BIRU Program.5 But unfortunately, there is no further research on the concentration of growth hormone in bio-slurry. 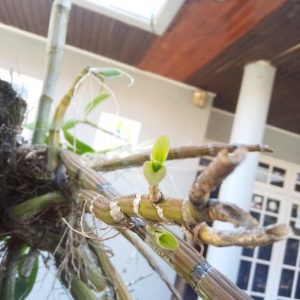 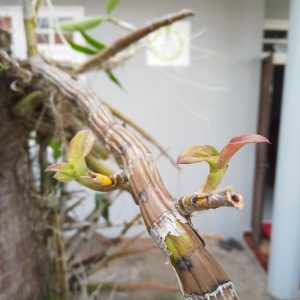 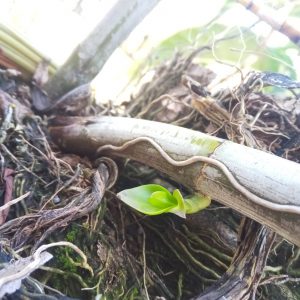 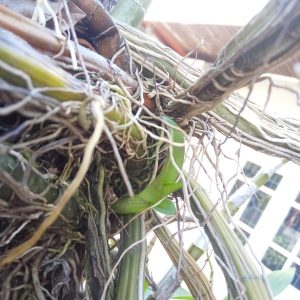 Figure 2. Growth of shoots in orchids in response to bio-slurry spraying.

If the budding is vegetative growth, flowering is part of generative growth which involves pollinating the pistil by pollen. Flowering is also influenced by the same hormones. In orchids used as experimental material, usually in one flowering period, there are only one or two flower stems. However, after the spraying is done, there are at least three flower stems that are still in bloom and there are three other stems that will be candidates for flowering stems. Besides, it also seems that the flowering period is longer than before. This response suggests that naturally (without continued fermentation) bio-slurry has the right composition to stimulate the productivity of growth and regeneration of flowering plants. 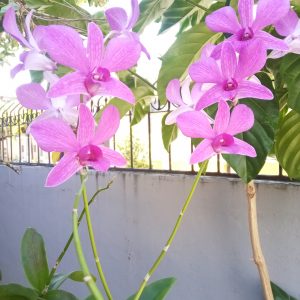 Figure 3. Stems of prospective flowers that begin to grow.

A rather surprising response was given by the leaves because he seemed not to give any response. There is no formation of leaves that become wider or greener as occurs in vegetable plants. Leaf growth does occur, but it is still within the limits of normal growth.

The Role of Bio-Slurry in Orchid Agribusiness

Bio-slurry or what is referred to as biogas dregs is already in the IEA Bioenergy Task 37 as organic fertilizer and organic soil enhancer. It has become part of the standards for sustainable agriculture and climate-smart. However, dosage, follow-up processes, and effective use still need to be formulated through measurable scientific research.

This experiment is indeed just an experiment without measurable variables, so the conclusions obtained are still far from scientific words. But at the very least, this simple experiment can open the door to further scientific research. There are still many bio-slurry potentials that can be explored for other plants, both food plants, ornamental plants, and other plants. The lack of literature that reviews bio-slurry and its benefits to plants opens up wider research opportunities.