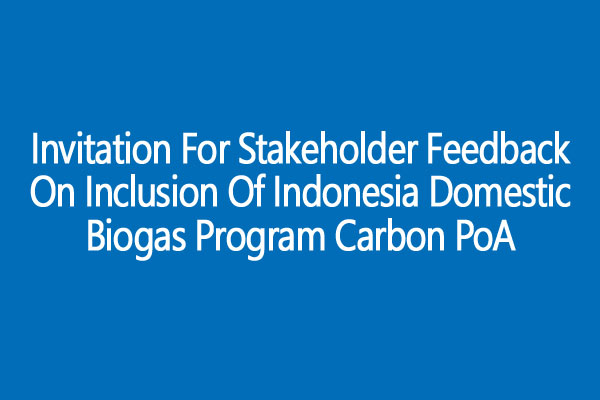 Hivos would like to take this opportunity to invite you to participate in the Stakeholder Feedback Round of the Indonesia Domestic Biogas Programme.

Since May 2009 Hivos, in cooperation with the Directorate General New Renewable Energy and Energy Conservation (DGNREEC) of the Ministry of Energy and Mineral Resources (MEMR) of the Republic of Indonesia, has implemented Indonesia Domestic Biogas Programme (also known as BIRU Programme). IDBP contributes to the improvement of access towards new renewable energy, quality of family’s health and saving the government’s subsidy on kerosene. IDBP aims to build 25,000 unit bio-digesters in minimum 16 provinces across Indonesia until the end of 2018. As per 3 October 2016, 18,476 units of bio-digesters have been constructed.

As part of the carbon certification process overseen by the Gold Standard Foundation, relevant stakeholders are presented with the opportunity to provide feedback on the general design of the carbon programme through several rounds of stakeholder consultations. The first round is the Local Stakeholder Consultation, a physical meeting which was organized by Hivos in Jakarta on 16 February 2012. The second round is an electronic Stakeholder Feedback Round which was conducted from 5 April to 5 June 2012. Following the stakeholder feedback consultation, the Indonesia Domestic Biogas Programme was registered with the voluntary Gold Standard as a Programme of Activities (PoA), while key features of the design and impact of the programme remained identical to what was presented during the aforementioned Local Stakeholder Consultation meeting.

The Indonesia biogas PoA has been officially registered under the Gold Standard Energy program (IDBP PoA GS1172, VPA1 GS1174) on 31 May 2013. The emission reductions from 1 June 2011 until 31 December 2014 have been verified and 87,109 GS VERs have been issued in two rounds (July 2014 and September 2015). The emission reductions realised by the biodigesters during 2015 are under verification. We expect a third issuance of GS VERs shortly.

Hivos has been advocating for the development of a methodology to account also for carbon reductions and soil carbon sequestration which will occur due to an increased use of bio slurry as a fertilizer by farmers participating in the biogas programme. This has been discussed in a second Local Stakeholder Consultation meeting, conducted on 20 March 2015 in Arion-Swiss Bel Hotel, Jakarta. The methodology is under approval by the Gold Standard and we hope that the IDBP bioslurry emission reductions and soil carbon sequestration can be verified in the near future.

We are now preparing a second Voluntary Project Activity to be included under the Indonesia biogas PoA (Gold Standard Energy programme). The reason to prepare a new project activity is because VPA1 was designed as a so-called Small Scale Project Activity and can cover up to approximately 18,000 biogasdigesters. Therefore a new VPA is designed for biogasdigesters to be installed in Indonesia from 2017 onwards. This will be Indonesia Domestic Biogas Programme (IDBP)(ID1172), VPA2 (ID5303).

The overall objective of VPA2 is to contribute to the achievement of the Sustainable Development Goals (SDGs) through the dissemination of domestic biogas systems as a local, sustainable energy source and the development of a market-oriented biogas sector in Indonesia. VPA2 will stimulate the installation of domestic biogas systems with a capacity from 4 m3 to 12 m3, which is the same as under VPA1. Also otherwise, the design of VPA2 will be the same as the design of VPA1.

The only difference between VPA1 and VPA2 will be the start and end dates. VPA2 will cover domestic biogas systems installed in 2017 and following years, up to a maximum of 7 years after the start date.

We will appreciate your feedback by email sent to Chabi Batur Romzini – c.romzini@rumahenergi.org

This consultation round is open for a period of two months, meaning that we will await your feedback until 5 December 2016