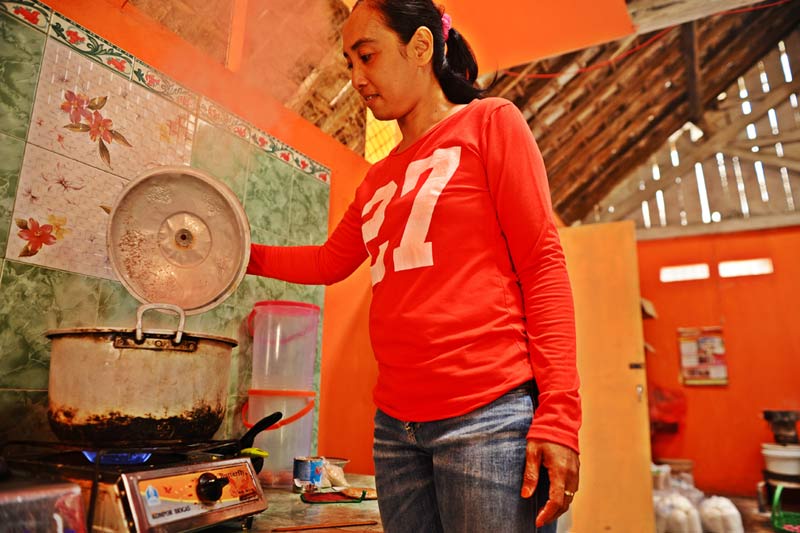 Excerpted from the publication of the Ministry of Energy and Mineral Resources in 2016, Indonesia is an archipelagic country blessed with abundant natural resources which may be utilised as the source of energy for the people’s sustainability.  The nature’s potentials can be further developed into new and renewable energy to fulfill the needs of national energy throughout Indonesia.  Technically, the potential of new and renewable energy development in Indonesia may consecutively be generated through wind energy (950 Megawatt), Solar Power (11 Gigawatt), and Hydro Power (75 Gigawatt), Biomass Energy (32 Megawatt), Biofuel (32 Megawatt), Marine Energy (60 Gigawatt), and Geothermal (29 Gigawatt) (Ministry of Energy and Mineral Resources, 2016).  The development of new and renewable energy resources are crucial and have been the latest issues encountered by Indonesia today.  The real issue is, the supply of the fossil energy we have been exploited throughout these times is steadily diminishing thus the possibility of national energy crisis becomes inevitable.

National energy crisis will be further worsened as Indonesia relies heavily on oil as the primary source of energy while the issues of government subsidy toward oil (Hartono and Resosudarmo, 2008).  The statement matches and is supported by the records of the Ministry of Energy and Mineral Resources in 2016 which stated that the mix of the utilisation of energy resources as of 2015 were still predominantly fossil energy.  In terms of the national perspective; the energy resources originating from the crude oil remain the primary source of Indonesian in which they claim 47 percent shares, followed by coals, and natural gas at 24 percents respectively, while the remaining 5 percent will be originating from the utilisation of new and renewable energy.  Various impacts arising from this energy crisis lead to the risks at various levels, both macro/government level and down to community level.  Energy crisis may potentially unsettle the stability of National Budget status, while in other hand the crisis may potentially widen the social gaps within the community in conjunction with access toward the sources of energy.

Rural community (especially women’s groups) with its limited social, economic, and geographical conditions is one of the vulnerable groups due to its minimum skill levels in accessing the source of energy.  With respect to such matters, GACC stated in 2011 that approximately 82% of the rural community still rely on collecting firewoods as the primary fuel source for cooking purposes and almost 100 millions people rely on traditional stoves.  Furthermore, in 2015, the Institute for Essential Service Reform (IESR) has also exposed that lack to accessibility to energy resources have very much affected communities living in remote areas, as they assume the primary responsibilities of domestic chores such as cooking, cleaning the house, boiling the waters, and raising the children.  Beyond the vulnerable conditions due to the disparity in duties and domestic roles they have to sustain, women in this context is perceived as the right agent to improve the conditions of family wellfare through the provisions of renewable energy and various efforts their empowerment.

In conjunction with the conditions, the initiative of Sustainable Energy for All (SE4ALL) has been carried out by a number of civil community organisations (NGO/CSO) through the formulation of numerous strategies which may encourage the incorporation of civil community group agendas in SE4ALL implementation plan, including gender perspective and women economic empowerment through energy access (IESR, 2015).  As one of the NGOs engaging in promoting the new and renewable energy sector in Indonesia, Rumah Energi is one of SE4ALL vital implementing actors trying to improve energy accessibility for women through Domestic Biogas (BIRU) Programme or IDBP.  The purpose of programme implementation is aimed to improve the conditions of family living in ten provinces throughout Indonesia through various benefits generated by the construction of BIRU reactor.  The inclusion of gender issues in the development of new and renewable energy may improve the women’s position through social economic empowerment, by reducing their household responsibilities, encouraging equality in gender roles within the family, as well as promoting the family welfare and community welfare in general.

Additionally, the development and management of new and renewable energy sector which include gender issues may be a reflection on participatory development practices within a community.  This type of development may be implemented by involving active community participation as the subject and object of the development itself.  In this development, aspirations and ideas of the communities become a number of key components.  Through BIRU Programme, Rumah Energi attempts to encourage the creation of better conditions for community life, especially by giving a special attention on the women’s conditions in the management of biogas technology as one of the concrete form of new and renewable energy.  Moreover, Gender Action Learning System (GALS) is one of a series of activities performed by Rumah Energi as its form of commitment in including gender issues with respect to the management of alternative source of energy.  GALS attempts to attract women’s participation in utilising BIRU reactor to enhance family resilience against energy supply and improve their social economic conditions.

In addition to minimising the burden of family expenditures with respect to acquiring oil fuels and firewood collection, the significant utilisation of biogas will lead to the improvement of daily life conditions of the women and their families.  Additional values provided by BIRU reactor include bio-slurry which may serve as high quality organic fertilisers and to restore soil fertility, improve crop productivity, and as additional source of revenues.  Eventually, the iniative of gender participation which consistently takes place within the community will also help in attaining the objectives of SE4ALL (providing access to the source of energy without exemption) and SDGS (inclusiveness and gender equality in new and renewable energy management).  (Supriadi)

IESR. (2015).  Indonesian NGO/CSO Meeting to Promote the Implemantation of Sustainable Energy for All (SE4ALL). Workshop report on August 9, 2015 at Bumbu Desa, Cikini, Jakarta.

The Ministry of Energy and Mineral Resources.  (2016).  Mainstreaming New and Renewable Energy as Future Source of Energy.  Jurnal Energi, Edition No. 02, page 9-11.