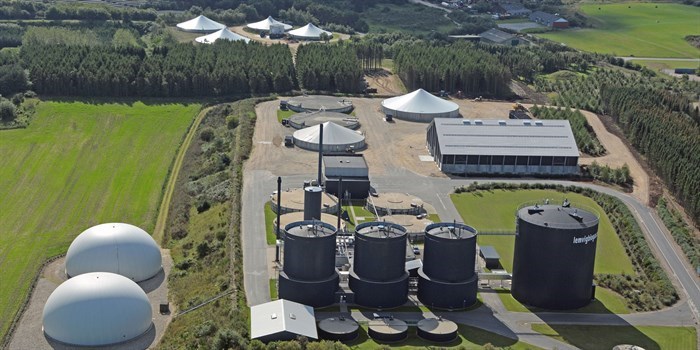 In such European countries as the Great Britain, Germany, Sweden, and Finland biogas and biomass utilisation as the primary source of energy are nothing new.  As quoted from the ec.europa.eu page, biogas and biomass contribution are as much as 65% of the renewable source of energy category in 2014.  The utilisation of the biogas is beyond the domestic cooking purposes the way it is today in Indonesia, but also for room heating purposes, vehicle fuels, power generator, and even distributed through natural gas pipeline. 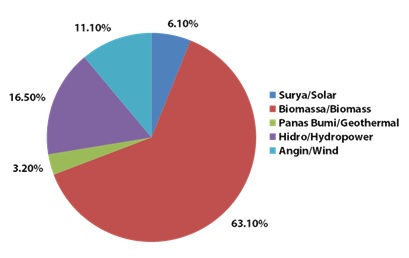 Composition of renewable energy production in Europe in 2014.

To optimise the utilisation of the biogas the way the European countries do, biogas produced by the biodigester should previously be upgraded in order to obtain biogas with 95% methane content, especially when the biogas is utilised for vehicle fuels or for distribution through natural gas pipeline.  Quality refinement of the biogas sometime is also referred as purification process.  Prior to the distribution through natural gas pipeline as well as for other purposes, there are at least three prerequisites:

Why does biogas need quality refinement?  And how can that be performed?

Raw biogas produced by the biodigester is the resulted of bacteria fermentation with a composition of methane (CH4), carbondioxide (CO2), hydrogen sulfide (H2S), vapour, as well as various other types of gases.  The presence of gases other than methane may in fact spoil the combustion system when used straight out of the production.  Hydrogen sulfide gas, for example, may lead to a corrosion of a gas piping system unless it is removed while carbondioxide gas, vapour, and other gases may lower the heating value of the biogas combustion.  Therefore, gases other than methane are often referred to as impurities in the biogas.

These impurities may be reduced using several methods, one of them is the scrubbing method that is by bypassing the biogas to absorbent or materials which may absorb those impurities.  Carbondioxide and hydrogen sulfide gases may be reduced using water scrubbing method.  Hydrogen sulfide gas may also be handled by using such absorbent in the form of active carbon, that is a carbon with an expansive surface which may then absorb more gases.  The biogas purification process from the hydrogen sulfide content sometime is also referred as desulfurisation process.  In the meantime, biogas humidity associated with the water content may be handled by using silica gel. 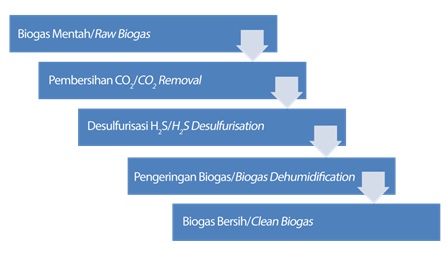 Once the biogas with 95% (or in accordance with each respective country’s natural gas standard) methane content has been obtained, then the biogas will be ready for distribution through the national gas pipeline network for other utilisation.  It is worth notice, however, should this processed biogas is to be distributed along with the natural gas through gas pipeline network, then the processed biogas must be treated with an odour or undergo an odorisation process.  This treatment is necessary in anticipation of leakage along the pipeline and thus it will be easily detectable.  However, in case the purpose is for generator fuel in the power plant or motor vehicle fuel, then the odorisation process may be skipped and used immediately.

Then what is the method for converting the biogas into electricity?

There are several methods available to convert biogas into electricity.

Among the three methods above, the third method is the one which is commonly used.  The reason is that this method enable hybridisation with other fuel and has the highest level of efficiency.  Pak Yusmin, one of the Domestic Biogas (BIRU) user, uses this third method to power his generator set both to produce electricity in case of blackout or to power his grass chopping machine.  Nevertheless, Pak Yusmin does not perform biogas purification process, and distribute the biogas directly to his generator set.  As a result, Pak Yusmin has to clean up his generator set fuel valve periodically from the deposit formed due to the sulphuric content of the biogas.

To utilise the biogas for continuous power generation, then the size of the biodigester shall also be large enough, depending on the power input required by the generator in use.  This is necessary to ensure that the amount of biogas supply is consistent to enable stable generator rotation.  Quoted from Trendsetter Report magazine, in order for the biogas to have an economic value, then the biogas produced shall at least in excess of 700 Nm3/hour, or more than 700 m3/hour measured on a room temperature and at 1 ATM pressure.  (Jihan A. As-sya’bani)