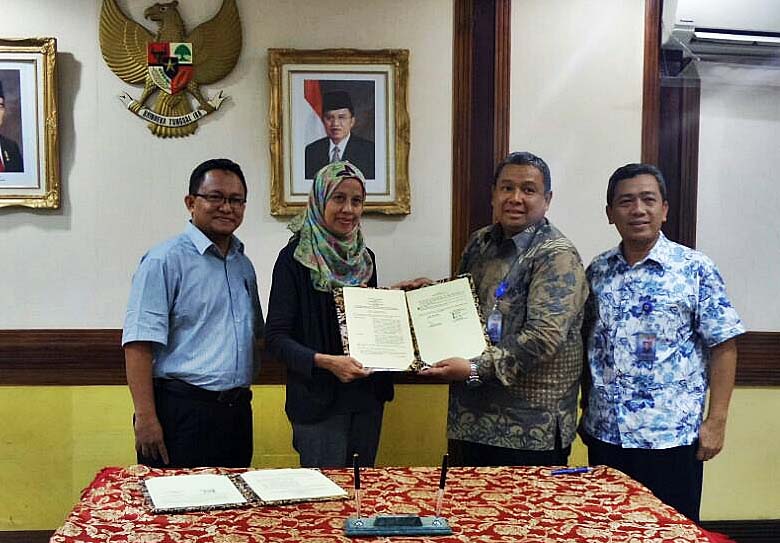 A signing of Memorandum of Understanding (MoU) between Perum Jasa Tirta (PJT) II and Rumah Energi with regard to the pilot project of effective technology development (biogas) to reduce and deal with the pollution of animal manures in Cisangkuy River, West Java had been signed on February 7, 2017. The Memorandum of Understanding (MoU) had been signed by Djoko Saputro, the CEO of PJT II Jakarta, and Lina Moeis, Executive Director of Rumah Energi at the Representative Office of Perum Jasa Tirta II (PJT II) in Jakarta.

This collaboration is closely related with the business sector of PJT II which includes among others water utilisation, maintenance of irrigation facilities and electricity powerplant, management of Watershed (preservation, development, water utilisation as well as water resources), and rehabilitation of power facilities.

One of PJT II obligations is to maintain the raw water quality (water originating from surface water, groundwater basin and/or rainwater which meets certain benchmark as raw water intended for drinking water). One of PJT II’s consumers is Indonesian Regional Water Utility Company. The company itself obviously expects raw water supply from PJT II which meets quality standard. Today, the water of Cisangkuy River is polluted by cow manures waste disposed by cattle farmers living in the surrounding area.

Embarking from such issue, PJT II subsequently established a collaboration with Rumah Energi to deal with the issue of polluted river water. “We strive to deal with the cow manures’ issue, by trying to find a simple solution, on how to turn these cow manures into a biogas by applying an appropriate technology. On an advance level, we are thinking of building a power plant powered by biogas,” uttered Djoko Saputro, the CEO of PJT II Jakarta, as he explained the basic principles of signing a Memorandum of Understanding (MoU) between PJT II and Rumah Energi.

The development of biogas technology pilot project is a reflection of PJT II concerns on conservation efforts through renewable energy. The expectation is for these activities to serve as a future example on dealing with waste management . PJT II has also encountered similar issues in other river such as in Cibeureum, Bogor. Even further, these activities are expected to be able to deal with domestic and industrial wastes.

In addition to utilising cattle manures by converting the wastes into gas energy, communities and farmers may also produce high quality fertiliers out of bio-slurry. One of PJT II missions is conservation, and one of the forms of conservation is by planting the trees. The needs for fertilisers’ supply for the trees or vegetation will be acquired from the constructed biogas reactors. Meanwhile, the market for the fertiliser is readily available, which is the PJT II itself.

“Not only high quality fertilisers, but also electricity power generation. The premise here is self-sufficient, how to fulfill operational needs out of activities developed through the utilisation of cattle manures,” Djoko Saputro revealed on the aspiration and dream of PJT II in the future. It also hopes to maximise renewable energy as a new company subsidiary.

On the other hand, Rumah Energi intends to expand the construction of biogas reactors throughout Indonesia, in addition to optimise the utilisation of bio-slurry as organic fertilisers in order to have commercial values and create demand by the community. With respect to these collaborative activities, “The expectation for this pilot project is to proceed as intended and applicable in areas surrounding other rivers, as well as provide multiple impact noticeable by both parties,” Lina Moeis, the Executive Director of Rumah Energi, explained on the expectation of the established collaboration. (KR)