We’re Not Just Here to Serve Our Husbands 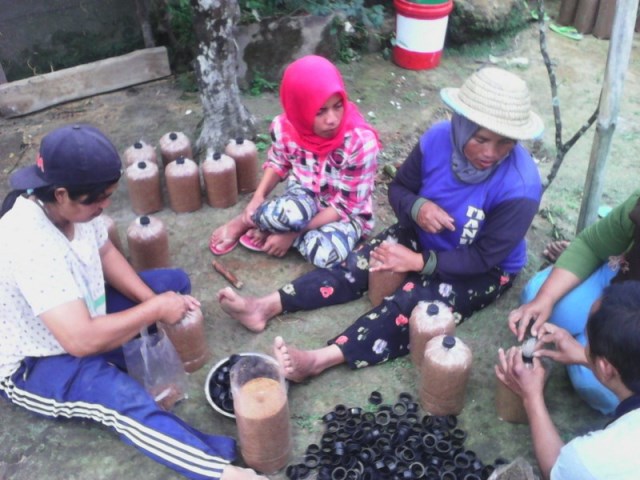 As we pull up to the household in Bangsal, Magelang Regency, Central Java, a group of mothers are already poking their heads out the front door. We step out, and suddenly the family house springs into action. A flurry of nine siblings, all female, take it turns to shake hands, all the while teasing and provoking one other into laughter. The old grandma gets involved too, with a sense of humour that frees the body from all apprehension.

Beware any single male, however – if found out, one of these mothers is bound to have a daughter, or a niece, whom she will not be shy to flog as the ideal bride.

Even grandma’s begun joking that she needs a man after her late husband passed away.

“This is the charm of an Indonesian village, the warmest of welcomes,” says Witono ‘Wiwit’ Sasongko, the Energy and Environment Programme Coordinator from the Yayasan Sion Salatiga (Zion Salatiga Foundation). For over a year, this organisation (the diakonia of the North-Central Javanese Christian Church/GKJTU) have been working with these women as part of the organisation’s mission to bring prosperity to the lives of rural Indonesians.

“We believe that with the little we have, we can still help a lot of people,” says Wiwit. “Our programmes focus on agriculture, since the majority of rural Indonesians are farmers.”

Five years ago, a group of 30-odd local farmers got together to form this particular women’s group Kartika Manunggal, which means ‘stars becoming one’. Since their inauguration, the group has received visits from UNESCO and from the governor of Central Java for the success of the white radishes, exported as far as Singapore and Hong Kong.

“In the village, women are the real backbone of the family,” says Ibu Ari. “We’re up before our husbands, cooking them something to eat, then we go out together gathering grass for the cows. We hoe the fields, and still have to make time to take care of the kids. I bet you that village women, especially during the planting season, have a busier schedule than the president!”

“What these mothers hope for, though, is that we’re not just here to serve our husbands. We want our own sources of income, we want to be able to get together, to relax, and to share knowledge.”

Recently, with the help of Wiwit, Kartika Manunggal have found a new way to do this with biogas.

“Biogas has been pretty good,” says Ari. “You only need a few cows to fill it, and we have loads of cows here. It’s cheaper, and we’re not forced to head to the shops every other day to buy LPG gas, we’re always aflame. The bio-slurry is also a great help.”

Before using bio-slurry, the fermented effluent that comes out of a biogas digester, Ari complains that her land was too acidic from all the chemical fertilisers. She says that by using bio-slurry as an organic fertiliser her crops take longer to grow, but are more resistant to pests, and last longer once harvested.

The women from Kartika Manunggal have also been using bio-slurry as a medium for sprouting seeds, after receiving information from Wiwit about the quality of the material. Previously, a sprouting medium would have to be carefully prepared from a mixture of chemical fertilisers and earth, but if the composition was wrong the plants could wilt and die. Dried bio-slurry, however, is completely safe on its own. Furthermore, any seeds still present in the cow’s manure are destroyed during the anaerobic digestion process.

Most pioneering of all, these women have begun using bio-slurry to grow mushrooms. 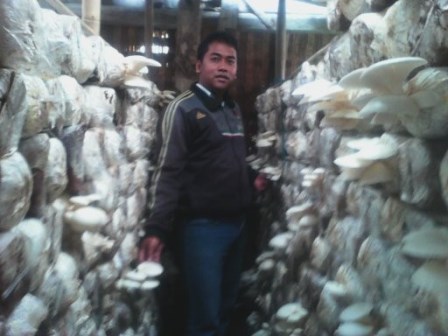 “We’ve been growing mushrooms for about two seasons now,” says Ari. “We used to use sawdust, not bio-slurry. The harvest is probably the same, but we save a lot in cost because we don’t have to buy anything. It turns out that waste can be useful. Why throw it out like we did before, when it has all these benefits?”

The use of biogas allows for near complete energy and agricultural independence. With little difference in results, Kartika Manunggal has shown an across-the-board reduction in costs, and therefore an increase in revenue. They’re also having fun, and sharing knowledge, by doing it together.

There is one problem, however.

“We only have four digesters here in our village, we could do with more,” Ibu Ari continues. “It’s great that we can come back from the fields and not have to worry about finding gas or wood, but I’d like to have enough gas to heat water for a hot shower. The mountain water is freezing here, people shower maybe once a day, and they’re only brave enough at midday. During the rainy season, sometimes we can’t shower at all!”

The room fills up with laughter, before descending into a debate with Wiwit on the correct use of soursop leaves as an organic pesticide for chilli plants.

Though our interview is now over, we’re not allowed to leave until we’ve been presented with a village feast. We load up on tempe, papaya leaves and fried fish until we are bursting at the seams. Grandma’s still going on about looking for a husband, and it sort of feels like we’ve been here for more than just a visit.

Suddenly, our hands are filled with three kilograms of mushrooms, and they’re not taking no for an answer. With the knowledge they’ve received, the women of Kartika Manunggal have been brave and taken risks to change their lives for the better. To refuse that would surely be a crime. (Joshua Parfitt)