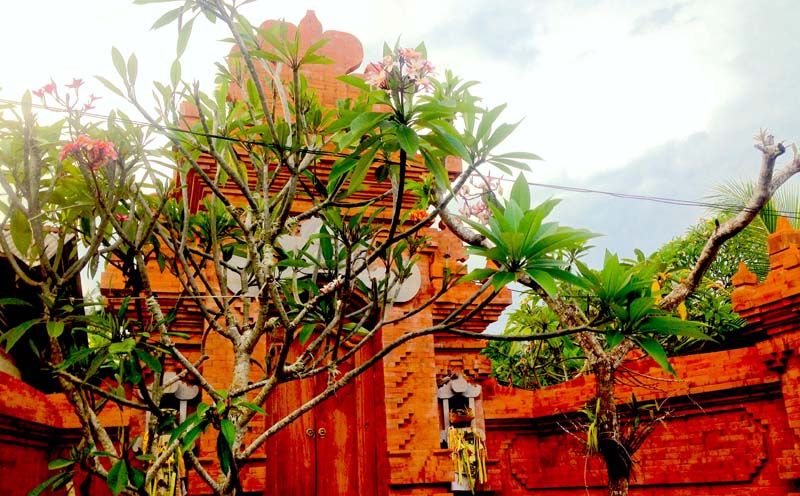 Construction has just finished on the front door in Batubulan Village, Gianyar Regency, Bali. Tightly packed red bricks rise up to the heavens adorned with delicate ornaments and offerings of flowers. The front door faces to the east. Behind a screening wall, a rich garden entwines with a series of buildings, all facing inwards towards a central courtyard – known as the natah. It is not clear where garden ends and home begins.

From the four central buildings – placed at each cardinal point – twice-removed aunts, distant brothers and uncles come to shake hands. Women carry babies plucked from various branches of the family tree. We’re in Bali – it doesn’t quite make sense.

Dewa Made Oka, the head of the household, is a retired teacher of religion. “There are many confusing things in this world,” he says, “but if we can make peace from the confusion, now that’s something beautiful.”

A strict order permeates the traditional Balinese household. Dewa Made Oka, explains how the arrangement of the buildings is based on the Tri Mandala philosophy. This philosophy maintains a tripartite division of space: nista mandala (lower realm), madya mandala (intermediate realm) and utama mandala (higher and most sacred realm). Tripartite divisions are common in Balinese culture, and can be applied to everything from architecture to spirituality.

Equally important are the cardinal points. According to tradition, the north and the east directions are considered most sacred, or utama. With the Tri Mandala working from north-to-south and east-to-west, this makes the northeast block the most sacred area: the place of worship. The southwest zone becomes the least sacred area: the place where pigs and animals are kept.

“Back in the olden days we had a lot of land, there were spaces between the compounds,” says Dewa Made Oka, “the pig-waste could be thrown out the back, no problem. Farmers waited for the waste to decay and took it to the rice paddies as fertiliser. These days houses are densely packed in, waste can’t be dealt with like before. People rarely keep pigs anymore.”

Dewa Weda, the Quality Inspector for Biogas Rumah (BIRU) in Bali, believes this is where biogas steps in.

“Biogas really fits in with the concept of a traditional Balinese home,” he says, “the south-east corner is usually left bare except for the pig-shed – the perfect place for a digester.” With the installation of a biogas digester pig-waste could be handled before causing an issue. Anaerobic digestion would turn the waste into a free cooking gas, which could be used to cook, or heat water for a hot shower.

Anaerobic digestion also turns solid material into a high quality, instant compost known as bio-slurry. Although many Balinese no longer farm, most compounds contain trees, flowers and grass. The bio-slurry could therefore be applied directly in the garden.

Dewa Made Oka’s home has successfully implemented this concept. Dewa Weda has high hopes that this approach will attract many new users to biogas. “According to our traditions the southern section of a compound is the domain of fire – that’s why the kitchen is usually found in the south. Biogas digesters also produce fire, so it really fits in with the Balinese conceptual world. People will find it easy to accept.”

Typically of Bali, everything is symbolic.

“This is one of the main issues Bali today though: how can we preserve our unique culture?” says Dewa Made Oka, “the old ways of life are being thrown away. Pigs are no longer have a place in the home.” Balinese architecture asserts that proper placement is paramount in achieving harmony with the three elements, known as Tri Hita Karana: Sanghyang Jagatkarana (God), Bhuana (nature), and manusia (humans).

Pigs, it turns out, play a role beyond mere symbolism. The animals are an investment for the family – they may be sold for cash, or slaughtered for events and ceremonies in the compound. Lesser known, however, is that kitchen scraps are given to the pigs to eat, reducing waste, keeping nature clean. BIRU, a project to recycle agricultural waste into something useful, finds itself a place in Bali again.

“The Balinese love to turn waste into something beautiful,” says Dewa Made Oka, “from fallen flowers, coconut and banana leaves we make offerings. Bali was zero-waste from way back – we just had a different name for it.”

It is now dusk, Dewa Made Oka’s wife comes out from the kitchen to gather flowers from the Frangipani trees. She walks between the banana trees and makes an offering to a monument in the centre-north of the compound – the shrine that looks after the compound. A mother takes her crying child out amongst the flowerbeds, fertilised with bio-slurry. Stone statues, silent carvings and shrines keep watch.

“Our ancestors bequeathed us with a beautiful culture, we need to find modern ways to keep it alive,” says Dewa Weda, before blessing our departure, “Om santi santi santi Om.” Peace in the heart, peace with the world, peace with God. (Joshua Parfitt)