The Spirit to Promote Organic Farming in Sumba 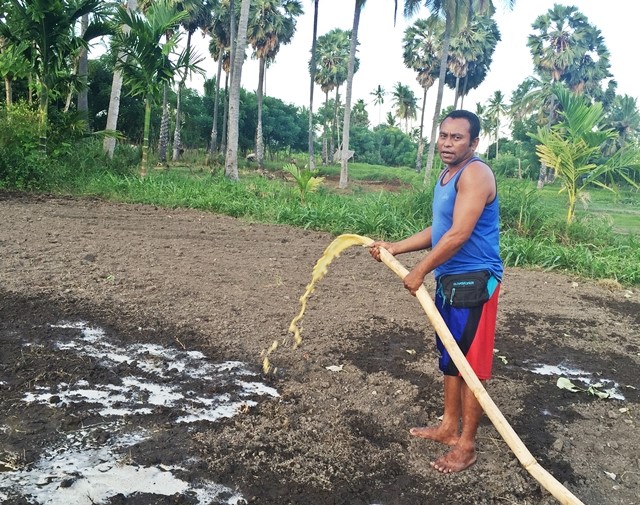 Jhon Lukas Ludji family lives in Mauhau Village, Kambera Subdistrict, East Sumba Regency, East Nusa Tenggara.  They are known persistent organic farming activists.  The arid land in their area has been transformed into an area suitable for crop planting.  The extent of 1.7 hectare land has been converted into a productive land suitable for integrated farming, which ultimately helps to improve the household economy.

Initially, the cultivated land was a rice paddy field intended to plant rice paddy.  However, ever since the irrigation channel is unable to distribute the water, then the land is converted into an dryland farming by relying on ground water (well) for horticultures and CGPRT crops.

In his farming activities, Mr. Jhon accomodates the meeting venue of farmers in his house.  The farmers’ group has been jointly established under the name of Saung Tani Lima Sejahtera.  This venue as the same time is used as a sales outlet for improved seeds suitable for Sumba’s climate.  During these activities, Mr. Jhon also let his wife to form a women farmer’s group by embracing housewives living around their house.

Mr. Jhon also raises several different farm animals such as cows, water buffalo, pigs, goats and poultry.  At the end of 2015, he built a Domestic Gas reactor to utilise the manures of the farm animals that he raises.  According to his wife, Mrs. Seni, the presence of biogas furnace has helped her a great deal in the kitchen activities as she no longer has to collect firewood and dealing with kerosene with its unreliable supply.  Today, she has more time to care for the household and her children.

Since 2016, Mr. Jhon started to utilise the bio-slurry organic fertiliser (biogas waste product).  He started to utilise the waste product after receiving a training from Rumah Energi.  After practicing and witnessing the result himself, he then no longer use chemical fertilisers.  His decision to entirely switch to bio-slurry organic fertiliser turns out to be the solution to deal with unreliable supply of chemical fertilisers.  Additionally, Mr. Jhon no longer needs to allocate a dedicated fund to buy the fertilisers as all of his fertiliser’s needs have been fulfilled by bio-slurry.

According to Mr. Jhon’s observation, crops fertilised by bio-slurry fertiliser tend to be more resistant against the phytopathogen, lives longer, has a better yield, while the leaves and the fruits are not easily perished even though they are not stored in the refrigerator.

Through GADING Programme, Mr. Jhon has also started to develop freshwater aquaculture and duckweed cultivation.  Following a number of experiments and failures in cultivating the duckweed, he finally found out that solid bio-slurry fertiliser is more suitable for duckweed cultivation in Sumba rather than using a liquid bio-slurry.  After applying these methods, duckweed cultivation is easier than ever.  “I rely on duckweed to feed the fish, pigs, and poultry on a daily basis.  Except for the catfish, I no longer need to buy fish feeds,” mister Jhon said.

Other than for self-consumption, Mr. Jhon Ludji also sells a fermented bio-slurry at a price of Rp 10,000 per liter.

Bio-slurry produced by his blending is sold in Waingapu and surrounding areas up to Southwest Sumba.  Buyers who purchase vegetable seeds, tomato, papaya, and so forth will receive a free 1-liter bio slurry.  He will even explain how to use the bio-slurry. By this method, he intends to improve the sales of the plant seeds and bio-slurry and at the same educate the communities on the benefits of biogas and bio-slurry.

The primary income of the family is generated through selling vegetables other than fermented bio-slurry.  Mr. Jhon no longer needs to bring his farm products to the market as consumers normally will come directly to his house.  His net income approximately is Rp 7 millions per month.  “We use the income to purchase lands to expand the farming ground, send the children to school, and other household needs.  We are convinced that hardwork and prayer will ultimately lead us to success,” Mrs. Seni said.  Mrs. Seni is involved in financial aspects and managing family finance.  Decision made in the household is also a joint decision. 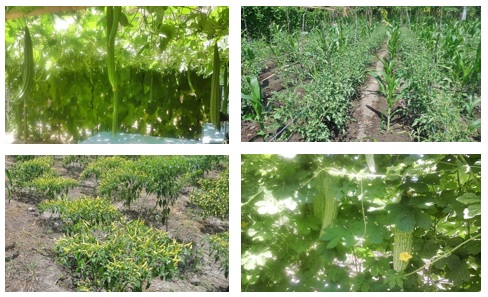 A variety of vegetables on Mr. Jhon Ludji’s farming ground which relies on bio-slurry organic fertiliser.

The Jhon’s family has been considered as a family role model by the surrounding community. Comparative study on integrated organic farming often time is organised at his residence.  There are numerous institutions (agriculture school, NGOs, and farmers’ groups) visiting his place to obtain the knowledge on how to optimise the farmland.  Additionally, his farm produce has been declared as the best example on the exhibition organised by the local government of East Sumba Regency in 2016.