Let’s start this story with a statement made by Kofi Annan:”Gender equality is more than a goal in itself.  It is a precondition for meeting the challenge of reducing poverty, promoting sustainable development and building good governance.”

Apparently it is not too much if such a statement is aligned with the enterprise of a women’s community in Kampung Areng, Cibodas Village, Lembang Subdistrict, West Bandung Regency, West Java in their attempts to enhance the roles and women’s self-sustanance for the benefits of the household and the community.

Starting from a large number of biogas reactor construction in Kampung Aren on mid-2011.  The workload and responsibilities of women as firewood collectors to meet the end meets of the household and the needs to tend the dairy cows have been reduced.  Having more spare time has led the women in the village to create opportunities through the utilisation of bio-slurry to help enhance the family income.

Initially early on 2012, several women in Kampung Areng tried to enhance the benefits of bio-slurry by engaging in an activity to produce vermicompost.  Bio-slurry is known and proven to be a suitable food for the earth worms.  There are no significant problems in terms of technical aspects with respect to the vermiculture.  However, lack of marketplace to accommodate their harvests have led some women to abandon such activities.

Eti Rohaeti (37) is one of the women who insisted to devote herself to vermiculture activities.  At the time she used a kascing as an organic fertiliser made of worm for her family’s vegetable farming activities.

The Roles of GADING Programme

The introduction of GADING Programme, has made Eti and her friends felt that there is a means and guidance to disseminate the benefit of biogas of biogas waste management through vermiculture.  Gender training delivered by GADING Programme has also brought in the new insight and spirit to embrace women from the surrounding areas and women from any other areas to be more empowered and self-sustanance.

As an example is Lilis (42), one of the beneficiaries of GADING Programme.  She was initially invited by Eti to participate more in the program activities.  During the last meeting, she admitted to have enjoyed the benefit and transformation for herself and her family after participating in a series of training and GADING Programme activities.

“After participating in GADING Programme, I was inspired to improve my roles even more within the family.  Initially, I was only try to help, that is helping my husband in his cattle farming and farming businesses.  Now my husband and I agree, that vegetable farmland and vermiculture are my responsibilities, while cattle pen/cattle farming are my husband’s responsibility,” utter Lilis.

“Focus and segregation of duties are the secret,” she uttered convincingly.

The introduction of GADING Programme in Kampung Areng has evoked the women’s spirit to be more productive and empowered.  Eti’s and her friends’ campaigns to earn additional income, have been greatly welcome with a higher production level and the available marketplace for her community’s vermiculture.  Even today, a relatively large company is among the buyer. 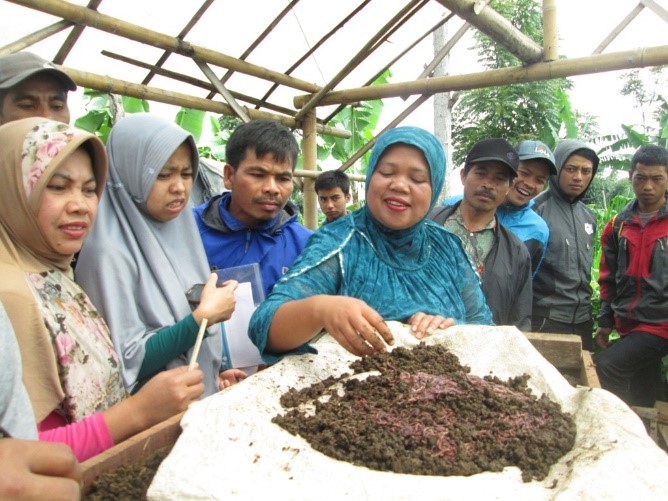 Eti (center, with a blue headscarf) is teaching a vermiculture method to a community group

Along with their efforts, Eti’s and her friends’ campaign expand way beyond additional income.  Through eco-friendly vermiculture business and farming practices that they do, Eti and her friends have invited the general public to be more ecologically friendly and responsible toward the ecological management.

As an outcome, Eti and her friends today welcome the visitors, not less than twice a month, who wish to learn or wish to find out more about the community activities.  The visitors come from various society, government agencies, media, universities, and so forth both domestic visitors and international visitors.