The Importance of Building Future Energy and Food Self-Sustenance 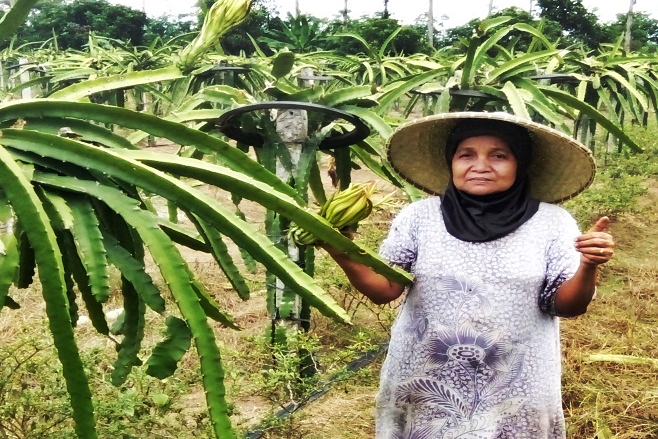 PT. Great Giant Pineapple (GGP) is a company engaging in pineapple processing industry situated in Central Lampung. Back in 2014, PT. GGP has provided its support on Domestic Biogas reactor construction to Haji Ibrahim as the owner of Pondok Pesantren Anwarul Qur’an and Haji Badrus Salam, who represents a boarding school in Terbaggi Besar Village, Lampung Tengah Subdistrict, Lampung Province. PT. GGP provides assistnce on biogas construction to improve farmers’ income through the utilisation of biogas and bio-slurry in the local areas.

As a BIRU representative in the Lampung Province, we were given an opportunity by PT. GGP to pay a visit in order to directly witness the constructed biogas reactor as of 2016 while also visiting Pondok Pesantren Anwarul Qur’an to learn about the biogas utilisation in its farm fields.

Early in 2014, one of the few students from the boarding school put the bio-slurry to use as the fertiliser for their water spinach crop. Additionally, bio-slurry is used also in the cultivation of cassava crops. The use of bio-slurry has significantly improved the yield on that 5,000 square meter field. “It may yeid between 80 to 100 tons of produce during the harvesting period,” according to Mrs. Karomah, one of the employee there.

However, around mid-2015, the cassava field is converted to a dragon fruit vine, hoping that the revenue will improve.

It is evident that the dragon fruit vine may be harvested twice a month. The fruit is sweeter than ordinary dragon fruits. Total revenue generated from the 5,000 square meter parcel of lands is between Rp 1,000,000 and up to Rp 2,000,000 with a total weight of fruit harvested reached up to 60 kilograms. “The lowest revenue generated is Rp 700,000 during the second harvest period. The harvest was significantly lower due to extended dry season,” Mrs. Karomah explained.

Unfortunately, during our conversation, the BIRU team was unable to directly meet with Haji Ibrahim’s two employees who recently resigned from the jobs. They were the ones who extensively used bio-slurry for the dragon fruit crops for almost one and a half year.

Other than its utilisation as fertilisers, Mrs. Karomah works as a cook, along with other santri who enjoy the greatest benefit of manures’ processing as biogas, as the gas produced may be utilised for cooking purposes.

There are so many benefits which may be enjoyed through the biogas construction. However, it is undeniable that not many people are aware on the many benefits and advantages. Especially the long-term use of chemical fertilisers which may be harmful to the soil, turn the soil into arid and nutrient deficiency while it may inhibit plant growth.

This may be a chance to restore the natural conditions around us, that is by construcing biogas reactor, in order to preserve the nature in years to come. Biogas as an eco-friendly technology which provides more than just an alternative energy. It is also able to drive a sustainable agriculture. PT. GGP is committed to engage in environment and natural preservation efforts. Together with Domestic Biogas, it is expected that eco-friendly waste processing may bring in a blessing to the community and provides a sustainable benefits. (Eliawati)