Will the Government Fund the Future of Biogas? 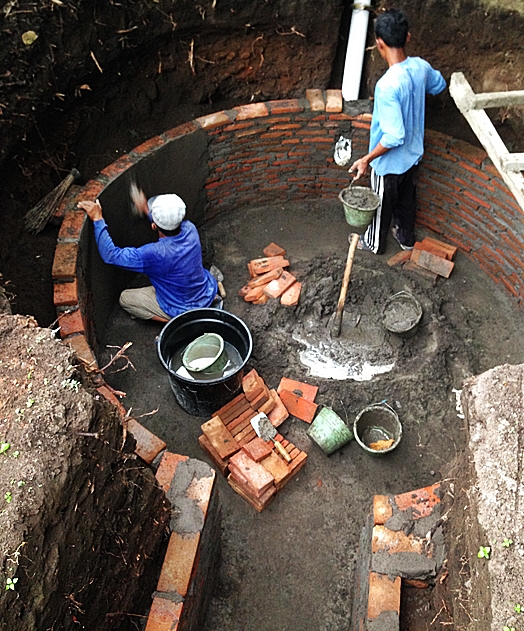 The Domestic Biogas programme (BIRU) has been championing an alternative approach to renewable energy. The programme was set up back in 2009 with the help of SNV and Hivos, two experienced development organisations from the Netherlands. Robert de Groot, Green Energy Coordinator at Hivos Regional office South East Asia, says that, “development is often successful during the time of its intervention, but soon the project is closed, it is evaluated, everyone is happy, two years later though nobody is using the digester anymore.”

The solution, according to Hivos, is with a market-based approach. Instead of handing out digesters for free, the BIRU programme requires that users purchase them with their own money. This creates local demand. BIRU then establishes relationships with Construction Partner Organisations (CPOs), trains their masons, and sets up independent workshops to manufacture digester parts. This creates local supply.

There are many benefits to this approach. Firstly, the biogas sector becomes profitable, secondly, local biogas products are of high quality, and so do not rely on interventions from Hivos. According to de Groot, biogas is “only sustainable with a market-based approach”.

This year, however, has seen one of BIRU’s CPOs, Pusat Inkubasi Bisnis Usaha Kecil (PINBUK), win a government tender for the building of 600 biogas units. These 600 units are funded by 7,2 billion rupiah from the Special Region of Yogyakarta provincial government’s annual budget, meaning that the user is not required to make a purchase. Previously, BIRU have systematically rejected acknowledgement of government-funded biogas, but they are now changing tactics.

Mas Dwi, the Executive Director at PINBUK, is enthusiastic about the opportunity. He says that it is the government’s obligation to create a prosperous society, a mission that is also shared by PINBUK. “If the government has the budget, why not reach a synergy? Imagine we are all going to Jakarta, but I am going by bike, and you have a train, isn’t it much more effective if I hitch a ride?,” he explains.

An outcome of this partnership is that PINBUK can influence government policy. For example, discussions between Hivos and another of BIRU’s partner organisations resulted in the establishment of a national standard for biogas digesters (SNI 7826-2012). This design, identical to BIRU’s design, has become part of the requirements for government biogas projects. Only 2% of BIRU’s digesters have been reported as structurally faulty to date.

PINBUK are currently working on proposing that a license for biogas masons be established, which could further solidify the quality of government-funded biogas projects.

Another way to influence policy has been experimented by Willem Leang, BIRU’s Provincial Coordinator for Central Java. He has personally seen the free distribution of biogas units go to waste. “Grants only spoil a community, there’s no creativity, no effort, if someone pays out of their pocket, only then they will take care of the installation” he says, “that’s why in Rembang I tried a different approach.”

Pak Willem trialed a policy in Rembang, Central Java, where in 2013 PINBUK won government funding for 25 biogas units. This policy required that preliminary digging must be shouldered by the user themself, and that food and drink must be supplied to PINKBUK’s masons and workmen throughout construction. Each user must be involved from the start, so they can learn how everything works, and a sense of ownership is created.

This approach has been applied by PINBUK to their new venture. “When it rains we don’t mind the water going to waste,” he analogises, “but when we collect water ourselves we take care of it. So the question is how can we ensure proper management of the digesters?”

The project, which was tendered in May 2016, has now seen about 300 digesters completed. The remainder should be finished by the end of November this year.

On the telephone to BIRU, de Groot expressed his support for this win. According to him, this victory should be a victory for the BIRU project in general, one of its CPOs has proved itself capable at the government level. “The biogas market doesn’t have to be controlled. If they find work outside that’s actually amazing, it will strengthen the sector,” he says.

Despite this, de Groot does not deny that the issue could present some concerns. He admits, “it could be challenging convincing people not to just wait for the next digester.” Ideally he believes that policy could be influenced to require at least 30% of the cost of a new reactor be funded by the user.

The benefits of government biogas programmes entering into the BIRU database are many. BIRU ensures after-sale support and a three-year guarantee, offered to biogas users so long as their digesters are built to standard by a trained mason. (Joshua Parfitt)