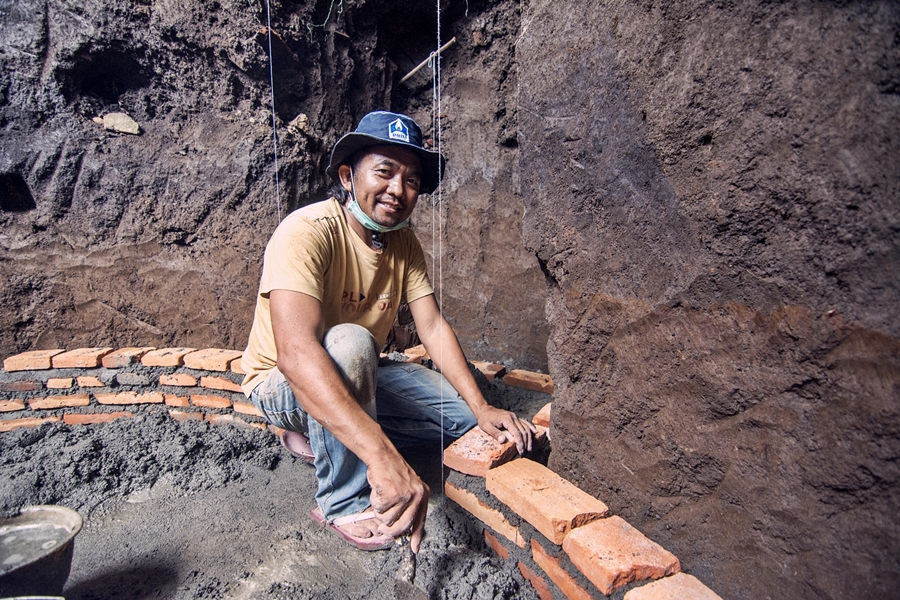 One cold afternoon greeted us when we visited Lebo Hamlet, Madiredo Village, Pujon Subdistrict, Malang District, East Java. Lebo Hamlet is situated at the South Side of the foot of Raden Soeryo Forest Park. The site is situated at 1,200 meter above the sea level, this area has a cold temperature with an inclination to cool temperature. Drizzles and mists are experienced daily by these village inhabitants.

“I am sorry, I do not feel well, my body needs more rests. I have been staying home for the last two days.”

Those words were uttered by Suprapto who is fondly known as Prapto, a 42-year old biogas mason with Sinau Andandani Ekonomi Cooperative in Pujon. He is a native inhabitant of Lebo hamlet. His primary job is a mason. He has been learning the trade since his teenage years. A father of one child began his story. His involvement in biogas reactor construction has been initiated since 1999. At the time, his neighbor invited him to work as a mason, building 27 units of “jug-type” biogas model at a rubber crop plantation in Kalibaru Subdistrict, Banyuwangi District, East Java. He worked as a mason assistant back then.

“I learned about biogas reactor from my neighbor. I never participated on a biogas technical training, for the knowledge about biogas was a secret,” Prapto explained.

Once when Prapto worked to build a house of Nurkayin, an employee at SAE Pujon Cooperative, which has just formed a partnership with Domestic Biogas (BIRU) Programme. Nurkayin was looking for a mason who was to be trained as a mason for a biogas reactor and offered the opportunity to Prapto. Prapto immediately accepted the offer. He briefly asked himself, ”Is the knowledge about biogas no longer a secret today?.”

On March 2010, he finally participated on a training activities for BIRU mason in Pujon for eight days. Based on the training, he finally learned that there was nothing secretive nor complicated about the biogas.

“Biogas is in fact very simple. BIRU reactor is simple and easy to build as long as you follow the standard, easy to operate, and easy to maintain.”

Prapto continued that during the training he finally found out that building biogas reactor demands serious preparation. There are requirements and standards to meet. There are forms supplied by BIRU Programme and other things to complete.

“Unless we follow the guidelines, the stove may not work as intended, and abandoned as a monument,” Prapto uttered enthusiastically.

Upon completing the training, Prapto built a single unit in Pandesari Village, which left him with an impression. It was rainy season and the site was watery. A shallow excavation of one meter, will be enough to bring out the water. As a result, a construction time which was supposed to complete within six days, faced a delay and ultimately took 10 days to complete. He admits that he was stressed out as he spent more of his energy and mind on removing the water at the excavation site.

As of February 2015, Prapto has built 124 units of BIRU reactors, all of which were recorded on his notebook, including complaints and issues encountered by biogas users and improvements he has made. “It was part of the mason’s responsibilities over the reactors he builds,” uttered Prapto laughingly.

“The responsibilities of the mason?,” BIRU Team incited.

“BIRU provides three years warranty for every reactor constructed and it is the cooperative that delivers the guarantee. However, it is the mason who performs the repairs in case of any problem arising. Therefore, I constantly remind my fellow masons to work in accordance with BIRU standards as we are the ones who have to “bear” the three years warranty. Ultimately, it is the responsibilities of the mason, isn’t it?,” Prapto expressed as he burst into laughter.

Prapto keeps a habit, that is during the initial filling of the reactor by the biogas reactor user, Prapto will teach them how to properly fill the reactor, operational methods, and brief maintenance. He will then write down his telephone number in the manometer installed in the kitchen near the stoves. Therefore, it will be easily spotted by the user in case of problem arising which will then enable the user to immediately contact him. According to him, the user should receive a brief explanation as they will use the biogas reactor on a daily basis, immediately upon functioning. If the user has to wait for user training session, then they will have to wait for another 3 months.

He has once experienced a bad experience when building a biogas reactor for Pak Rokhim, one of cooperative member.

“The biogas reactor would not burn, he called me furiously. I came to his place and was greeted with a scolding, which more or less was that he lost the money by building the biogas reactor as it turned out that the reactor produced only a very small amount of gas,” Prapto explained as he recalls the incident.

It turned out, that the biogas reactor was filled with too much water. “He then taught the proper way of filling the reactor, but it kept happening again and again. I then had an idea, and I invited Pak Rokhim to see the biogas reactor belonging to his neighbor without such problems. His neighbor explained to him on the importance of filling the reactor properly, and ultimately Pak Rokhim accepted the explanation. Since then, the problem with his biogas reactor has been eliminated,” Prapto explained.

Throughout these times, according to Prapto, most of the complaints and issues encountered are due to improper way of filling the reactor, incorrect position of water drain installed by the mason, leak pipeline, and leaked air duct on the modified stoves.

Prapto is very popular among the cattle farmers who are biogas users in Pujon area, as he will not hesitate to immediately come upon receiving a telephone call from a biogas user. Prapto admits that initially he only serves the biogas users where he built the reactor. However, as times go by, other users who encounter problems with their biogas reactors started to contact him even though he did not build the reactor. According to him, the users will almost certain contact the mason in case of problems with the biogas reactor. In case the mason did not immediately respon to the call, then they will contact the cooperative who will then ask the respective mason. In case the respective mason did not immediately respond, the cooperative will then look for another mason who is willing to deal with the issues arising from the biogas reactor. And it is Prapto who is normally contacted by the cooperative.

“Initially I felt uneasy, and I used to contact the original mason to ask for his ‘consent.’ Now I go straight to the home of the biogas reactor users once I receive a telephone call.”

One thing that Prapto is worried about is the scolding of the user of the biogas reactor, as it keeps Prapto awake in the middle of the night. Therefore, even though he is busy with building a new biogas reactor, Prapto will abandon the task at hand shortly just to resolve the issues encountered by other biogas reactor users. Prapto has even once pumping the gas pipeline as it is inundated with water, to enable to immediately restore the biogas reactor’s functions. He will deal with the pipeline and water drain issues until it is completely resolved. When he receive a telephone call from the user during the night time, he will immediately respond to the user, as long as it is before midnight.

“I just consider it as maintaining relationship …,” Prapto said jokingly.

There is another experience that he remembers very well. A biogas reactor user whose name he did not know sent him a text message. At the time, he only activated his mobile phone one hour after midnight and he found out there is a text message sent early on the evening. He felt guilty because of that.

My biogas reactor is not functioning due to a mouse bite, the text message reads.

Early on the following morning he visited the home of the user, and it turned out that the family had to skip breakfast due to the issue encountered by the biogas reactor. Prapto immediately apologised. Ultimately he discovered the cause of the problem, which was the water in the manometer bursting out and led to the complete evaporation of the gas. As the manometer hose was quite long up to the rooftop, Prapto had to go up to the roof and found out a mouse bite somewhere along the hose.

“It turned out that the user thought the evaporated gas was caused by a mouse bite on the hose. Hahaha …” Prapto told the story with a big laugh.

Prapto chooses to be a biogas mason rather than just an ordinary mason. For him, being a biogas mason is more attractive as he can perform the job close to his home, in addition to the higher pay and he feels that the job is suitable for him. His monthly income ranges between Rp 2-4 millions depending on the demand for biogas reactor in Pujon.

Suyoko, the Biogas Supervisor at SAE Pujon Cooperative gave his confirmation that Prapto was one of the favorite biogas mason among the cattle farmers of Pujon cooperative. There are plenty of potential biogas users who asked Prapto’s service to build their biogas reactor. According to Suyoko, only masons with satisfactory performance and good in identifying potential biogas users win the prospects.

Asep Mukhlas, the Quality Inspector of East Java BIRU Programme has also given his confirmation on the reactor built by Prapto. There were only two types of mistakes that involved Prapto’s work, namely overflow mismeasurement and slanted mixer position.

“Even then there were only three cases, and it happened at the beginning, he has then rarely made a mistake on the construction process,” Asep described.

Prapto himself wishes to continue his career as a biogas mason, and if possible he wishes to build biogas reactor outside Java.