Sweet Probiotic, Abundant Benefits for the Farmers and Goat Farmers 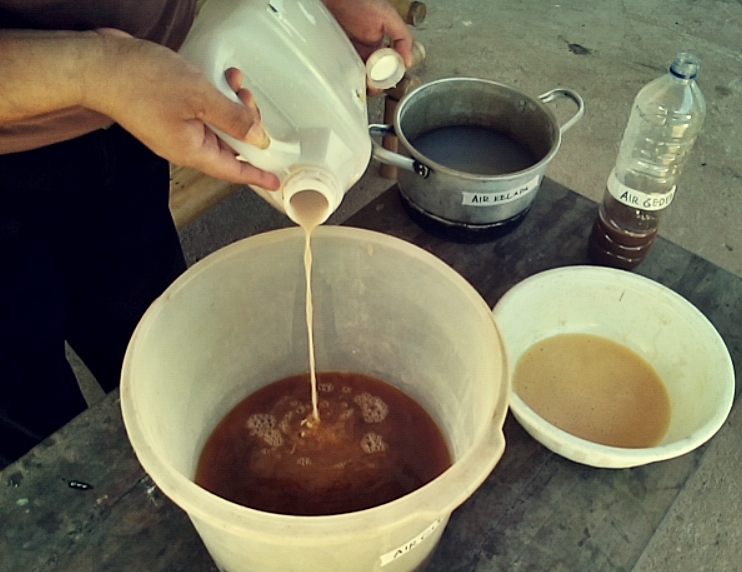 Origin
Mohammad Makruf, 50 years old, is a natural farming activist.  He is a member of Sri Lestari Organic Farming Group and is known to be a dilligent and tenacious man.  Together with his six other farmers, he became the pioneer of natural farming in DAM KB VI Region, Pekalongan, East Lampung.  Since its establishment back in 2004, Sri Lestri Organic Farming Group has partnered with Yayasan Lembaga Pembinaan Masyarakat Desa (YLPMD) in Lampung to educate farmers in the rural areas.  Father of three children, is the son of Mr. Salimu, a prominent religious leader at Block 25 Hamlet, Adijaya Village, Pekalongan Subdistrict, East Lampung District.  He is the village officer for religious affairs in which he had been the supporter of natural farming while he was still alive.

A golden opportunity knocked on his door back in 2007 when there was an invitation to participate in a natural farming training at Sigong Village, Banjarnegara District, Central Java which was initiated by Sekretariat Bina Desa (SBD) in Jakarta.  It could not be more exciting, when you are highly passionate on learning about the natural farming, and all of sudden there was an invitation to learn more as well as the chance to meet with other natural farmers from different parts of the country.  During this event Mohammad Makruf met with Mustakim, a farmer from Lamongan, East Java which gave him the recipe for preparaing the phenomenal probiotic.  Upon his return to Lampung, he shared the recipe with his friends and expected that all farmers and goat farmers would eventually learn how to prepare a probiotic by themselves so that they will no longer need to buy as the process is simple and affordable.

As of now, hundreds of farmers in Lampung are skilled in preparing probiotics in which the functions exceed beyond liquid fertilizer, but is also able to neutralize pollution produced by farming activities, preparation of Microbe III, and compost starter.

Integration with Domestic Biogas
Two large size bucket with a 20-liter capacity have been neatly arranged on the side of the goats’ shelter.  It looks like they have just been filled with goat’s manure and clean water.  A distinctive smell similar to a succulent rice cooked in the coconut milk escaped from a 1.5-liter size bottle as a starter to decompose the goat’s manure.  The mixture inside the container will be poured through the inlet of biogas reactor after being soaked for two days.

It was Budi Wahyono, 40 years old, YLP 0043 Domestic Biogas (BIRU) user from Sawo Jajar Hamlet, Batangharjo Village, Batanghari Subdistrict, East Lampung District, the owner of 43 goats.  His initial attraction to BIRU was in 2013, but somehow he had to delay because of the cancellation of the credit program and his digester excavation was abandoned for almost two years.

The encouragement of his friends has led to the completion of the reactor construction on February 2015.  The bold step that Wiwik Damayanti’s husband take in constructing the reactor fed by goat manure was partly due to his knowledge prior to constructing the biogas reactor about the benefit of probiotics from Mohammad Makruf.  The production of the probiotic at the time was intended to eliminate the pollution at the animals’ shelter by spraying the liquid on top of goat’s manures under the shelter.  When he collected the goat’s manures to be transported to the rice paddy fields, the goat’s manures crumbled and were no longer on their original states.  Since then, he was convinced that the biogas may be fed with goat’s manures.

The result is easier filling due to the decomposed goat’s manure although he has to provide additional containers.  Moreover the gas produced is far greater which sometime caused the water indicator in the manometer to spurt due to the high pressure.

In addition to utilising the probiotic, the father of a child also prepares the nutrition of spices which he mixes with the minced grasses, which has made his goats to eat voraciously.   When we see the goat’s shelter, we will not find feed leftover.  The goats completely devoured them.  These are the characteristics of healthy goats.

How to prepare probiotics

Preparation method:
1.    Put the sugar and 1½ liter of water to boil, leave it to cool, and beat the eggs and yolks until it becomes thick, fluffy and triples in volume.
2.    Mix the bran with 2 liter of water, squeeze them and put them through a sieve.
3.    Mix all materials and pour into a bottle or jerry can, seal it tightly, put it in a shady area for 5 days to 1 week (remember, that the bottle will harden, anytime you open it).  Sweet frangrance maybe an indication that the probiotic process is complete.

Use on liquid fertilizer
1.    Mix 1½ glass of probiotics with 14 liters of water and nutrient’s mixture.  Spray on rice paddy fields/corn fields.  One planting season requires 7 spraying sessions.
2.    Spray them on the animal shelter 3 times a week.
3.    The functions of probiotics are similar to Microbe II.
4.    To decompose the content of biogas, simply soak the goat manure with clean water in  a container suitable with the biogas capacity.  Then pour one glasss of probiotics and seal the container tightly.  Leave it between 3 to 5 days and pour it through the inlet and mix accordingly.

Fatah Yasindan
Yayasan Lembaga Pembinaan Masyarakat Desa (YLPMD)
Not a probiotic seller, but will gladly share the information on how to prepare a probiotic.
Mobile No. +62 (813) 69073195
E-mail:  ylpmd_lpg@yahoo.com