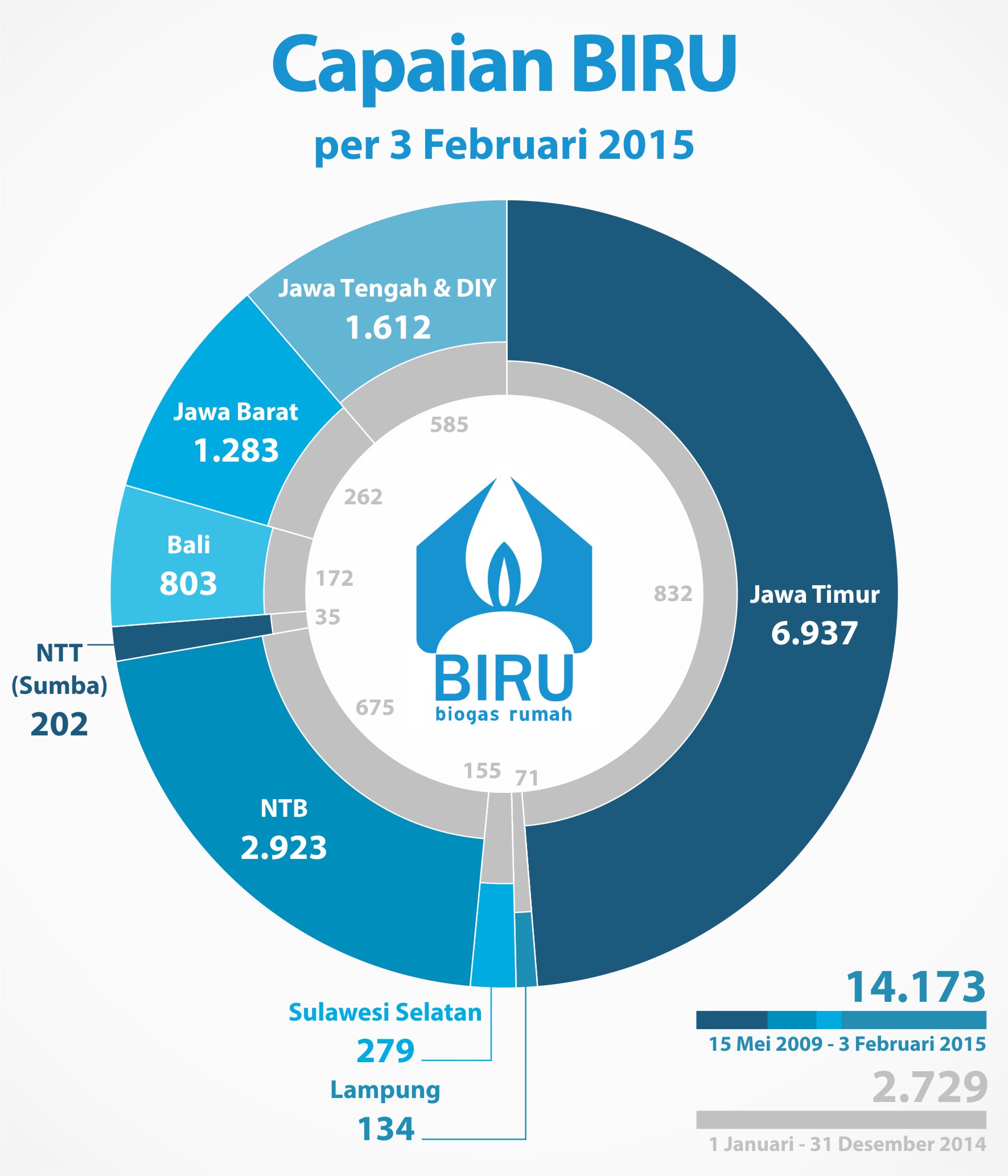 More than 70,000 Indonesian have gained benefit from 14,173 unit of BIRU reactors that constructed up to February 3, 2015. The household-based technology that processing dung of cattle, pigs and poultry is a Hivos programme that managed within a partnership framework Yayasan Rumah Energi (YRE) and SNV. The programme is also one of the Directorate General of Renewable Energy and Energy Conservation (DJEBTKE), the Ministry of Energy and Mineral Resources of the Republic of Indonesia who coordinates and encourages potential local governments in developing biogas to actively participate in developing BIRU programme in their respective areas. BIRU was initiated in 2009 by the Royal Netherlands Embassy and cooperate with local institutions as partners to build and promote the modern forms of renewable and sustainable energy for the people of Indonesia.

With the support of the Embassy of Norway and EnDev initiative(Energizing Development), BIRU is currently working in 9 provinces in Indonesia: Lampung, West Java, Central Java, Yogyakarta, East Java, Bali, West Nusa Tenggara and East Nusa Tenggara (Sumba ), and targeting the expansion of the working area to at least four provinces in 2015.

Indonesian farmer families who have used BIRU are no longer need to worry about the rising price of conventional fuels. The gas need is already fulfilled, directly from their own cattle sheds. One of BIRU user from Lembu, Bancak, Semarang said she has never bought LPG for daily cooking needs. “Now we have our own source of fire for cooking and lighting,” said Sriyatun (35). In her village, 96 biogas reactors were built and led the village earned an award in Central Java level in 2014: Desa Mandiri Energi (Energy Independent Village).

In addition to these benefits, the results of the survey conducted in 2013, BIRU users said their house environment become healthier: less smoke in the kitchen (79%), cleaner kitchen (72%), cattle sheds are also cleaner (69%). “The smell was reduced by 75-80%. No complain from my neighbors anymore. We are satisfied with BIRU, “said Abas (54), a broiler breeder in Sodo, Pakel, Tulungagung, East Java. He started poultry business since 1999 with a population of 1,000-2,000. Before using BIRU, he was complained by his neighbors because the smell of the livestock.

Biogas has other benefits. Initial reports from Soil and More International in a feasibility study about the role of bio-slurry (biogas residue) in support of Climate Smart Agriculture in Indonesia indicates potential carbon reduction between 2-7 tonnes of CO2e / ha / year if farmers use bio-slurry. Bio-slurry, either liquid or solid, is an excellent organic fertilizer to fertilize the soil and increase crop production. Some BIRU users also use bio-slurry as a mixture of vermicompost fertilizer, bokashi fertilizer, media of mushroom cultivation, fish and eels feed, with satisfactory results.

BIRU has also been registered in the scheme of the Gold Standard carbon credits since 2013 and received the recognition that each constructed reactor were expected to reduce emissions of about 3 tons of CO2e per year.

With more than 50 partners and more than 1,200 trained masons and supervisors, BIRU has increased the potential of biogas sector to develop and bring a lot of benefits for people of Indonesia. Hivos, YRE, SNV together with DJEBTKE, are committed to continue promoting the renewable energy to achieve high-quality clean energy and can be used easily by people of Indonesia.