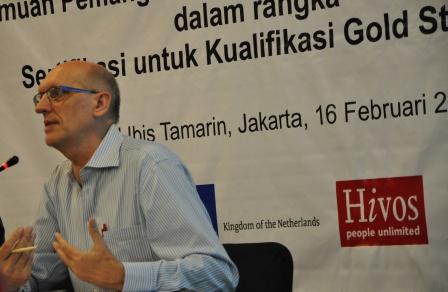 The meeting of local stakeholders to discuss BIRU’s Gold Standard certification was attended by representatives from the Ministry of Energy and Mineral Resources at both national and provincial levels, BIRU’s construction partners, economic cooperatives working in the dairy sector, and other related agencies. The meeting was held on Thursday, February 16, 2012, in Jakarta, and Hivos, a Netherland-based, non-government organization that has been managing the program, conducted a public consultation regarding the mechanism of carbon trading.

Indonesia still highly relies on fossil fuels despite the fact that the deposits are becoming more and more limited. The growth of energy consumption at 7% per year has not been balanced out by a sufficient amount of energy supply. According to Maritje Hutapea, the Director of Bio-Energy at the Directorate General of New Renewable Energy and Energy Conservation (DJEBTKE), when she made her presentation regarding the correlation between BIRU and national energy policy, the utilization of renewable sources of energy and the implementation of energy conservation have not been maximized.

“We support BIRU because this program is in line with the national energy policy,” Maritje Hutapea said during a presentation about the comparison between the need for and the supply of energy in Indonesia. According to her, Indonesia aims that in 2025 at least 25% of national energy need is supplied by local bio-energy sources. The government’s earnestness has been shown through the placing of bio-energy development as fifth on the list of DJEBTKE’s main agenda.

As a program that gives access to an economical and convenient source of energy to cattle raisers in rural areas, BIRU’s program has contributed to efforts in enhancing national endurance and self-sufficiency. In relation to environmental issues, BIRU’s program has pushed the realization of the national commitment of lowering the amount of carbon emission up to 26% in the year 2020.

Biogas provides fuel for cooking and lighting, especially for people in rural areas. “By using biogas, families would be able to save the time to cook and the time spent to collect firewood up to two hours per day,” said Robert de Groot, Program Manager of Indonesia Domestic Biogas Programme.

Ever since its first implementation in May 2009, BIRU has built over 4,700 units of home biogas reactors in eight provinces in Indonesia. Working together with 40 local organizations as construction partners, BIRU aims at having constructed 8,000 units of biogas reactors by December 2012.