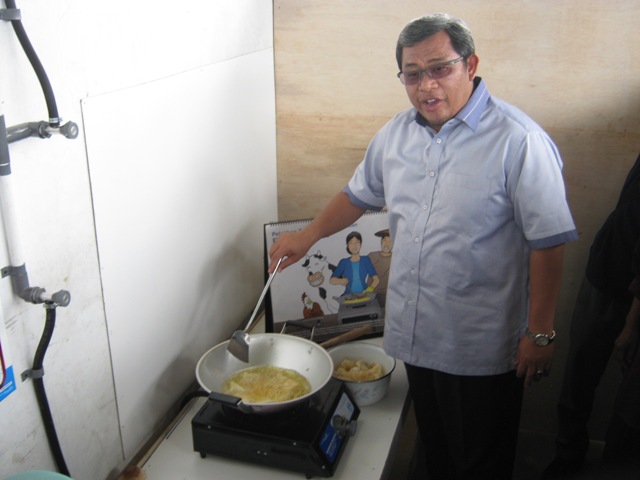 There was something different in Kampung Areng at the end of last year. Not only did the villagers celebrate the arrival of New Year, they also welcomed the Governor of West Java, Ahmad Heryawan, and his entourage from the Energy and Mine Resources Agency, the Regional Environment Management Agency, the Animal Husbandry Agency, the assemblu of sub-district heads, and the media.

From September 2011 through December 2011, this kampong became the destination of so many official visits, such as by West Java’s and Central Sulawesi’s department of animal husbandry, Indonesian Institute of Sciences (LIPI), participants of Biogas International Workshop, the West Java branch of state-owned television station TVRI, as well as breeders from other villages.

What is it that makes this hamlet, located in Cibodas Village, Lembang Sub-district, West java, so special that it has attracted hordes of people?

In addition to its fertile soil and the friendly villagers, Kampung Areng, whose inhabitants mainly work as dairy cattle and vegetable farmers, has come to be known as an “energy village.” Slowly but surely, success stories regarding the use of biogas in Kampung Areng have attracted outside parties to come and conduct researches.

Many of its households have installed fixdome biogas reactors for cooking. Some have also installed biogas lamps to light up their cow stalls at night. The most interesting thing, however, may be the use of bio slurry, a waste product of a biogas reactor, which has proven to be valuable to those who own agricultural lands here.

In Kampung Areng, bio slurry has helped reduce production cost in the agricultural sector — it has been used as a fertilizer component. Previously, the villagers bought most of the mixing components for manure, such as chicken droppings which will be mixed with fresh cow dung, from outside the hamlet. Today they can replace a part of the components with bio slurry.

There are different ways to process bio slurry into fertilizer. Pak Enan, for example, has been using bio slurry as a starter in producing compost. Other components in his formula consist of fresh cow dung, leftover feed, and husks. Enan experimented with bio slurry to fulfill his considerable need for organic fertilizer. Today he has been using the fertilizer in the nursery stage of growing cayenne pepper, celery, cauliflower, mustard greens, and other vegetables.

“Before there were biogas reactors, turning cow dung into compost normally took about two months before it could be used to fertilize the kitchen gardens. It turned out that bio slurry can speed up the composting process,” Enan said. “Production cost can be reduced, and crops have been very satisfactory. Lately I have been processing bio slurry almost every day to prepare for the next planting season.”

Other farmers in Kampung Areng have followed suit. Ibu Eti has been using bio slurry as a component for compost in a different way: She mixes the bio slurry with earthworms (Lumbricus sp.).

She came up with this kind of mixture from experience. She found thousands of earthworms in a stack of cow dung near a cattle stall. Eti then experiemented by mixing bio slurry with the worms. The result was fertilizer of better quality.

“Bio slurry and earthworms make for a good combination. The worms help speed up the drying process of bio slurry. Earthworms usually crowd in the wet part to dry it up, and then move on to another wet side. You can collect the dried up part, no worm there. This kind of composting is so easy. The grains of the fertilizer become smoother and of better quality,” Eti said.

She used the output from her first experiment of combining bio slurry with earthworms in her garden of a local variety of cayenne pepper. Previously, at three-month-old, her chili plants were in grave condition. Stunted growth and leaves that withered and shed so easily signaled that she might not reap what she had sowed. But Eti did not give up. She applied the bio slurry-earthworms fertilizer to each plant. A month later, her plants showed positive signs. The branches multiplied, each bearing many chilies.

Eti has always made use of the same compost ever since. She applies the same fertilizer on the leek garden around her house. These plants, which she cultivated in polybags, have grown very well. This has helped convince people in her neighborhood that bio slurry makes for a good fertilizer component.

Seeing its potentials, not only is Kampung Areng an ideal area for agriculture, it can also be developed into an education-based agrotourism destination. The people of Kampung Areng should be proud; the presence of household biogas reactors has not only helped them in the agricultural sector, but it has also helped others in West Java, other Indonesian provinces, and even the world, to learn about how it is done.