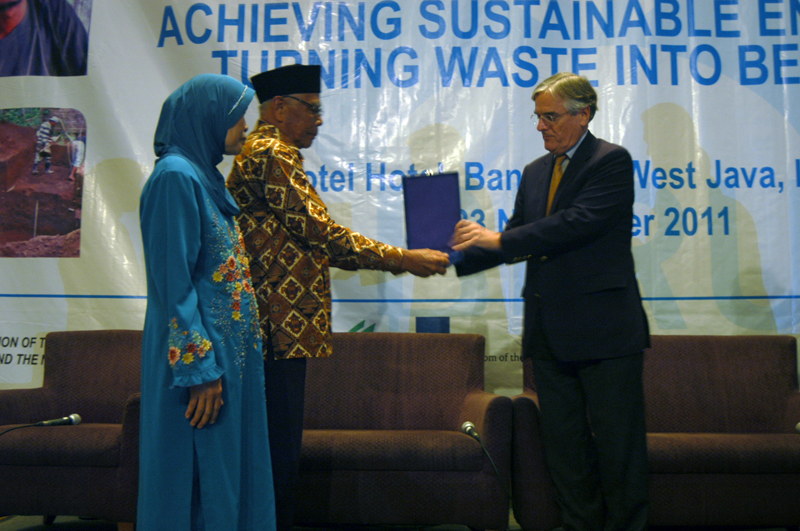 The BIRU (Biogas Rumah) Programme, implemented by Hivos and SNV Netherlands Development Organisation in cooperation with the Ministry of Energy and Mineral Resources (MEMR) of the Republic of Indonesia, has celebrated the construction of its 4,000th biogas digester.

Held in Bandung (West Java) today, the celebration also marked the achievement of 50% of the target of the programme, which started in May 2009 and aims to build minimum of 8,000 domestic biogas plants in at least six Indonesian provinces by the end of 2012.

Speaking at the event, Dutch Ambassador Tjeerd de Zwaan said that the success of BIRU Programme had shown that capacity building was crucial for developing a sustainable new renewable energy sector.

Ministry of Energy and Mineral Resources representative Kardaya Warnika said climate change was a key focus of the Government of Indonesia. “It is hoped that this kind of initiative like [the] BIRU Programme, can bring about [reduced] greenhouse gas emissions and provide people access to affordable energy by utilising local resources,” Mr. Kardaya Warnika said.

BIRU Programme Manager Robert de Groot said that the succes of the programme showed the potential for further development in the biogas sector. “The multi-actor initiative between BIRU and SNV, the governments, construction partners, cooperatives and financial institutions which provide credit has managed to provide biogas for more than 4,000 farmers within two and a half years,” he said.

At today’s ceremony, appreciation awards were given to the owner of the 4,000th biogas digester, the best BIRU construction partner, the most innovative partner and the most productive mason. As per 18 November 2011, 4,177 biogas units have been constructed, with each household receiving a subsidy of 2 million rupiah (€165). The BIRU Programme has 39 construction partner organisations and has trained 475 masons and 102 supervisors who ensure that the quality of the construction is in line with BIRU standards.