Even without electricity, a laptop would do! 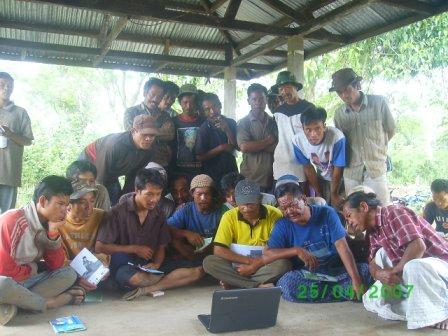 program between Indonesia and the Netherlands as implemented by Hivos through their partnership with local institutions.

It was Sunday morning, 5th February 2011. A clustered group of men were seen in the middle of the plantation area: some formed a semi-circle and sat themselves in front of a laptop, while the rest squatted behind them. It turns out they’re watching an animation about how animal dung is processed into a form of gas for domestic uses as filmed by BIRU – domestic biogas; a joint international collaboration program between Indonesia and the Netherlands as implemented by Hivos through their partnership with local institutions.

“It’s alright Miss, we’ll just watch it on the laptop together… You don’t need to put up the screen,” cried the men. Even with the lack of electrical facilities and optimum electronic devices, the BIRU film continued on playing.

Without a doubt, the audio visual becomes an effective medium in delivering the message across. After all the participants have been lectured to, they then have a much more thorough understanding, especially about the process of biogas formation after having watched the BIRU film; the shape of BIRU reactors and how they function instilled into their memory.

This time, BIRU staff from a local partner – Manikaya Kauci Foundation – provided an in-depth, thorough socialization about BIRU, especially about its subsidies and constructional mechanisms to members of the Kelaan Livestock Group of Bonyoh Village, Kintamani sub-district. Bangli. This socialization was carried out upon the request of Bonyoh Village Chief, one of the head of villages who was present at the previous socialization at the Kintamani District Office which was attended by 30 Village Chiefs among 48 villages in the sub-district.

After the film finished playing, various questions and comments were expressed; including admiration of the hydraulic process which takes places inside the BIRU’s digester where the fermentation of animal dung transpires. Someone even expressed their direct interest in wanting to own a BIRU reactor.

“I’m still waiting for the Micro Business Loans (KUR) which I’ve proposed to BRI,” said Mr. Puspa, a potential farmer in the village who expressed his wish to owning BIRU gas. Cost, it seems, is a major constraint to him.

Bonyoh Perbekel, Mr. I Nengah Buda, assisted in convincing the community of the BIRU Program’s benefits. Perbekel is a term for Head of Village in Bali. Even though he’s managed to capture his community’s interest, he admits the cost to investing in a BIRU reactor is still a major constraint.

Nevertheless, he tries to reassure the community that what they invested in will not go to waste for the next 15 to 25 years to come.

“I’ll take you to the neighboring village that already has a BIRU reactor installed, should anyone need real proof of this BIRU gas, and I’m also ready in becoming a mediator if anyone wants to enlist themselves in obtaining the BIRU reactor,” he firmly expressed.

Until February 2011, the BIRU program in Bali along with their partners have built 37 BIRU reactor units, the program proclaimed a target of 8.000 BIRU reactors to be constructed by the end of 2012.