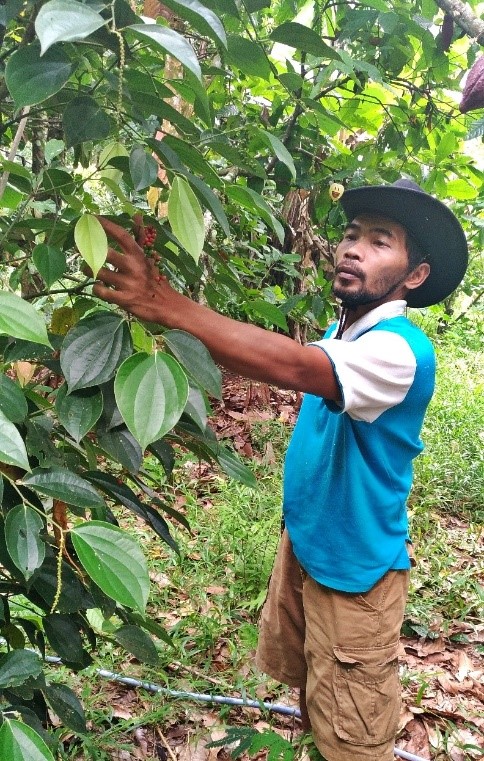 Mr. A. Akbar Agung is one of Domestic Biogas (BIRU) users living in Banyorang Village, Bantaeng District, South Sulawesi Province. After applying biogas technology in his home, he is delighted that he has paid attention to the organic farming and biogas has provided numerous benefits especially in agriculture through the utilization of bio-slurry of biogas sludge.

In his daily life, he is a farmer with a hobby or interest in rearing fish in his house yard. Today with the introduction of bio-slurry, he tries to apply the bio-slurry as organic fertilizer in his pepper crop in his plantation which somewhat is less productive.

Prior to actively applying bio-slurry, he uses a compost which is a mixture between cow dung and earth. The mixture is left for 2 weeks in order to for the soil to be more friable. In addition to compost, he also prepared fermented liquid organic fertilizer by mixing the urine of the livestock and various fruits, stems, and foliage which will then form a Local Microorganism. This liquid fertilizer is directly sprayed over the ground and the plants.

However, the preparation process of liquid fertilizer is considered impractical as it takes quite sometime before the liquid is ready for application.

After using the biogas, he subsequently performed a test on liquid bio-slurry by pouring it all over and spraying it on his pepper crops in his grove.

He feels that bio-slurry application is more practical as it is easily transported to his grove. He can even fill the empty mineral water bottle with liquid bio-slurry. In addition, he doesn’t have to wait for a long time the way it was with the preparation method of other type of fertilizer.

After treating his crops with bio-slurry for some time, he began to witness that the pepper grains grow more quickly. He has been convinced that indeed bio-slurry is capable to boost productivity level of the crop estate or agriculture. He then shared his knowledge and experience using bio-slurry to other biogas users.

Mr. A. Akbar Agung goes beyond using bio-slurry beyond his pepper crop, he also applied bio-slurry on his clove trees growing in his 5 x 3 meter backyard.

In addition to applying the sludge to the crops, he also applies bio-slurry as pond fertilizer on his freshwater aquaculture business where he rears catfish and nile tilapia.

He described, “The large volume of the fruit is actually easy to explain. This is because the crop is able to “consume” more nutrition from the soil. It means, this bio-slurry mixture contains higher nutrients than chemical fertilizer. Experts in agriculture perhaps know more about the chemical content of the bio-slurry. I am certainly not as knowledgeable as they are. However, through the experience the results and benefits are evident, thus we shall not question it anymore.”

Through various creativities in his farming activities, he has also been appointed as the Head of Mujahir Farmers’ Group, where he shares his knowledge to other members following the participation on various traininig. The experience in observing the surrounding environment is deeply instilled in his daily life as a farmer. This is demonstrated with the level of his observation details on the difference in usring chemical fertilizer and organic fertilizer.

His life as a farmer enable him to experiment or perform a test using bio-slurry. His conviction on zeo risk of organic substances has in fact strengthened his desire to continue using bio-slurry and his success has rewarded him with a certain satisfaction. What is equally important, other farmers have gradually adopted his practices and gained knowledge from Mr. A. Akbar Agung. (Rosmiati Lantara)