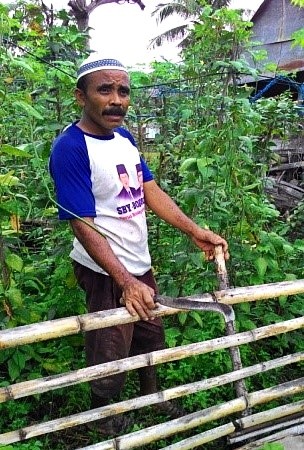 In one occasion, he was invited by the Head of Bonto Cinde Village to participate in a field tour to Benteng Gajah Village, Maros District, to witness the waste processing or biogas sludge (bio-slurry) production into organic fertilizer as demonstrated by KSU Bulu Saukang.  He was finally convinced and invited his family member to submit a proposal to receive a biogas reactor assistance to the local government through Office of Trade, Industry, Mining, and Energy of Bantaeng District.

After receiving the biogas reactor assistance, he ultimately reaps the benefit of the biogas and bio-slurry used as organic fertilizer in his own yard cultivated with Chinese long bean.  He said that he normally applies inorganic fertilizer both in its solid and liquid forms, which also serves as the insecticide and to deal with podborers.

However, after applying bio-slurry, he sees that the production level improves while there are no more podborers on his Chinese long bean.  He also added that bio-slurry fertilizers help to accelerate the growth of the crop and the bean looks very healthy, while it tends to have a longer shelf life.

At one time, he did not even want to harvest the vegetables as he was overwhelmed with happiness to see the lush vegetation and the long bean.  He can now save some money in processing his farm land, both the wetland (rice paddy field) as well as the farmland as he can now significantly reduce the use of chemical fertilizers.