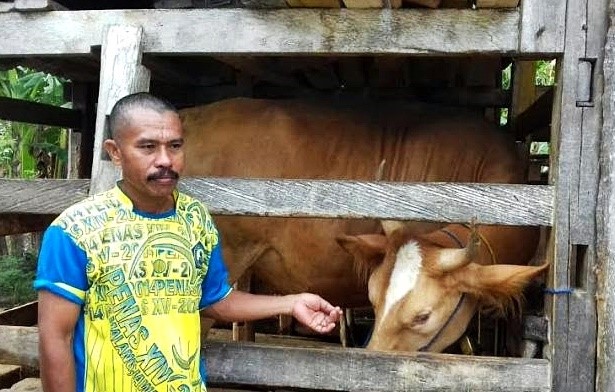 Raising cattle has been Mr. Amir Badawi’s choice after residing in his wife’s hometown. As normal practices among the Buginese Makassar, he has been exploring various provinces throughout Indonesia and even to Malaysia since a young age. His experience abroad has led him to establish Waji Ternak Farmers’ Group. In 2011, this group won a trophy in farm animal contest in Bone District, South Sulawesi Province, thus enable other cattle farmers from other regions to visit and learn from them.

Even though he has been able to gain the knowledge on breeding farm animals, one thing that still troubles Mr. Amir Badawi is the issue of large amount of cow manures produced on daily basis. These cow manures ultimately become a nuisance as the odor that they emit while also inviting flies from the surrounding environment.

He subsequently found out that these cow manures can be utilized and processed using biogas technology to produce the fuel for cooking purposes, lighting, and utilization of the sludge (bio-slurry) as the organic fertilizer. However, information about malfunctioning biogas information and short age of the installation has made him hesitant to invest in building biogas reactor initially.

The warranty on the installment quality by Domestic Biogas (BIRU) Program has eliminated his lack of confidence with regard to the malfunctioning biogas reactor. Additionally BIRU Program also organizes a biogas reactor construction training to produce a local level mason.

This training allows the reduction of construction cost of biogas reactor by training the 6 members of Waji Ternak Farmers’ Group to build the biogas reactor independently.

In 2013, Waji Ternak Farmers’ Group, won a third prize in a national competition for a beef cattle category after fetching the title of the best cattle farmers’ group at the provincial level on the preceding year.

Mr. Amir Badawi’s steps go beyond the profitability of its beef cattle agribusiness, and expand his business to liquid organic fertilizer and compost business.

An individual cow is able to produce 13 liters of liquid organic fertilizer and 3 kilograms of compost fertilizer (without additional organic matters) through biogas fermentation process. The biogas reactor is fed with a ratio of 1:1 between a water or cow urines and cow manures. Subsequently, this ratio will produce a Liquid Organic Fertilizer and compost in large amount of daily basis.

This is a major potential to add additional revenue for cattle farmers provided that it is properly managed considering the price of Liquid Organic Fertilizer which is at Rp 40,000 per liter, while the market price of a compost is Rp 1,500 for each kilogram. This major potential has led him to invest further by submitting an application for commercial permit. After a field test, the permit was finally issued in 2016.

As of today, the Liquid Organic Fertilizer produced by Waji Ternak Farmers’ Group has been able to be distributed to various regions in Sulawesi, such as South Sulawesi, Southeast Sulawesi, West Sulawesi, and up to Central Sulawesi. These fertilizers have also been applied to various crops such as rice paddy, cocoa, horticultures, corns, and so forth.

Mr. Amir Badawi is a role model that BIRU Program is introduced not only to utilize renewable energy at the household level, but also has encouraged the emergence of biogas-based local entrepreneurs. This strategy is able not only expand the job opportunities, but also reduce urbanization. If local potentials can be exploited further, there will be no more needs to earn livelihood aboard. (Aqdar)