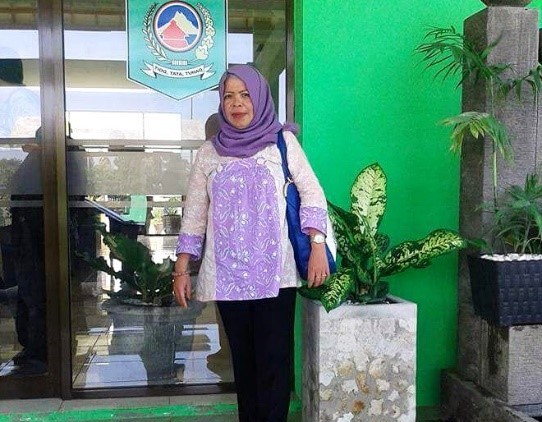 The journey in building the business in biogas sector brings its own story, just like the story of Mrs. Agustina, founder of CV Resky Utama Masagena, one of the construction partner of Domestic Biogas (BIRU) from Pinrang District, South Sulawesi.

Upon the demise of her husband back in 2011, Mrs. Agustina fought her way to raise both of her children who were still in secondary school and primary school.  To support her family, she ran catering and snack business during her stay in Makassar together with her older sibling.  She not only ran both businesses, but she also started to join the membership of a multi level marketing business.  In conjunction with managing her businesses, she routinely traveled back and forth between Pinrang and Makassar.

Until finally in 2013, she formed farmers and animal farming group as well as assuming the position of the head of the group named Masagena Group.  The group which is located at Langa Village, Pinrang District has 28 active members.  The motivation to form the group was her desire to own a business in agricultural and animal farming sectors.  Supported by her family, she finally was able to complete and submit a proposal for goat farming.  The proposal was ultimately approved by local government, specifically Office of Animal Husbandry of South Sulawesi Province.

In 2015, she received an information about Hivos and BIRU Program from her family which explained that the program invited a collaboration with local community to build biogas reactor which is capable or replacing LPG as fuels for cooking purposes and the requirement is ownership of cattle.

Based on the information, she was attracted to once again prepare a proposal to the government with regard of cattle assistance for her group.  Ultimately, the proposal was about cattle farming, without any reference made to a biogas.

However, her family kept encouraging Mrs. Agustina to find out about Hivos and Rumah Energi and suggested that she joined as a business partner in Pinrang District.  Meanwhile, on the other side, her only expectation was to receive the assistance in the form of farming animals where she can raise the animals to develop the business further.  She said that at the time she did not quite understand about biogas thus it did not cross her mind to even join as the business partner.

At the end of 2015, she finally attempted to establish communication with Rumah Energi team in South Sulawesi to learn more about BIRU Program.  Unfortunately, the expectation to meet and had a discussion with Rumah Energi Coordinator for South Sulawesi were unsuccessful due to conflicting schedules.  Finally, she was directed to the Office of Energy and Mineral Resources of South Sulawesi Province where she received explanations and information with regard to BIRU Program from Mr. Munir, one of the official which happened to handle the collaboration program between BIRU and provincial government.

Mr. Munir then recommended her that the farmers and animal farming group which she managed to join as BIRU partner should she is interested.  She once again tried to meet with Rumah Energi team of South Sulawesi by visiting the office.  Unfortunately, her effort was unsuccessful. She was still wishing that there was a animal farm assistance program from the government where she can manage through her group.  The explanation about biogas that she received from Mr. Munir had not made her understand about biogas, as she has not directly witnessed the form of biogas installation.

In order to test the capacity of Masagena Group, this group was then asked by the Office of the Energy and Mineral Resources of South Sulawesi Province to draft a proposal on the construction of BIRU in collaboration with Rumah Energi.  Subsequently socialization activities were conducted for the community at Langa Village.  Candidates of potential biogas users were previously selected by Kelompok Masagena based on a number of qualifications, namely people with cattle ownership, those with sufficient lands, and those who were capable of contributing to biogas construction as the nature of these endeavors are not free government assistance the way it normally is.  Socialization took place successfully and majority of the people were finally interested to acquire biogas reactors.

The Office of the Energy and Mineral Resources of South Sulawesi Province then facilitated the training delivered for biogas construction workers for Pinrang District coordinated by Mrs. Agustina under the guidance of Rumah Energi team.  Only 2 masons out of 6 trainees passed during the initial selection training.  Mrs. Agustina was actually was still confused during this phase as her mind was still lingering over cattle assistance program.  The presence of masons, construction materials, and biogas installation facilities compounded her confusion.  Nonetheless, Mrs. Agustina decided to follow each phase of the activities while she was learning about this biogas program.

She was ultimately offered to be a construction partner of BIRU for Pinrang District.  On the third day of mason training program, the coordinator of Rumah Energi for South Sulawesi Province together with the staff of Office of the Energy and Mineral Resources of South Sulawesi Province conducted interviews with Mrs. Agustina with the topics around partnership, rights and obligations of partner, responsibilities and so forth, as well as illustration on potential income as partner of biogas business.  Beyond expectation, Mrs. Agustina accepted the offer to be a partner and was ready to fulfill all the requirements.  Her primary motivation was not income oriented, but rather on how to lead her group to develop with other businesses.  Biogas business is something new for her and she wishes to prove that she was able to deal with all the challenges.

Rumah Energi team of South Sulawesi Province then directed her to establish collaboration with the nearest BIRU construction partner in Parepare which is KSU Faeza Jaya Bersama.  Starting from this point, Mrs. Agustina started to explore biogas business and started to gain understanding the potential of generating income as BIRU construction partner.

While she was learning about BIRU, she also began to lobby the district- and provincial-level government and joint socialization with Rumah Energi team of South Sulawesi Province.  It is not until she made a visit to other potential areas in Pinrang District and coordinated and established collaboration with Field Extension Agent to identify candidate biogas users in a more extensive manner. 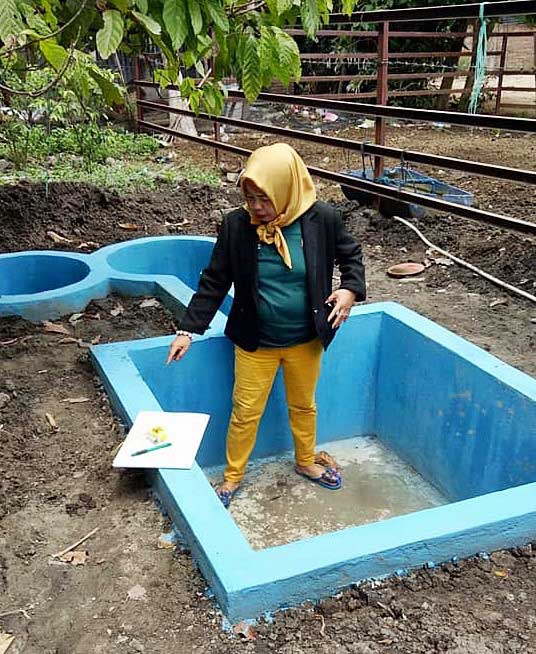 Mrs. Agustina is inspecting the construction of biogas reactor

During 2017, she managed to complete the construction of 148 units of biogas reactors, while there are 2 pending projects due to some factors, that is slow funding realization from the government, issues with the number of masons available in comparison to the number of biogas reactors to be built as well as other situation in the field such as unfavorable climate conditions (rainy season).

The story of Mrs. Agustina has been one of interesting stories about the partners which have been demonstrating their dedications and establishing collaboration to jointly participate in development of biogas sector primarily in South Sulawesi.  Her persistence characteristics, strong will to embark in an enterprise, resourcefulness, and openess to open up new horizon has brought her success in building her own business and distribute the benefits to numerous people. (Sitti Fharidha Razak)