A Sustainable Solution for a Growing Problem

Rawa Pening is a lake located in the Ambarawa Basin in Central Java which is suffering from an oversupply of the introduced species eceng gondok (water hyacinth). We piled into the car first thing in the morning and made our way to the lake south of Semarang on a sunny day. We knew we were close to the lake when every possible space we could see was occupied with the pesky eceng gondok laid out to dry waiting for its transition to become either a pair of shoes, a bag or perhaps made into a souvenir. Once we got out the car and walked down to the lake, I soon realised why the lake was rated as number 9 out of 78 things to do in Semarang by Trip Advisor, the colours on the lake were breathtaking. In the distance we could see dark clouds hovering around the hills, in stark contrast to the local fishermen paddling slowly in the forefront in their delightfully coloured boats. However, it was not just the scenery that has brought us here today, we came to see firsthand the problematic eceng gondok that is threatening the very existence of this lake and all the life that depends on it. 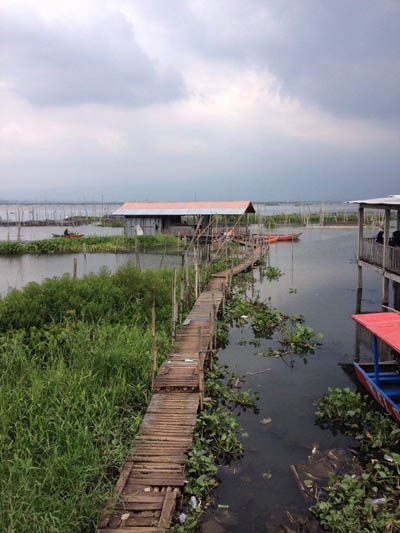 The water hyacinth has become on the world’s most invasive aquatic weeds. It has a rapid growth rate and is extremely adaptable to invade native vegetation. The lush green plant with a beautiful flower, forms a dense mat which causes blockages and interferes with the oxygen, sunlight and nutrient ecology of a water body. The thick mats are clearly gathering in the Rawa Pening and creating islands which are obstructing boats and fishermen. According to a researcher from Diponegoro University in Semarang, Rawa Pening could become dry by 2021. This is a distressing thought when so many rely on the lake for irrigation, flood control, a source of power and for fishing.

This is where BIRU come into the picture. They have realised the potential to use this weed for biogas production and provide an organic, effective, ongoing management process for the invasive water hyacinth. This is a sustainable solution when you consider that that vast number of current weed management strategies include time consuming physical removal or harsh chemicals which come with financial and environmental costs and challenges.

I was lucky enough to visit the lake with Florianus (Flo) originates from Jakarta however he is completing his Bachelor of Science degree in Renewable Energy in Germany. Flo has received funding to build two biogas digesters near the lake, he contacted BIRU and has chosen to use Biogas Rumah (BIRU)’s fixed dome design and contractors for the construction. Flo has finished his research on using eceng gondok to feed the digesters, and is now at the stage of putting his research into practice. We visited the proposed sites for the new 8m3 and 10m3 digesters that were to be built in the following week. The families were both excited for their future supply of biogas which will mean no longer needing to purchase LPG gas.

Flo kindly shared his data which included an image showing the area of lake Rawa Pening and how much the lake has shrunk from 2010 to 2015, as seen in diagram 1. The shrinkage has been substantial in some areas, where before it was underwater, sawah (rice paddies) now grows and a few houses have been built. As of June 2015, 42% of the lake was covered with eceng gondok (diagram 2), this can only have increased since seeing as the water hyacinth can double its size in five days. Flo explains that for a healthy lake, only 20% of eceng gondok should be growing around the edges of the lake in order to support the shore. This means the remaining weed can be utilised for biogas production. Based on the current amount of water hyacinth in the lake, this translates into enough fuel to sustain 2000 digesters. The potential energy production would mean 1003 less tons of carbon per year, save the lake from disappearing and provide residents living in the area with a nutrient rich, organic slurry to enhance their agriculture and business. This is another example of an exciting, sustainable solution that BIRU can help achieve. 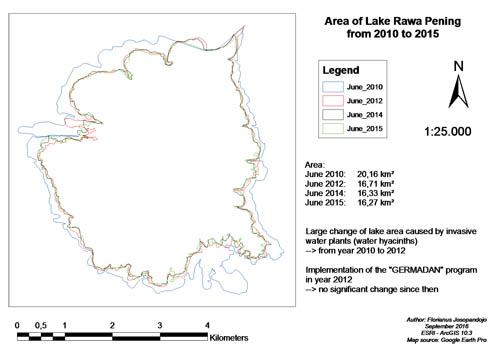 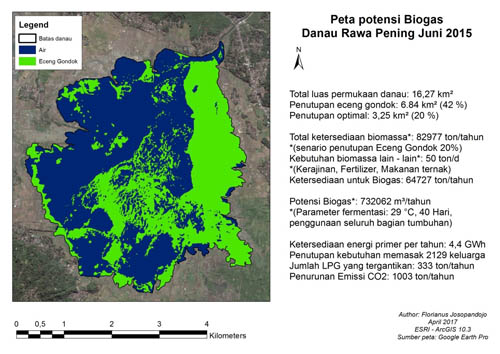 Diagram 2, shows the potential for biogas usage from eceng gondok as of June 2015

Although the Indonesian Government has recognised the need to control eceng gondok, and once a year provides money to manage the weed, this process is expensive and proving not very effective. BIRU and Flo are one more realistic step ahead in thinking that a more sustainable solution would be to invest that money into building digesters. This would give residents motivation to utilise the eceng gondok. Every day the weed could be gathered to feed the residents digesters and provide them with clean energy and organic fertiliser.

After speaking with Flo and hearing his research I no longer felt forlorn about the future of the lake. Instead of seeing a pesky-lake-sucking-weed I could see it as a source of carbon neutral energy. I for one, cannot wait for Flo’s research to be completed, hopefully then more people can also see the potential and more digesters can be built to help save Lake Rawa Pening from disappearing. (Louise Waddell)