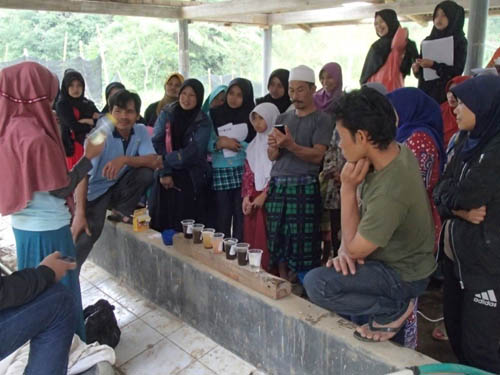 Kelompok is a pilot project of Rumah Energi’s GADING program in West Java, which aims to provide a training centre where biogas users can learn about using and taking advantage of their bio-slurry. The training covers all things bio-slurry, such as how to use it to grow duckweed, to produce good quality fertilizer through feeding it to earthworms, how to obtain an organic certification for the fertilizer, and business skills on how to then sell the final product. Kelompok has been operating for one year and has so far been successful.

Kelompok’s learning centre is based in Cikajang, Garut regency, in the yard of Pak Itang’s house. Amongst cows, duckweed ponds and earthworm greenhouses is a little shed, to which people from as far as Jakarta come to learn about bio-slurry and all its applications. GADING program has held many training sessions at Pak Itang’s house, to a wide audience of farmers, biogas users and school groups. Pak Itang also regularly travels around Garut in order provide training to a greater number of people. I went along to one such training session in a small village near Cikajang, where Pak Itang and other Gading representatives provided teaching to a room of mostly women on how they can turn their excess bio-slurry into cash. 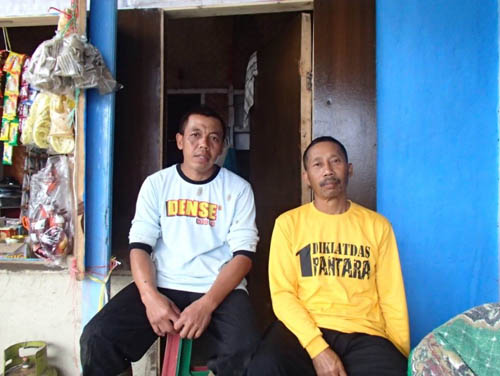 Since its inception, biogas users are feeling the benefits of the training and support provided by GADING program through Kelompok. It is because of the training offered under this program that Pak Erweh and a small community group of biogas users from Lembang (a city just north of Bandung) have been able to make a business proposal in order to obtain grants from the GADING program. Pak Erweh and 5 other farmers from his village are excited at a chance to implement the knowledge that they have learnt at various Kelompok training programs. He himself has already received 4 different trainings from GADING under the Kelompok program: bio-slurry management training, training on how to use bio-slurry to grow duckweed, green fodder training (for feeding cows) and gender training. Together, all the farmers in this group except for one have completed the same trainings. Trainings have previously been held in this village, and generally groups of around 20 farmers and biogas users attend each one. Thanks to the trainings, the village now cultivates duckweed and fertilizer from earthworms, making extra money for households.

Pak Erweh and his group of farmers all have biogas reactors, and though they use some of their bio-slurry for farming, they have surplus left over. As such, that they wish to use this slurry productively in order to cultivate fertilizer from earthworms, so that what is currently leftover waste can be turned into profit. To achieve this, they have formed a group and formally approached GADING program to apply for a grant. This grant is not a financial grant, but instead Rumah Energi provides materials in order to build infrastructure, in this instance for greenhouses to hold earthworms. The community group will also receive further training from GADING program on a more efficient method of producing fertilizer from earthworms using bio-slurry. 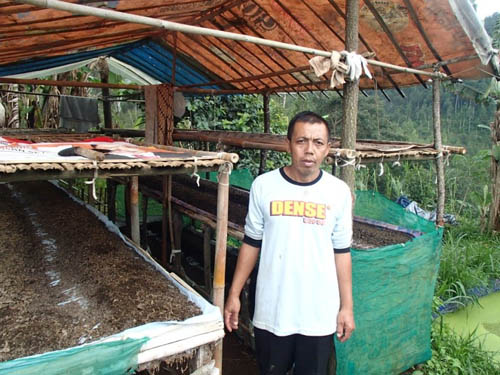 Pak Aep in front of his earthworm shed and duckweed pond

Utilizing unused slurry is a goal of the GADING program. Currently, 80% of biogas users use their bio-slurry, but only 4% sell it. Leftover slurry which is tossed into vegetation or flows into a river causes contamination to the environment, and by promoting the use of all bio-slurry that comes from a digester, Rumah Energi can help to mitigate this wastage. This community group is just one example of the success of the Kelompok program. All over West Java, groups of biogas users from villages are undertaking business partnerships with GADING program, receiving support to implement the knowledge that they have learnt. (James Lawther)