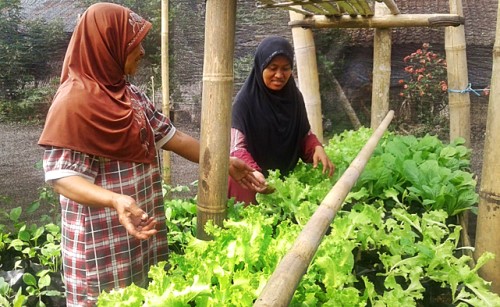 Pagerjuang Hamlet, a cool and hilly hamlet, on the slope of Mount Merapi, Yogyakarta, in which majority of the inhabitants are dairy farmers.  Ibu Sayemi, 35 years old, is one of a local dairy farmer mentored by GADING Programme since September 2016 who also runs a promising laying duck farming.

“Throughout these times I have started to pursue this business (laying duck farming) even though it is still on a limited number. Trainings organised by GADING Programme have provided me with knowledge that bio-slurry may be utilised for more than just fertiliser, but may also be combined as alternative feed composition (duckweed) both for poultry farming as well as large animal farming,” Bu Sayemi revealed. Bu Sayemi grows duckweed in a 15-m2 pond in her backyard.  The pond construction was financed by GADING Programme and it has now been the primary source of the supplementary feed for her various farming animals.

Initially, her duckweed culture business encountered some hurdles as plenty of the duckweed were eaten by such predators as tadpoles, pond snails, and aphids.  However, intensive training and consulting provided by GADING team for free has enabled Bu Sayemi’s pond populated by ready to harvest duckweed.  Bu Sayemi is able to harvest 2 kg of duckweed on a daily basis, which turned out to be insufficient for the supplementary feed for her two cows and 20 ducks.

This problem is overcome by harvesting duckweed growing wild along the Opak River, Pagerjuang Hamlet, together with other women members of Rumah Organik (the House of Organics).  Today, Bu Sayemi is able to harvest almost 5 kg of duckweed on a daily basis:  4 kg for her cows’ fodder while the remaining harvest were fed to her ducks.

The outcome is outstanding!  The quantity of milk produced by cows fed routinely with duckweed increased by one litre per day, similarly with the increasing milk quality indicated by higher gravity.  Higher gravity means it has a higher fat and protein contents.  This improvement has positively impact on Bu Sayemi’s revenue as her milk price increases from Rp 4,800/litre previously to Rp 5,200/litre.

Other benefits provided by the duckweed is the colour of the yolk of the ducks fed routinely by duckweed.  The yellow colour now is more prominent which indicates that it now has higher protein content.  Her duck egg business run by Bu Sayeni is quite profitable as she is able to generate a daily net profit of Rp 30,000.  She is able to sell her dug egg at Rp 2,000 per piece.  This nominal is quite substantial for Pagerjuang Hamlet standard and the whole profit earned is spent to support Bu Sayemi’s day to day family needs.

Based on the outcome generated through duck weed aquaculture, Bu Sayemi plants to expand the number of her ducks to 300 to bring her dream into reality by running an organic duck egg business and improve the living standard of her family.  She is going to submit a proposal and apply for a business support to GADING Programme.

“This is in alignment with my aspiration to bring organic food down to earth.  I am interested to run this business as there are not many laying duck farmers, as there is only one or two of them them, she said.

According to her, the demand of duck egg in Pagerjuang Hamlet is quite substantial as in addition for the community consumption, it is often used as the supplementary food for the cattle.  The expansion plan will also cover Kepuharjo Hamlet, a neighbouring hamlet, through a word of mouth marketing, as well as taking advantage the social media to establish collaboration with organic market in Sleman which happens to frequently organise organic product exhibition.  The products offered will not only be fresh organic eggs, but also salted processed dug egg thus add the product values.

Other promotional media exploited by Bu Sayemi is the Demonstration Plot of Rumah Organik, a demonstration plot prepared by women participants of GADING Programme which will serve as a media for community learning in managing and utilising bio-slurry.  This demonstration plot is cultivated with various bio-slurry based organic plants.

Expanding the population of the ducks to 300 birds will produce 240 pieces of duck eggs on a daily basis (or 7,200 pieces of eggs per month).  The product will be distributed to the community (30 pieces), grocery shop (30 pieces), herbal shop (60 pieces), and traditional market (120 pieces).  The estimated net earning is six million Rupiah per month.  It is expected that it will generate other creative products derived from these activities emerging from bio-slurry production.

The six million Rupiah figure is obtained from the total estimated sales minus variable costs for feed, transportation, and so forth.  The estimated montly sales’ figure will be 7,200 pieces multiplied by the unit price of Rp 1,700.  Total gross earning will be Rp 12,240,000.

Meanwhile, variable costs will comprise poultry feed for the ducks on monthly basis, transportation costs of the eggs, and so forth which will be a total of Rp 5,500,000.  Therefore net profit earned by Bu Sayemi will be Rp 6,740,000 per month.

Bu Sayemi expects that this business expansion will drive the local economy thus the community will be more empowered socially and economically, and they will be more healthy by consuming organic foods. (PR)