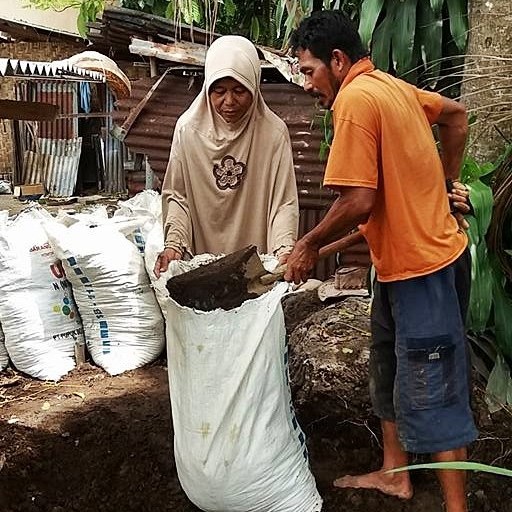 Without the repulsive feeling, Amaq Samat gets down to his own bio-slurry reservoir pit.  His cheerful expression is clearly reflected on his face shortly before starting the activity.  Both of his hands start to unearth the bio-slurry accommodated in the reservoir pit, swinging the shovel up and down vivaciously.  Sweat and splash of bio-slurry start to soak his body.  It took almost half an hour to drain the bio-slurry into a pure solid form.

Amaq continued with his activities.  He washed his hands and limbs splattered with bio-slurry and then walked to the location where he keeps his dry bio-slurry being aerated outside.  The sun dried bio-slurry is now completely dark, cold, and clumpy.  This is an indication that bio-slurry is ready to be used as a fertiliser.  Together with his wife, Inaq, Amaq sift the ready to use bio-slurry and put them into a 5 kg, 10 kg, and 25 kg capacity plastic bags which they have prepared beforehand.  Bio-slurry is now ready to sale as a high quality bio-fertilisers.

It has been almost five months since Amaq and Inaq become bio-slurry entrepreneurs.  Various activities described above are routine activities they have previously never imagined.  The idea started with an invitation from a biogas construction partner staff in West Nusa Tenggara who has previously constructed a bio-digester (biogas reactor) in Amaq’s yard to manage and utilise bio-slurry automatically produced on a daily basis as the sludge of manure fermentation process into a biogas.

As he was interested, Amaq then discussed it with GADING Programme staff which then provided him with the support in the forms of training and working capital as he saw Amaq’s determination and stong motivation.

“To avoid bio-slurry being wasted.  I have tried to fertilise my plants with bio-slurry and the outcome was satisfactory.  I wish to see other people to utilise the product as well,” he said.

Nowadays the business that Amaq has pursued starts to show positive results.  Even though the sale of his bio-slurry is still on a limited amount, people around him have started to discover his business.  Through the support of GADING team on the early promotional phase, Amaq is now routinely taking a four ton order of bio-slurry where it will be supplied to the organic community in Gumitir Bali. Orders also come from an individual that is an Agricultural Extension Agent who was attracted to purchase bio-slurry after witnessing the preparation process and lush vegetation after being treated with bio-slurry fertiliser. 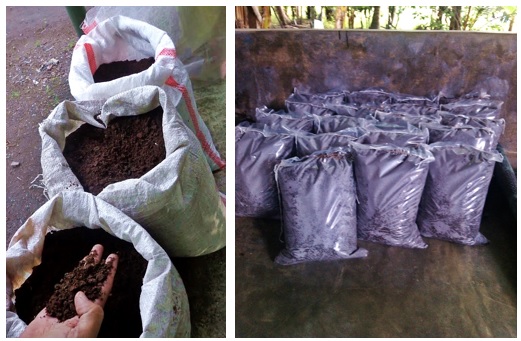 Amaq also invited other biogas users around his home to involve in this business.  At least there are 19 biogas users who are ready to supply the needs of bio-slurry when needed.  Bio-slurry supplied by other users are ready to use dried bio-slurry (pure black, cold, and clumpy) bought by Amaq at a price previously agreed with the suppliers.

“In order for all biogas users here to enjoy the benefit of the bio-slurry here, I invited all biogas owners to be biogas suppliers,” he explained.

Thanks to Amaq’s endeavours, now people using biogas once again fill up the reactor.  While previously people only fill the reactor only once a week or even once a month, now they start to refill the biogas reactor more frequently, even almost on a daily basis.  By refilling the reactor on a regular basis, they manage to obtain greater amount of bio-slurry and on a more sustainable manner.  In addition to the cooking gas supply, bio-slurry has enabled the people to earn additional income.  To keep up their spirits, Amaq routinely visits other biogas reactor users to motivate them to consistently refilling the reactor and properly manage their bio-slurry.

To increase the bio-slurry sale, Amaq established a collaboration with Universitas Mataram in developing a demonstration plot cultivated with various plants.  The fertilisers in use are a mixture of bio-slurry with NPK fertiliser and sodium silicate.

Amaq Samat hopes that the business he has started will continue to expand.  It is expected that this business will be more than just additional stream of income, but also provides benefit to the people in the neighbourhood.  He insists on involving other biogas reactor users to embark on this bio-slurry business and expand the collaborative market with local Field Extension Agent to promote bio-slurry to the local offices such as the Office of Agriculture.

“The surrounding has been very clean ever since, no more stacks of bio-slurry scattered which are aestethically unpleasant, while also allow the owners of biogas reactor to altogether enjoy the benefits of bio-slurry,” he concluded. (PR)