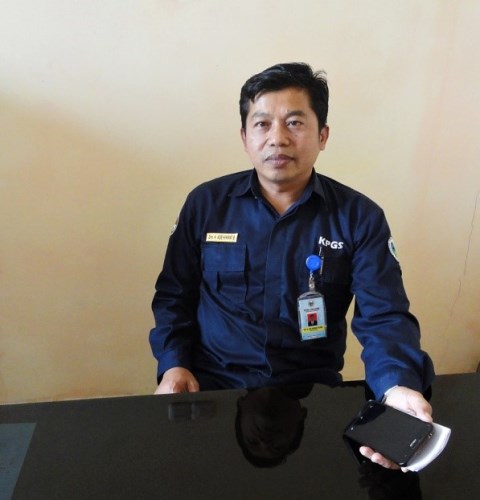 Koperasi Peternak Garut Selatan Cikajang (Cattle Farmer Cooperative of Cikajang, South Garut) is a lending partner organisation of Domestic Biogas (BIRU).  The primary activities of the Cooperative which office is located at Jalan Raya Cibodas, Cikajang Subdistrict, Garut Regency, West Java, is to accommodate fresh milk supplied by cooperative members and then distribute the milk to PT. Indolakto and PT. Ultrajaya on daily basis, while the rest are sold locally.

Drh. H. Ade Hikmat Buana, the General Manager of KPGS Cikajang explained, milk deposited by the cattler farmers were grouped into different price variants for each sub group.  These price differences are due to differences in milk production quality, both total solid, specific gravity, protein percentage and so forth.  “In a single coopertive, there may be as many as 30 price variants, in which the lowest is Rp 4,000 and the highest is Rp 4,600 depending on the milk quality,” he said.

The Cooperative also engages in saving and loan business sector in which the coopertive provides the capital for cattle farmers who desire to have a biogas reactor built using credit facility.  Ade explained, to build a biogas reactor using the credit facility, farmers should first register themselves as members of KPGS and be active production members (have their own dairy cows) and a minimum balance from their income to cover credit installment.

“As long as they produce the milk it is highly unlikely that they cannot repay their liabilities.  Non-performing loans occur when they no longer have the cattles thus the biogas reactor is no longer operational,” Ade said when asked about the possibility of bad credits incurred by cooperative members.  Now there have been around 100 biogas reactors in KPGS operational areas, 5 reactors are being constructed, and 40% of the existing biogas reactors have slurry pit installed.

Prior to Rumah Energi’s programme which is Domestic Biogas (BIRU), people used to discharge cow manures through the gutters which ultimately led to the river and pollute the water.  Now cattle wastes are not immediately discharged to the river, but instead have their gas content extracted first.  “Cattle farmers no longer have to buy firewoods or LPG gas and certainly less manures are discharged to the surrounding environment,” Ade explained when we met following annual KPGS members’ meeting.

Ade also explained about the benefits enjoyed by KPGS through the introduction of BIRU Programme.  Cattle farmers become more passionate in rasing their dair cows.  “BIRU Programme is more than just waste management and conversion into a gas training but also there are additional management training such as how to manage bio-slurry and turn it into manures, insecticides, foliar fertilizer, conversion into pellets for animal farming, fisheries purposes and so forth,” Ade said.

“There are some terms known in dairy farming, that is white gold (milk), green gold (manures), and red gold (meat).  All them are fully utilised,” he continued.

The Cooperative is planning to establish collaboration with other institutions or partners to distribute bio-slurry from the cattle farmers thus they will earn both from the milk and bio-slurry sales to pay their credit installments. (Venessa Damanik)