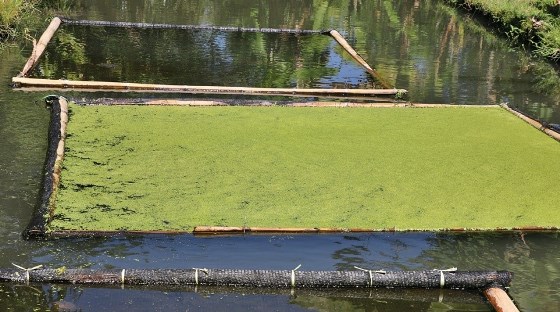 Duckweed or commonly known as Lemna is a plant which is familiar among the community.  The protein content is so high which makes the plant very attractive and can be utilized by various sectors, both as additional food nutrition or fodder, processed into energy, turned into biofilter for water remediation purposes, and even used as a mixture in cosmetic ingredients.

On a cultivation and cattle farming, the utilisation of lemna as added nutrients in fodder is common practice as it provides positive impact on the animal growth and cultured animals.  Similar to what the cattle farmers in Mekar Jaya Village, Cikajang Subdistrict, Garut Regency, West Java.  Thanks to GADING Programme implemented by Rumah Energi in the region, cattle farmers gain more understanding on the benefits of lemna and the benefits of utilising bio-slurry (biogas sludge) for lemna nutrition.

The benefits of utilising bio-slurry for lemna nutrition have been enjoyed by Novi Yulianti, one of the resident at Mekar Jaya Village. The Garut-born woman admitted that the introduction of GADING Programme has been very helpful and she experienced first hand the benefits of adding lemna to her fodder’s ingredients.  Novi adds a pail of liquid bio-slurry produced by her biogas reactor as a nutrition or feed for her lemna ponds.  She said that giving liquid bio-slurry routinely has improved the lemna quality and accelerate the growth rate.  As a dairy farmer, she uses lemna produced by her culture ponds as mixture of her fodder while feeding her dairy cows with lemna routinely has enabled her dairy cows to produce more milk on a daily basis. 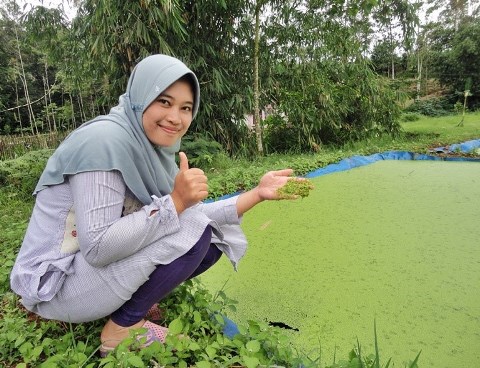 Therefore, higher milk productivity will generate profit for Novi up to Rp 2,214,000 annually.  Additionally, adding lemna on a routine basis to her pregnant cows will enable her cows’ milk productivity, even up to the seventh month of the cow’s pregnancy.

Bapak Adis, a resident of Mekar Jaya Village has also had same experience.  The Head of Pamegatan Cattle Farmer Group has also reaped the benefit after feeding lemna to his dairy cows.  Unlike Novi, milk productivity of Bapak Adis’ cattles has increased up to 2 liters on a daily basis.  He explained that he feeds a single dairy cow between 60-70 kilograms of green fodder and 8 kg of food concentrate.  Adding 10 kg of wet lemna as extra ingredient allows him to reduce the needs of food concentrate down to 2 kg.

In addition for their own consumption, some residents of Mekar Jaya Village, such as Bapak Itang, have started to sell its lemna production.  Before selling the products, Lemna has to be dried for 4-5 days, before being stuffed into a gunny sack.  He admitted there is a unique challenge while engaging in lemna sales activities as it takes around 12 kg of wet lemna to produce a 1 kg dry lemna.  However, Bapak Itang’s effort has been finally paid off with a relatively high price of dry lemna, which is Rp 50,000 per kg.  Demand on lemna is also very high and Bapak Itang admitted that he has not been able to meet all those market demands due to relatively extensive processing process. (Stefanny Trifena)