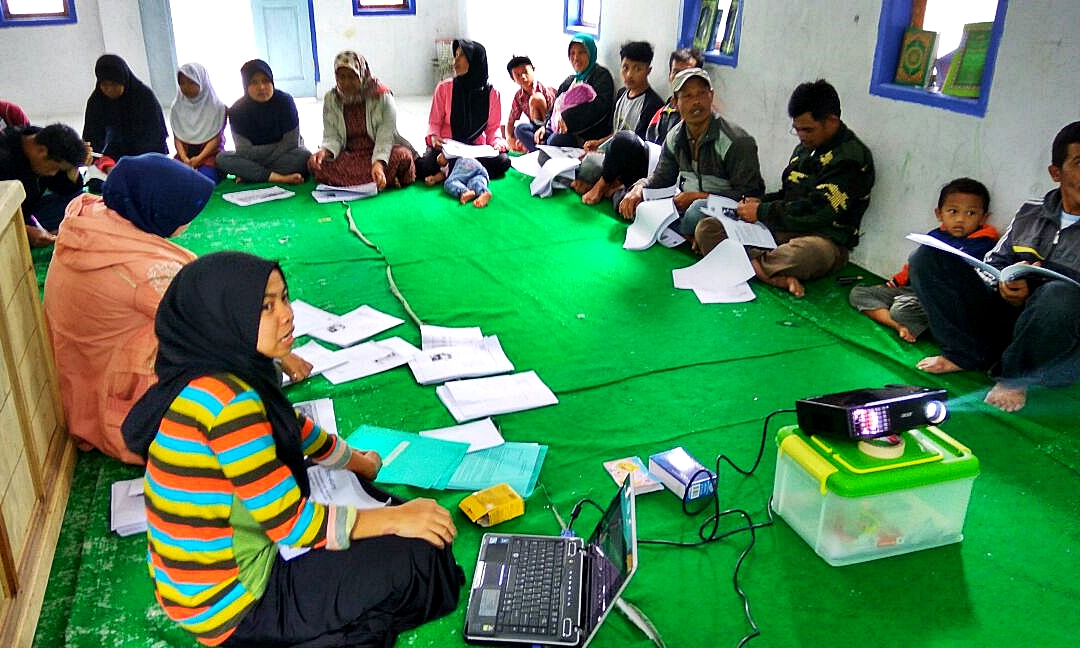 Dede Rinrin is a resident of Mekar Jaya Village, Cikajang Subdistrict, Garut Regency, West Java. She is actively involved in developing bio-slurry (biogas sludge) business. At her very young age of 26 years old, the woman who was born in Garut has started a business of bio-slurry production center. The woman who is fondly referred to as Teteh Dede acknowledged that she became interested to identify business opportunity in bio-slurry following her participation in a training organized by GADING Programme on bio-slurry utilisation. Her motivation to empower the women in her village has been the driving force to create fertiliser production center with bio-slurry as the main component.

“Therefore we develop a production center here which will be managed by every woman or housewife. Wouldn’t it be better to occupy yourself rather than staying idle?” Dede said when she tried to describe her fertiliser business.

On explaining her fertiliser production center, Dede said that she is going to establish a collaboration and sign an agreement with the cattle farmers with existing biogas reactors and slurry pits (biogas sludge container) in Mekar Jaya Village to be the center’s partners for a certain number of years to ensure the material or manures’ stock availability. There are approximately 10 active biogas reactor owners in Mekar Jaya Village. The Center plans to serve as an umbrella for each biogas reactor hoping that biogas users will want to sell their bio-slurry to the fertiliser production center.

The products will be distributed to the farmers or end users or sold to farm supply stores and large distributors which are ready to distribute the products. Once the business is 1-2 month olds, a survey which covers areas beyond Cikajang Subdistrict and within Garut Regency’s region will be carried out. Currently, focus of product marketing will be on solid bio-slurry fertiliser due to the market demand while future plan will include marketing expansion for liquid bio-slurry.

In addition to bio-slurry fertiliser, there is also plan to develop large scale fish rearing business with permanent ponds which at the time the construction process have almost been completed. It is expected that the ponds will produce between 4-5 tons of fish with an approximate profit of Rp 8,000,000 on a monthly basis from the 10 existing ponds. Additionally, lemna cultures will also be carried out in which it will be turned into pellets to support fish feed supply in a more economical manner.

As for vermiculture business development, it has been going on for about five months with Pak Itang as the early adopter. Pak Itang is the resident of Mekar Jaya Village who have planned to develop four corners at his premises for this vermiculture purposes. Hopefully, this vermiculture business will grow rapidly and the efforts to claim the market share will not be too difficult. Once the plan has been well-executed, other centers such as aquaculture, vermicompost, and others wll also be developed.

The motivation to empower women in this bio-slurry business has allowed Dede to participate entepreneurship training I her village, and even to Sumba and East Nusa Tenggara.

“I wish to run this bio-slurry business to empower the housewives here, so we see cattle manures not how they are but rather see them as potential income. Therefore, it will keep them passionate in running the business,” Dede said.

As one of GADING Programme trainer’s local helper, Dede admitted the most challenging task in delivering the training is to convince the people on the huge benefits they could enjoy by building a biogas reactor and manage the waste or sludge in a more appropriate manner. The nearest gender training will be organised on April 2017 and normally it will take place in one of the local resident’s house between 01:00 pm o’clock to 03:00 or 04:00 pm considering that there are plenty of duties these cattle farmers have to perform in the morning. According to Dede, delivering the training materials is relatively easy as these cattle farmers easily understand the topics as they have experienced the practices on daily basis. (Stefanny Trifena).