From the Dairy Cow to Vermin Compost 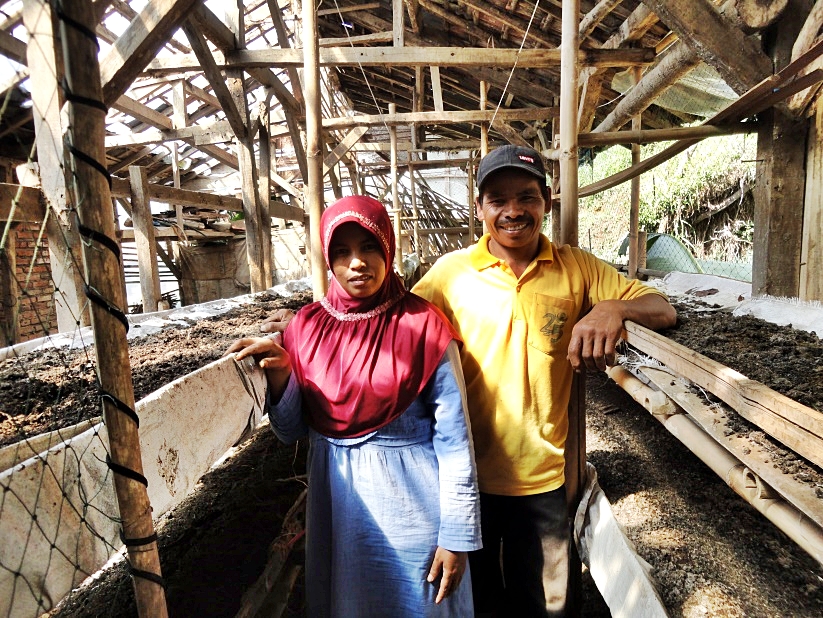 Pak Itang, as he is fondly called, is one of dairy farmers at Mekarjaya Village, Cikajang Subdistrict, Garut Regency, West Java.  The 45 year-old, Garut-born man, lives with his wife, Ida Yuningsih (39 years old) and all of their five children.  To meet their end needs, every morning and on the late afternoon, Pak Itang has to milk her dairy cows and deliver the products to milk collector where it will be then deposited at KPGS (South Garut Cattle Farmers Cooperative).  Pak Itang’s dairy milk product is sold at Rp 4,200 per liter.  The revenue of these dairy sales certainly are not enough to cover all of their family end needs.  Nonetheless, Pak Itang, keeps her passion alive as he carries out his jobs as a dairy farmer.

Now his hard work has finally paid off.  Pak Itang has been one of model cattle farmers which does not only sell dairy milk products, but also is an example of successful vermiculture business and sells vermicompost.  The story began when BIRU Programme, which established collaboration with KPGS to build biogas reactor for cattle farmers, offered a credit scheme.  This biogas reactor relies on cow manures as the raw materials thus allow Pak Itang to put all the manures of his cows to use.  Additionally, methane gas produced through the reactor can now be used to fuel his stoves and this is the reason why Pak Itang decided to construct this 6 m3-capacity biogas reactor.

“Less burden for the kitchen, no more firewoods.  Sometime even my neighbours (younger sibblings) may even cook in my place,” he said when asked the reason why he was willing to build a biogas reactor.

Since he owned the biogas reactor in 2013, Pak Itang’s family no longer need to buy three 3-kg capacity LPG cylinders.  Additionally, Bu Ida (Pak Itang’s wife) now has additional activities in addition to being a housewife, that is supporting her husband in vermiculture business.  Bu Ida is one of the two women who are involved in vermiculture in Mekarjaya Village and she has earned some profit through her earthworm sales and vermicompost.

Vermicompost bedding uses solid bio-slurry (biogas sludge) spread on top of a plywood layered by a gunny sack before putting in the starter earthworms.  Food for the worms is given once every 4-5 days.  Previously, Pak Itang used bio-slurry to feed the worms.  However, following a tryout it turned out that cow manures can be used to feed the worms.  Pak Itang has since decided not to use bio-slurry as a food for the worms.  He converted bio-slurry as fertilisers for sale and use another portion to fertilise his garden.  Cow manures need to be left idle between 3 days to one week to remove the gas content before feeding the manures to the worms.

There is a trick in feeding the worms, too.  First of all, set the bedding of the vermiculture to both edges of the bin thus create an empty space in the middle.  Then put the dried cow manures to the middle.  The worm wil then move to the cow manures in the middle.  The dried bedding (the ones which have been fully consumed by the worms) will then turn into a vermicompost.  This vermicompost is suitable for the plants as it contains complete nutrients, both macrochemical and microchemical elements which are useful for the plants’ growth.  Pak Itang also explained the advantages of vermicompost over chicken manure compost.  “Chicken manure compost needs to be left idle first for 1 week and sometime for 2 weeks before being used in plant cultivation, whereas you can instantly use vermicompost in plant cultivation,” he said.

Worm harvesting is carried out on a monthly basis.  Ready to harvest worms are large worms with white clitellum near the earthworm’s head.  Harvesting method is fairly easy, simply leave the bedding under the sunlight and the earthworms will burrow deeper and form a colony thus the top layer of the bedding may be removed and leave the worms at the botom.  When asked, who normally did the harvesting of the vermicompost, Pak Itang replied smilingly.  “Most of the time is my wife, sometime I helped her out,” he said.

According to Pak Itang, a single earthworm egg may produce 5-6 hatchlings and each 5 kg of breeding worms may produce as much as 20 kg of ready to harvest worms every month.  The worms are sold at Rp 25,000 per kg to public fishing ponds, cosmetic factories, and so forth.  Meanwhile, vermicompost is sold at Rp 20,000 per sack (12.5 kg weight).

Pak Itang and his wife may generate a profit between Rp 200,000 to Rp 500,000 in a month from the sale of vermicompost and earthworm produced by the breeding ground the size of an 8 x 5 meter greenhouse.  Pak Itang and his wife’s success have motivated the neigbours to start vermicompost business and enjoy the economic impact generated by utilising bio-slurry. (Venessa Damanik)