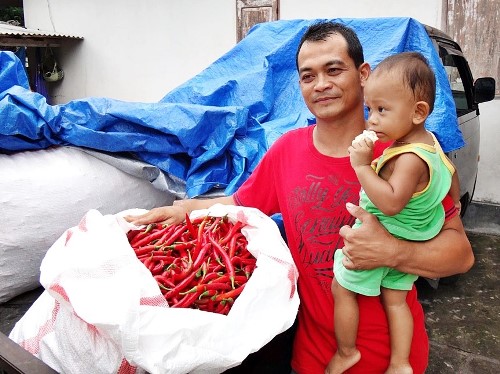 Although I had heard so much about the famous ‘liquid gold’ that is bio slurry, nothing prepared me for seeing first hand the advantages that using bio-slurry can deliver. I was fortunate enough to be sent to the BIRU Malang office in East Java where Pak Wasis, the Provincial Coordinator, and the enthusiastic team at the office there, gave me a whirlwind tour of visiting users, cooperatives, construction partners and the Nestle factory. East Java is kicking goals, they have built well over 8000 digesters since 2009 and the majority of these users are utilising their slurry. During my time there I saw not just only how much money people can save by using their slurry, but also the employment opportunities that using bio-slurry can create. This article is a recap of my time in Malang, I would like to share a few of the stories from users of bio-slurry that we visited.

In the lush green hills of Ngantang we visited Sumber Makmur cooperative where they have already built 1400 digesters since 2009. They have 3200 active members, who are mostly dairy farmers, 1400 already own digesters and the word has spread about the benefits of using the slurry. The benefits of using the slurry are so well known that even those who don’t own digesters are wanting access to the slurry. One example of potential slurry customers is in Purworejo village where the majority of residents are vegetable farmers and don’t have access to animal dung to feed a digester however they have heard of the prosperity that slurry can bring for their produce. This is where Sumber Makmur cooperative come into the picture. They have recognized that it is common for digester owners to not always have the time or tools to collect and use their slurry. Thus, a new market exists for a middle man to collect and distribute the slurry.

Twice a week Sumber Makmur cooperative travel in a small truck capable of holding 2 tonnes of slurry and collect, then distribute, the liquid slurry from 20 users. The cooperative has had to hire an extra team to keep up with collecting and distributing the slurry. They estimate that 1 tonne of liquid slurry has the potential to become 300 kg dry slurry. Prior to farmers having access to this convenient service, they would use dry manure which had to dry for a year before it was ready. Slurry only takes one week to dry and still contains 40-50% of the water content. Farmers are not only saving time with this distributing service, but also money, as the slurry is significantly cheaper than fertiliser according to the users I spoke to. 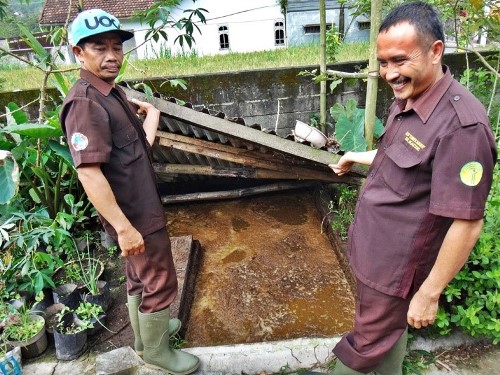 Two employees of the Sumber Makmur cooperative slurry collecting service who say there is always demand for their service, in the photograph is an example of a slurry pit that is ready for collection

Abdul Rokhim is employed by Sumber Makmur cooperative and is part of the slurry collecting team, he is also the proud owner of a digester and told me his motivation for investing in one is that he wants no part of a cow to go to waste. He built his 8 m3 digester in 2013, owns five cows and the biogas supplies two houses with a total of seven people benefiting from the carbon neutral energy. Mr. Rokhim grows rice and red onions and excitedly tells me since using the bio-slurry instead of fertiliser he has increased production by 20%, reduced his use of fertiliser by 50%, has noticed less attacks from insects and the overall quality and quantity of the onions is visibly notable. This positive story was to set the theme for the remaining users of slurry I met in Malang.

Pak Agus built a 6 m3 digester in 2012, he wishes he had built a bigger one as he has to buy extra slurry to be enough to use on his chillies. Pak Agus was already partial to organic fertiliser before he started using bio-slurry. He was in the middle of busy harvesting time when we stopped by to visit, yet he still kindly took the time to show us his sacks of beautifully red, large chillies freshly harvested. Since using the slurry he can collect 15 harvests from each plant, whereas before it was just 10. Pak said the quantity of chillies has been astonishing, he is fetching more money from the local market where he sells the chillies for Rp 22,000 a kilogram.

It was meeting Pak Rujuk Supriyanto and visiting his organic papaya farm which really blew me away. Pak Supriyanto used to work as a supervisor for BIRU, then in 2016 he became a construction partner, it was Paks team that in fact built Pak Agus’s digester. I visited Pak Supriyanto’s papaya farm in May, five months earlier he had planted 600 papaya trees on 2080 m2 of land and so far has used three applications of bio-slurry. Pak’s farm was a stark, impressive comparison to his neighbour’s papaya farm where they only use fertiliser and pesticides. We all stood on the boundary between the two fields of papayas feeling disheartened and sympathetic for the neighbours as the two fields were total polar opposites. Pak Supriyanto’s papaya trees were visibly lush, green, strong and already fruiting beautiful papayas. The results of slurry on papayas is that the fruit can be collected every 10 days and then sold in the local market for around Rp 40,000 per 100 kg. The trees also last four years compared to two years when using fertiliser. It was heartbreaking to see the neighbour’s sick, small and weak papayas and hear that the owners have already spent much money on pesticide and fertiliser applications in an attempt to improve their harvest. Pak Supriyanto expressed much sympathy, as the neighbours were now well aware that next time they will definitely follow his example and use slurry, however unfortunately for this harvest it may be too late. 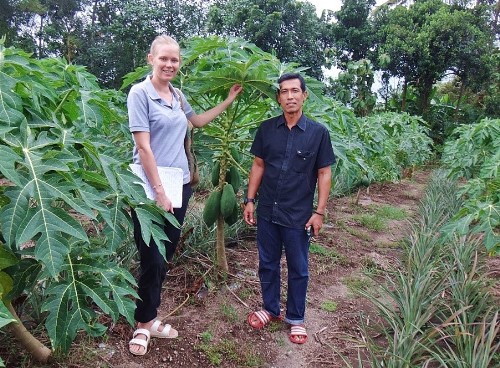 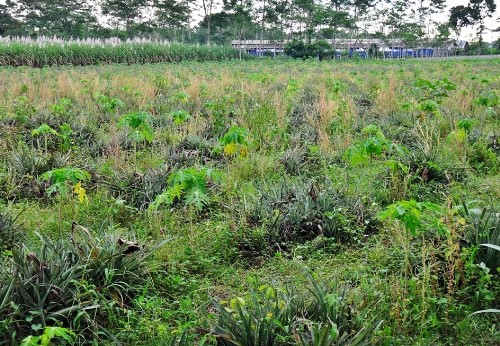 For anyone doubting the benefits of organic farming and bio-slurry, I suggest making a visit to Malang in East Java. The whole area felt a buzz of excitement and progress where owners have embraced their biogas digester and the slurry to enhance their livelihoods. The benefits of less pesticides and fertilizers is not only beneficial for human health, but for the longevity and health of farmers land and crops. BIRU Rumah Energi is certainly helping to provide the whole package, I now understand why much emphasis is put on encouraging users to use their slurry. It isn’t just about the gas, but also about providing an environmentally friendly, more affordable and healthy alternative to generic fertilizers and pesticides. (Louise Waddell)