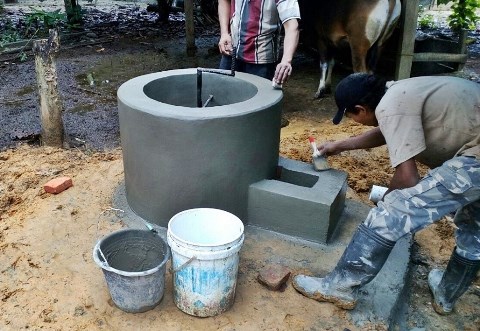 Balinese cattle (Bos Sondaicus) is the most common type of animal raised by the people in South Konawe Regency, one of the regencies in Southeast Sulawesi Province.  In fact, out of the total 250,000 cow population in Southeast Sulawesi, approximately 35 per cent of them are found in South Konawe Regency, as excerpted from AntaraSultra.com web page.  Unfortunately, the presence of Balinese cattle as a farm animal has not provided optimum benefit to the owners of the farm animals.  Majority of the cattle farmers have not enjoyed the benefit of the biogas produced through manures conversion.  Even though the records show that there had been several biogas digester constructed in South Konawe Regency, but most owners only enjoy the benefit at the beginning and ultimately the structure is left idle.

As a matter of fact, the utilisation of cow manures to produce biogas had been introduced to the community in South Konawe through KKN-PPM UGM programme activities in 2013.  Pak Mujie was among the residents of Andoolo Utama Village in Buke Subdistrict.  He is a farmer and owns a Balinese cattle as his farm animal.  Subsequently in 2016, KKN-PPM UGM team established a collaboration with Biogas Rumah to build a 4-m3 capacity biogas digester unit as a pilot project expected to inspire the surrounding community.  The construction process of this biogas digester had been handled by Rumah Energi branch office in Makassar and was successfully completed on August 6, 2016.  It is safe to say that Pak Mujie was the first person in Southeast Sulawesi Province to use Domestic Biogas (BIRU) for his day-to-day cooking purposes while at the same time also utilises the bio-slurry (biogas sludge) for agricultural fertiliser. 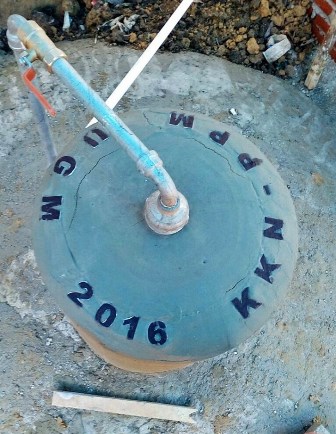 Pak Mujie, as the house owner receiving this domestic biogas have been receiving numerous benefits through the biogas production.  Cow manures which normally annoy the surrounding community, especially during the rainy season, are no longer an issue.  Today, Pak Mujie is able to save LPG consumptions for his cooking purposes.  His wife even uses biogas for their daily consumption.  LPG is used only during certain occasion.  Bio-slurry produced by the biogas is used in his farmland and rice paddy fields.  He acknolwedges that he is satisfied with the constructed biogas digester.  When asked if the biogas is still operational, Pak Mujie responded,

“It still works for me.  It is excellent.  I enjoy using the facility …,” he answered happily.

As his biogas digester age is close to 7 months, he has then adjusted the water volume on manometer used to measure gas pressure.  This adjustment is his own initiative as the water used previously to fill the manometer is depleting thus the pressure indicator on the manometer scale has become inaccurate.

Pak Mujie himself replaces the water in the manometer

During the BIRU construction process, Pak Mujie himself was involved and provides manpower.  He learned a lot from Pak Jufri, one of the mason assigned by one of Rumah Energi biogas construction partner in Makassar.  He learns all aspects of the biogas digester including the construction process, operation, as well as maintenance.  Therefore, he is no longer awkwrard in using the biogas and understand the ins and outs of the biogas.  He is not even hesitant in performing the maintenance by himself.  (Jihan A. As-sya’bani)