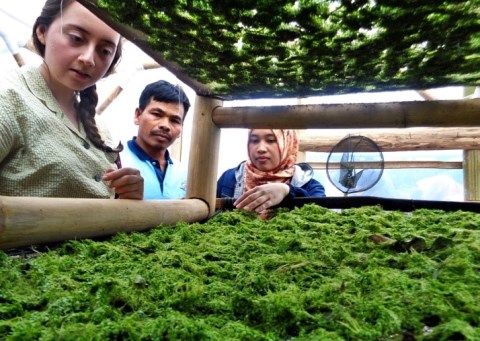 We pulled up at Mekarjaya village next to a soccer field full of teenagers playing soccer under a slight drizzle of rain. Weaving our way around them we plunged into a maze of meandering lanes and pathways that made up the village, going deeper and deeper until we came out into a more open area full of shining green ponds. On closer inspection the large, orderly, rectangular ponds were covered with a fine, delicate layer of tiny leaves. These were the duckweed ponds I’d heard so much about and the reason we were coming to pay a visit to the village.

Duckweed is a small water plant that grows on the surface of water at an incredibly fast rate. The ponds here were normally 5m by 7m and every 2 days one pond would produce 10kg wet weight of duckweed. Boasting an unusually high level of protein for a plant, the duckweed in this particular village had been tested and found to be 26.6% protein. This high protein content was the cause of BIRUs interest in the plant.

While the main focus of BIRU is biogas, the duckweed is also starting to be incorporated into their field of activities. BIRUs main aim is to support their communities in a socially and environmentally responsible way. As a large proportion of the BIRU customers are dairy farmers, duckweed presents a low cost, low effort and sustainable supplement to their cows diet. It can increase the protein intake and consequently health and productivity of the cows and thereby improve the lives of the farmers. 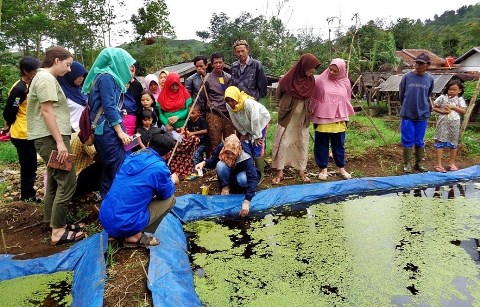 After reaching the ponds we were ushered into a house where we were offered more fruit and cassava snacks than is physically possible to eat. The house was owned by Pak Itan, who was one of the first people in the village to start farming duckweed. He’d built his ponds 4 months earlier with the help of BIRU and had started feeding the duckweed to his dairy cows on a daily basis in the hope its high protein content would be beneficial to the cows. Ever since, he’d noticed that the cows looked healthier and a pregnant cow could produce about 2 to 5 extra litres of milk a day.  What’s more, the milk itself was of better quality.

Since he’d started using duckweed, interest in it has been growing rapidly. His neighbours who are also dairy farmers, amongst many others in the Garut region, followed suit and now there are 80 duckweed ponds in his village and the neighbouring village alone. His local dairy farming cooperative has also taken notice. One of the ways they support their members is through facilitating the purchase of soy bean mix for cows, which also has relatively high levels of protein, but are now trying to encourage the use of duckweed as an alternative. After he heard of the project, the head of the cooperation even paid a visit to Pak Itan farms and is now growing duckweed himself. The involvement of the cooperation is good news for the future of duckweed in the Garut region as they already have a large network of farmers and a lot of reach and influence.

Part of the farming process of duckweed is fertilization. This is done as in order for the duckweed to be as beneficial as possible for the cows, it itself needs to be healthy. For duckweed to prosper and have high nutrient and protein levels the water that the plants grow in needs to have the correct pH and nutrients in it. Adding bio-slurry (the output of the biogas digestion process) to the ponds provides all the nutrients required with the added benefit of requiring no further cost for the biogas users. 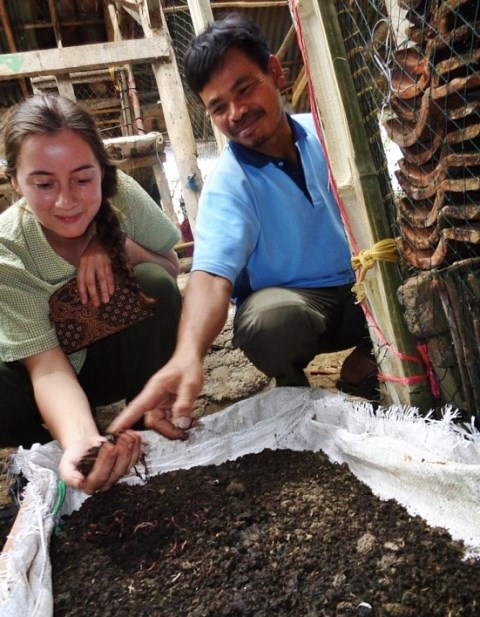 Not only have neighbours started growing duckweed themselves, but they have even been received a few orders of dry duckweed already. The lecturers from nearby Garut University who tested the protein content were evidently so impressed they ordered 20 kg of the product. The farmers are slowly drying their excess duckweed to fill the order. It’s slow progress as the duckweed is still small scale at this stage, they’ve only been using duckweed for 4 months to be fair. However the interest and orders are already coming in after this short time, which is promising and shows that it has potential to become a business. (Myora Kane)