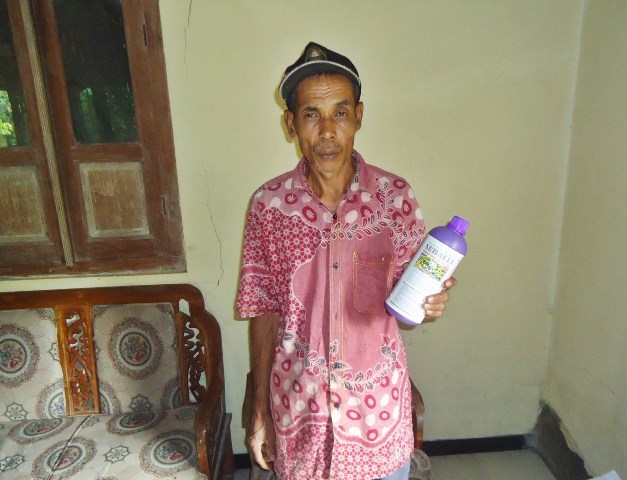 Students returning from school on their motorbikes are ogling the Biogas Rumah (BIRU) car, parked in front of the small Warung. It seems utterly misplaced in this village in the outskirts of Kudus. And that is exactly how we feel. The GPS insists, we have arrived at our destination, but aside from the instant coffee packages proudly displayed in front of the shop and the seemingly abandoned house next to it there is nothing else to be seen here. Just as we’re about to continue our search further down the road we notice a small passageway between the two roadside buildings. The narrow lane finally leads us to the place we were looking for: the home of Pak Musli, owner of a biogas plant by BIRU.

He is sitting in the doorway of his house, sealing bottles filled with an unidentifiable brown liquid. A little girl hides shyly in the corner as we enter. Upon our request, Pak Musli leaves his work to an employee and takes us to the back of his home. In the shade of a makeshift solar panel he shows us the tiny garden he built on top of the reactor. Crossing it, there are neatly arranged gravel paths connecting the backdoor of the house with the stable and the inlet. To each side of the paths Pak Musli grows luciously green kale and delicous chilis. He says, his gardening has become a lot more fruitful, ever since he started using bio-slurry to fertilize the soil. Even the worms he sells as birdfood appear to like it in the environment provided by the organic waste, winding themselves through the moist earth.

When asked about the mysterious fluid from before, Pak Musli’s eyes start glowing and his smile turns into a friendly, entrepreneurial grin. It is obvious that the bottled substance is his pride and joy. In fact, he has every right to be proud of it. The liquid is a multivitamin cure he produces and sells to customers in Kudus, Lampung, Bogor and Kalimantan for a minimum of 35000 Rp per bottle. Only recently, he received an order of 10000 litres, due on February 1st. The product range includes four different variations: one for cattle and goats, one for chicken, one for fish and one for birds. Generally, animals consuming it tend to grow better and be more healthy than their counterparts. The product named “Leptocohus” is based on a mixture of liquid bio-slurry and cattle urine.  Depending on the kind of animal the batch is intended for, other ingredients are added, but these are a company secret Pak Musli adds with a wink. 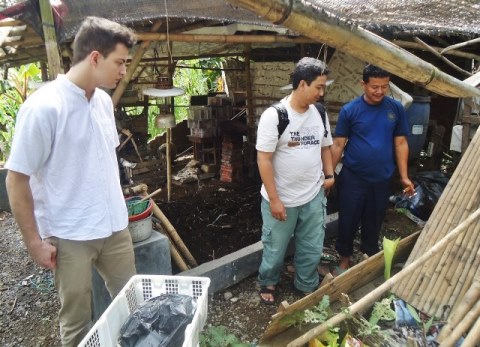 Now, the question I asked myself was: how did he get to the point of eceonomic success he is at now? According to him, he had always been interested in creating the best possible nutrition for his animals, as they were his main source of income. The arrival of the biogas reactor and the slurry added new weapons to his arsenal and he began experimenting even more. Being the resourceful man he is, his efforts quickly drew the attenntion of a distributor from Surabaya. Together, they worked on perfecting the recipe and it seems to work out for them. After all, the demand speaks for itself.

Pak Musli’s story is another example of how BIRU enables users to pursue their dream of innovative enterprises. With the help of BIRU any creative idea can potentially be turned into a prospective business. (Max Schmiel)