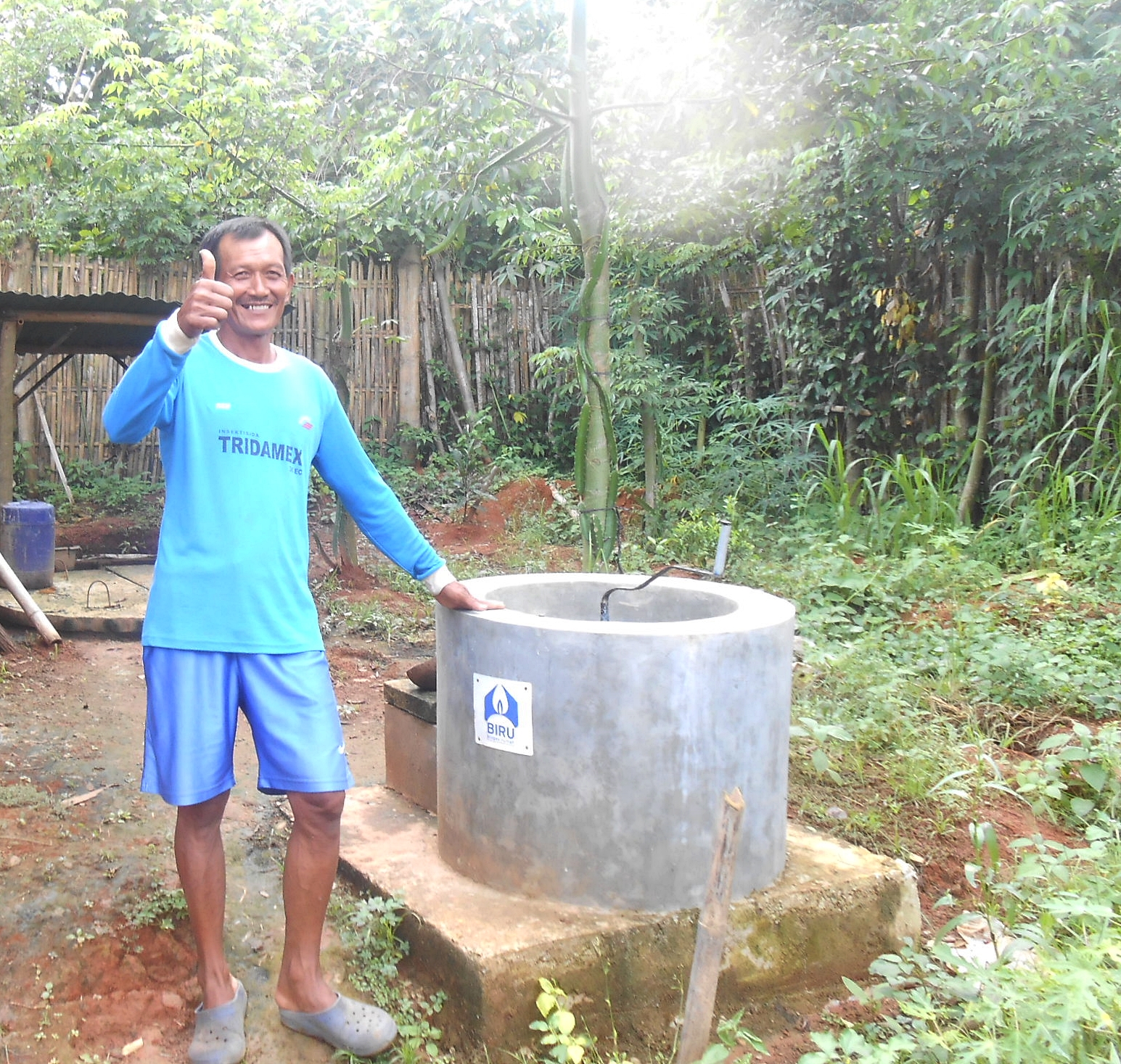 Mr. Sialim’s face, the biogas user with 2 m3 capacity, looks radiant when he welcome us at his residence in Keputran Village of RT005 RW003 Sukoharjo, Pringsewu, Lampung.  Even though he has just returned from his field, Mr. Sialim showed his hospitality and lead us into his residence.  He did not even mind when we asked his wife, Mrs. Martini, to come home for a while as when we arrived she was participating in a routine Al Qur’an studies in the community mosque.

It did not take long until I finally met Mrs. Martini, and her friendliness also was apparent in the face of this middle-aged woman.  We finally started the conversation.

The success enjoyed by the Sialim’s family today is reduced household expenses as they no longer need to pay for the LPGs which approximately cost them Rp 40,000 per month.  Prior to using the 2m3 capacity biogas reactor, they regularly used up 3 (three) 3kg-tank capacity LPGs every month.  Each tank costs Rp 20,000.  However, once they use the biogas they only purchase a single 3kg-capacity LPG as a spare.

It means, their routine expenditures for cooking fuel which normally cost them Rp 60,000 has been reduced to Rp 20,000 per month.  This LPG tank is intended only as a spare of the two-burner stove which they have owned since the very beginning.

Under such condition when the gas inside the reactor is in full capacity, the family can use it up for a 2.5 hours of cooking on a daily basis.  Every day, Mr. Sialim only needs to put in 20 kg or 2 small containers of manures through the reactor inlet.  Such activity is enough to fulfill the daily biogas requirements.

He is also experimenting with overripe papayas which he mixes with the manures before pouring them to the reactor inlet.  According to him, these mixtures will enable him to reduce the amount of manures he needs to provide beforehand.

As the age of his 2m3-reactor is only two months old, Mr. Sialim has not enjoyed the maximum benefit of using the bio-slurry.  According to him, he can only spray the liquid bio-slurry to a maximum of 1,000 stems of his papaya crops.

It takes 15 jerry cans of 35 liter-capacity liquid bio slurry to spray his entire papaya crops.  His success in using the bio-slurry is manifested through the taste of his fruits in which the fruits taste sweeter after being treated with bio-slurry.  Mr. Sialim actually is new to the utilisation of bio-slurry.  He expects to gain more knowledge from the Rumah Energi team with regard to the dosage of liquid bio-slurry application.

Through our visit to Mr. Sialim’s residence, we conclude that it takes only limited parcel of land and a single cattle to utilise a 2 m3 capacity biogas reactor.  The cattle pen is much cleaner as there is no manure deposits left behind while the liquid bio slurry produced may be utilised as a ready-to-use organic fertiliser.  (Ririn Ridiarti)