Even My Beard is Organic 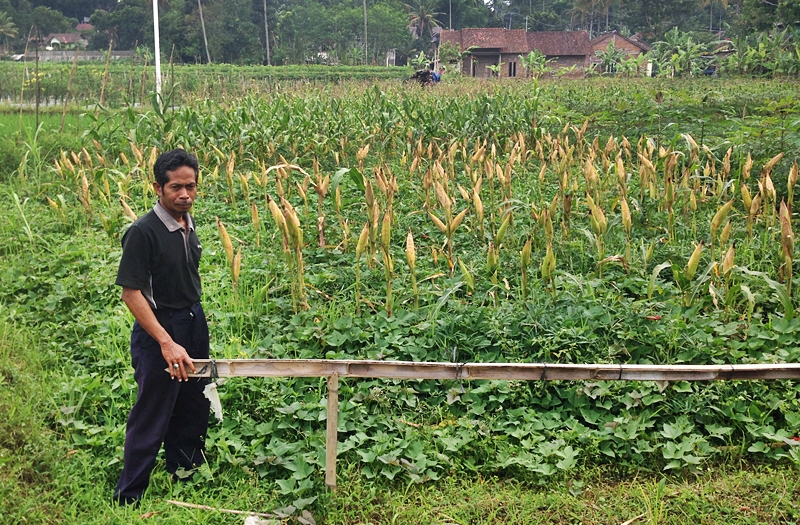 “I used to be a businessman,” says Muchtarum, “I visited Qariyah Thoyyibah during Ramadhan to drop in on a relative, and chanced upon a meeting. I’d never understood organic farming before. After that, it was like I caught a virus.”

Muchtarum is one of Qariyah Thoyyibah’s (ko-ree-a toy-bah) directors. He sits in his office on the second floor of the organisation’s headquarters in Salatiga, Central Java, with a 360-degree view of rice paddies and cornfields. White streaks in his hair, he tells his story with a stony expression, and a sly smirk at the corner of his mouth: “I shut down my car rental business. My wife was in shock. I dropped it all to go back to the village and become a farmer.” This is Java. No one does this.

“Sure, I’ll admit, I’m all back-to-front,” he says, and a smile begins to grow. “But after seven years I received a national award for my organic produce. I can pick up a piece of earth now and tell you exactly what chemicals are in it.” Abdul, another director at Qariyah Thoyyibah, jumps in: “we don’t need an expensive lab, it’s enough to have him smell the ground and say ‘this is organic’, or ‘this needs more work.’”

“The guy’s organic to the bone,” jokes Abdul, eyeing his colleague, “even his beard is organic.”

Qariyah Thoyyibah is unlike Biogas Rumah’s (BIRU) other construction partners. Each province in which the BIRU programme operates has its own office, and forms its respective partnerships with local organisations. Out of the 11 construction partners that build BIRU-style digesters in Central Java, there is no organisation set-up like Qariyah Thoyyibah. In fact, it is the only one of its kind in all 10 provinces under BIRU’s range.

The organisation is what is known as a Perserikatan (federation). Although it has a social, non-profit mission, it is different to the more common NGO or social foundation, in that Qariyah Thoyyibah has a congress. The directors of the organisation are chosen every four years by democratic means. The organisation is currently made of 116 paguyuban (communities), each containing at least three kelompok (groups), which in turn consist of between 25 to 100 members. Whereas many other NGOs and foundations have a handful of staff, Qariyah Thoyyibah has 15,000 members across Central Java.

Their story is also quite like any other partner.

“Qariyah Thoyyibah was formed during the downfall of Soeharto. There was a halaqah, a meeting of Ulamas (Muslim scholars) from all over Central Java,” explains Abdul, who holds a degree in Islamic education. “Their goal was to unite, and find a safe way out of the reformation period. One of the ideas that came up was to make a farmer’s federation.”

“You know, during the Soeharto regime, we weren’t allowed to make farmer’s groups? We had to join ones owned by the government,” says Abdul. “In the ‘70s Soeharto was obsessed that our agrarian society had to produce ridiculous amounts of rice. His method was the ‘Green Revolution’, which enforced over-production, pesticides that kill everything in their path and chemical fertilisers that ruin the soil – we couldn’t even germinate our own rice.”

“The Green Revolution wiped out our farmer’s independence. Government policy destroyed the environment. So we fought the government. Integrated Organic Farming was the soul of our movement.”

From its formation in 1999, Qariyah Thoyyibah has grown significantly. In 2008 it opened a credit union cooperative to provide loans, and a multi purpose cooperative to act as a depot for organic produce. The grounds around its two-story headquarters also feature training centres and demonstration plots, teaching everything an organic farmer needs to know.

Their relationship with biogas grew from a need for fertiliser. The bio-slurry waste from a biogas digester is a ready-made fertiliser – laboratories (and Muchtarum’s nose) have proven its quality. Many farmers are reluctant to switch from chemical fertilisers back to organic, if organic means hours of work preparing compost from farmyard manure. Bio-slurry, on the other hand, is instant.

In 2008 Qariyah Thoyyibah began building biogas with a different organisation, using a two-dome model. In 2012, due to high installation costs, they experimented with the cheaper and more reliable BIRU model, and a partnership was set up from there. To date they have built 275 digesters. According to Muchtarum biogas slots in with the Integrated Organic Farming model, and has potential in his 15,000-strong organisation.

The success of the organic movement has been receiving government attention. Various political figures, including vice-president Jusuf Kalla, have held meetings with Qariyah Thoyyibah. According to Muchtarum, the government has adopted many of their approaches, specifically the current Joko Widodo (Jokowi) government. In 2014, for example, Jokowi announced a programme Seribu Desa Organik, calling for the creation of 1000 organic villages across Indonesia.

I ask them now what their relationship is with the government now. “We’re not under the government, we’re in front,” says Muchtarum.

Abdul adds, “I’m not anti-government. My father was a soldier; he fought for this country’s independence. There’s no way I could ever be anti-Indonesia. My hope is to teach the government that we’re not like we were before. We’re seeing a lot of changes now, there’s cooperation, and sharing.”