Long Journey to a Better World 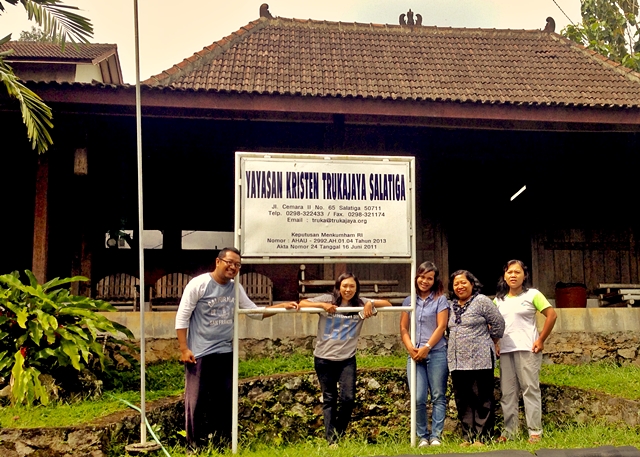 “I used to ask seniors, people with more experience in NGOs, why do they do it? The answer was always: ‘there will come a moment, a point in time, when you will know. Are you here just to make money, or is it a calling?’”

These are the words of Bagus Indra Kusuma, programme manager at the Trukajaya Christian Foundation in Salatiga, Central Java. Bagus admits during a group interview that he left the organisation in 2009, saying that he hadn’t found his answer. By late 2010, though, he had already come running back.

The Trukajaya office is not what one would expect to house a Christian foundation. The building is a traditional Javanese gebyok house, thick beams of teak interlock without nails to hold up a steep, tiled roof – providing natural air-conditioning. The posters on the wall are anti-corruption and anti-water privatisation, pro-reforestation and pro-organic. Wait, what’s organic doing in a Christian foundation?

The Trukajaya foundation is an informal arm of the local synod Gereja Kristen Jawa (Javanese Christian Church), and is known as a diakonia – or an establishment that cares for the poor.  “In 1992 we started a programme for the empowerment of rural communities,” says Bagus, “one of our approaches was with organic farming.”

Trukajaya’s Director Kristin Damayanti explains that the rural villagers who took part in the programme were farmers. “Organic farming was a way to increase their dignity,” she says, “they could meet their financial needs independently. Their lands grew fertile, they cut expenditures and the produce fetched a higher price.” Farmers, specifically in Java, are considered the lowest rungs of society. Organic was a way out of poverty and social exclusion.

This approach got Trukajaya interested in biogas. Their interest was not actually for the gas, but for the fermented remains known as bio-slurry. Bio-slurry is a quality fertiliser, ready to use after passing through a biogas digester. Trukajaya saw many rural farmers owned two or three cows, but were not using the waste. The cooking gas was at first an “add-on” to owning a personal fertiliser machine.

Since the early 90s Trukajaya began experimentation with different types of digesters. They began with a two-dome biogas digester made from bricks; after that they experimented with a tunnel-shaped digester, built using concrete cylinders usually used to construct wells. These digesters were costly, and required skilled maintenance such as welding.

“The BIRU model was cheaper, we didn’t have to use as much material,” says Kristin, “the digesters we have built are still running well, and since 2011 we have built over 200 units.”

Partner organisations build and promote biogas. Staff members at Biogas Rumah (BIRU) act as trainers and technical supervisors, with an office in each province in which they operate. Contracts between partners and BIRU are revised annually, and each partner is given a target of building one hundred digesters per year. Partners range from construction companies, NGOs all the way to religious foundations such as Trukajaya.

This is what drives Trukajaya. Their name comes from Ancient Javanese, and means ‘the long journey to a better world’. The foundation was founded in 1966 to aid the migration of many poor Javanese families, who were moved to less-crowded outer islands in the archipelago during the Soeharto regime.

Biogas is now one of many projects at Trukajaya, which include advocacy, climate change mitigation and entrepreneurship. There is overlap. For example, they help individuals to set up businesses selling fertiliser, using bio-slurry as its base material. They also act as a storehouse for the organic produce of their members using bio-slurry, and sell the vegetables on to supermarkets.

I ask Bagus, 5 years on from his return, if he has found his answer. “I’m still figuring that out,” he says, pondering, “but it was through Trukajaya that I’ve been trained, I’ve traveled to Korea – I even found my wife here.”

“I also found my husband through Trukajaya,” says Kristin, eager to jump in. “For me it’s definitely a calling. I feel comfortable working here; we’re not in the shadow of those better of than us, but helping those in need. I feel I’ve learnt how to live from working with rural communities, how they go through their daily lives sometimes under such difficulty. It humbles you.”

Before we close the interview, the business manager Ratna Puspitaningtyas also elbows in: “I found my husband here too,” she says, and everyone breaks into laughter. “But I also gained weight. Many people like to say ‘thank you’, so if we come and visit, suddenly the food comes out.” A lively debate breaks out over individual weight gains, before a mutual agreement is made, “the best though is mango season, it’s a treat.” (Joshua Parfitt)