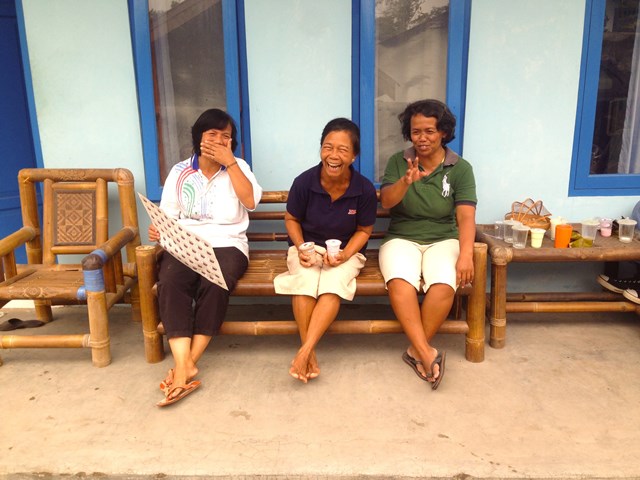 We wind through the slopes of Mount Merbabu in Getasan district, Semarang. The road is pot-holed; we slow down and hesitantly squeeze past a funeral congregation, before arriving at Bapak Harjonokosno’s house on the bamboo hillside.

An old woman comes out from behind the house to greet us. “Bapak Harjonokosno is at the funeral,” she says, sheepishly inviting us inside. We explain it is in fact her, Ibu Sayem, who we have come to see. We have heard that she runs a small family business with her daughter, making donuts. She takes us to the kitchen where a bowl of dough swells over its sides, as if asking to be moulded and filled with chocolate, strawberry or left hollow and cloaked in sugar.

Ibu Sayem is an example of biogas being creatively used to fuel side-businesses, particularly those run by women. In the kitchen, blackened with soot like a blacksmith’s forge from decades of wood smoke, she lights up the clear blue flame on the biogas stove. “We will make 200 later this afternoon,” she says. We came too early.

Side-businesses seem to be something of an attraction in this house. Out in the back garden a paddle of Muscovy ducks snap at my trousers. Through the cowshed we have to step over cassava roots, sweet potatoes and then Elephant grass for the dairy cows. Back to the sitting room we pass by the son-in-law’s aquarium workshop, a table where Ibu Sayem arranges plywood off-cuts for resale, and then notice bags of clothes, which she sells in her “spare time”.

I ask if she has any time to rest. “Yes, of course, I can get time to rest after 10 pm,” she replies with a smile. “It’s normal for me, a village woman,” she continues. She looks around and apologises, “this place is never tidy.”

The house is only untidy to an untrained eye. Everything in the house has its rhythm. Donuts are sold when Ibu Sayem’s daughter takes her young child to school. She drops them off at small shops along the way, and picks up the money when she collects her son from school in the early afternoon. The money pays for her child’s schooling, and buys glass for her son-in-law’s aquarium business. Meanwhile Ibu Sayem arranges plywood, her husband milks the cows, and the wheel of work keeps turning.

“Biogas is a blessing from God,” says Ibu Sayem. The renewable gas saves her time and money, since it cuts her usage of LPG by two-thirds. She also doesn’t have to carry firewood on her back from their plot of land anymore. She gives thanks she can use her extra time to gather grass for the cows.

It is not clear whether Ibu Rumiyati’s house is more living room or show room. The walls display wallets, bags and food covers made from a patchwork of batik cloth. The cupboards at the back show no family pictures, but blankets and bedspreads.

It is also not clear what her profession actually is. Seven years ago, working as a tailor out of the living room, she saw the bags of unused cloth piling up in the corner. “I thought to myself, how can I turn this into money?” Her patchwork crafts can now be found as far as Jalan Malioboro, a popular tourist street in Yogyakarta.

Just a few years ago, another source of waste caught her attention, challenging her creativity. The issue was the stench of droppings from quail birds, whose eggs were a popular source of income in her village at the time. “I thought there must be a way to manage the manure,” she says. “It was rain of waste, how to turn it into a rain of gold?”

Soon after learning about biogas, she created and led a community group of quail farmers in her village. She invited BIRU team to do a presentation in the village, and subsequently made a proposal to a government development scheme. Her proposal was successful, and she received funding for five digesters in her neighbourhood.

“My story is not a success though,” she says bluntly. Through the kitchen, at the back of the house, is the quail bird shed, which just a few months ago was empty after bird flu hit the village. “Everyone’s birds in the village died,” she says, “mine is the only digester in operation again.” The cost of buying 3,000 new quails was around 30 million rupiah, a huge amount of money considering the minimum yearly wage is around 15 million rupiah, Ibu Rumiyati is from a farming family, and has her son’s university fees to pay.

Not only have her and her husband bought the birds, but they’ve also installed a huge blue tank next to the bathroom, to make organic fertiliser. The base material she gains from her biogas digester, which provides a cooking gas and also a nutrient-dense, non-smelling effluent known as bio-slurry. “Maybe it was God’s will our birds died,” she says. “We never know where stars may fall, but it’s not stopped me dreaming of my star.”

The liquid fertiliser has been on sale for two years now, though the product is not in high demand. Ibu Rumiyati complains that farmers are reluctant to try it out, since conversion from chemical fertiliser to organic fertiliser often takes up to three years to bear fruit. The farmers in neighbourhood want everything instantly. Results from a close friend, however, have shown a doubling of rice yields, quicker ripening tomatoes and a richer and healthier soil.

“We are disadvantaged women,” says Ibu Atun outside a cowshed near Mount Merapi, Yogyakarta. “We are so familiar with dead-ends we have to know all the shortcuts.”

Ibu Atun is a member of the Yayasan Seraphine Bakti Utama, a Catholic foundation whose mission statement includes fostering entrepreneurship, encouraging education and planting an environmental conscience in society. A few years ago, working at one of four nurseries run by the organisation, she got thinking about milk.

“We wondered why we were spending this much money when we could make it ourselves,” Ibu Atun explains. A farm location was then chosen near Mount Merapi, where locals were still recovering from a recent eruption. The milk business was intended to help women and children get back on their feet. “This is the heart of a human: to find ways to make money by doing good,” she says.

A few years into making a milk business she hit a dead-end. LPG tanks are not a reliable commodity in rural Yogyakarta, and are often out of stock. Ibu Atun had heard about biogas, and so she contacted a local organisation to have one built. After construction, the promised gas was nowhere to be found. It turns out that the reactor was full of holes; the gas was just leaking out like steam from a pot of rice. “I’m the kind of person though, if something doesn’t work out, there’s got to be another way,” she says.

By fate, Ibu Atun stumbled upon a farmer in the neighbourhood using one of BIRU’s biogas digesters. His biogas stove was aflame. Almost every day she visited the gentleman’s kitchen, checking pipes and fittings, convincing herself that her idea could work. Unfortunately, the seniors of the organisation were not prepared to fund any new projects. They had just forked out a lot of money for a useless biogas digester, why spend all that money again?

“At that time I was in charge of the organisation for a year, so I made my own policy,” she says. “At one point the economic advisor was in Poland, the sisters were in Jakarta and the head of our unit was sick, I fudged the finance reports, sold two of the organisation’s cows, and built the biogas digester.”

What happened was beyond even her imagination. The biogas not only worked, but she was saving up to two million rupiah a month, since she no longer had to buy LPG. She invited all her other colleagues to the farm, and received unanimous support.

“I feel like that this is the biggest trophy I’ve ever held in my life. It was my first victory in 20 years of working at the organisation,” she says, beaming. “Before no one trusted me. Once the biogas was a success, they were happy to hand over to me completely. It feels amazing, now I seek and I find solutions, and I seek, and I find again.”

Ibu Atun’s entrepreneurial knack is influencing the lives of many others. The children and students whom her organisation funds to go school, are now taking the bottled milk to sell before class. Some of them have brought in one and a half million rupiah a month, enough to fund their own education. Local women have got involved too, depositing the milk in small shops as they run their errands, and harvesting the profit on the way back.

“I like to learn as I go,” says Ibu Atun, leading me in her sandals to a recently built bamboo shed, the beginning of her new project. No surprise, she is on to thinking about something else, bio-slurry, and she points to the black mounds of fresh earth waiting to be sold as organic compost. Her farm employs seven workers, regularly houses interns from as far as Vietnam and receives school visits.

We request a photograph of Ibu Atun with two of the women who work pasteurizing, flavouring, and bottling the milk. They are shy, reluctant to come outside. “I look like a cow-shed,” says one of them, cowering behind the door. “I‘m holding this upside down!” shrieks another, clutching a sheet of stickers for the milk pots.

What does it really matter though; after all, we never know where a star is going to fall. (Joshua Parfitt)