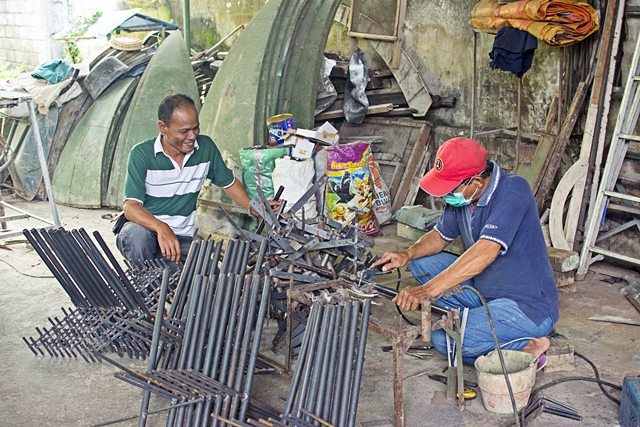 The sound of electric welding machine and metal cutting machine compete with each other at Grindulu 31 Workshop, in Bunul area, Malang, East Java. One ironsmith is seen welding an iron for biogas mixer, while another is cutting the iron for mixer fork. Another worker is packaging the product using wooden case for biogas appliances ready to be delivered to the destination outside Java.

“Pardon for the noise, we are working to fulfill the order,” Iwan Atmojo said prior to start the conversation. “Presently we are busy to fulfill an order from Gorontalo, the biogas project overthere is about to start. Therefore I have to deliver these appliances within this week. I simply praise the Almighty, when demand for biogas construction here is dwindling, I still manage to earn a living taking orders on biogas appliances for biogas project outside Java. It is not bad to undertake these types of work which at least enable the workers here to meet their end needs,” Iwan continued. Outside the room, we see the piles of stoves, manometers, and waterdrains neatly packaged in wooden cases.

Iwan Atmojo is the owner of CV. Karsa Tekad Mandiri (or simply known as ‘CV. KTM’), one of construction partner organisations of BIRU Project in East Java. CV. KTM itself has been a construction partner since 2012. Initially it took orders from several dairy cooperatives in East Java. As the provider of biogas construction service, CV. KTM is a parent company of a subsidiary, Grindulu 31 welding workshop, which also produces several types of appliances or biogas equipment.

“Frankly, I have in fact been exposed to the Domestic Biogas (BIRU) technology since 2011,” Iwan said, “at the time I just opened my welding workshop, and then Mas Wasis (the Provincial Coordinator of Rumah Energi for East Java Region, Ed.) challenged me to build a biogas dome formwork. It was time to cast the dome using earthfill moulding or using the piles of husk sacks. A simple method but requires a lot of energy and takes a lot of time. As a matter of fact, during the time there had been a construction partner in Malang and Kediri who built two iron formwork models. I was asked to refine those two models of formworks.”

Iwan continued,”actually my interest was nothing but because I was challenged. I still remember Mas Wasis’ words when he ‘provoked’ me. At the time he said there are too many welding workshops which take orders on building fences and canopies in Malang. If you want to open a business, choose an exclusive one. The one without too many competitors. I was inflamed with his provocative words,” Mas Iwan continued laughingly when he recalls on the day.

“I modified those two formwork designs specifically for the 6 cubic meter size and as a result the modified designs were adopted by BIRU project. BIRU even ordered several units to be distributed to five Rumah Energi representative offices in other provinces as a model for the construction partners there. Subsequently formwork orders from construction partners in East Java as well as in other provinces came pouring in. I then developed the design for a size of up to12 cubic meter.”

Later on BIRU offered me to participate in the production of other BIRU appliances such as manometer, mixer, SAMIN waterdrain, and primary gas pipeline. Iwan then once again modified the existing mixer design to a knock down type.  With a knock down type, to clean the grime in the inlet, we can simply remove the mixer. In case of mixer malfunction, then it would be much easier to replace as it is knocked down with nuts and bolts. This is what sets the modified design apart with the initial mixer design which was directly installed in the inlet. With the initial design, you have to slightly remove the top part of the inlet wall.

When asked about his experience in developing biogas commercial market as mandated by BIRU Programme, Iwan replied, ”being a BIRU partner is a bit tricky. In terms of the biogas technical construction, it is relatively simple. What is difficult is searching for potential users, dealing with difficult users, and even dealing with the masons which are not that simple. I once totally deconstructed and rebuild a biogas digester in Blitar due to its poor quality.  It turned out that the mason cheated on me. I lost a lot of money due to the case. I had nobody to turn to. It had to be done, for the sake of quality assurance. As a construction partner I have to be consistent. Following the incident, I have to strictly supervise my masons.”

Mid-2013 was a rebound for CV. KTM. The Director General of New, Renewable Energy, and Energy Conservation provided a Direct Assistance in the forms of materials for biogas construction. A total of 1,500 special packages were distributed for East Java region. Out of seven material items for biogas construction, two items were built by CV. KTM specifically manometer and waterdrain. Iwan said the orders came in a short notice while they have to be completed within a short period of time. He did not have enough manpower to complete the order, and consequently was compelled to recruit more manpowers to enable him to deliver the orders in timely manner. As he focused on the target completion date, Iwan did not focus on the quality control especially those jobs performed by the newly recruited manpower. Ultimately he received so many complaints due to leaking waterdrains. In order to keep his promise on the quality assurance, he had to recall all of his defective products. As a result, he received hundreds of leaking waterdrains due to improper application of adhesives. Following the refurbishments, he resent the products to construction partners. He then subsequently fired all of the manpowers who failed to adhere to the quality standards.

Iwan Atmojo admitted that his business was in the verge of collapse. According to him, it happened in early 2015 due to cashflow problem with CV. KTM. The issue was incited by the cooperative partners in charge of loan disbursement which failed to settle the payment of 10 biogas units constructed for its dairy farmers’ members.

Iwan explained, ”initially the cooperative contacted me on May 2014 and requested to serve the demand of biogas digesters from their members. I was asked to start the project. I completed all the orders by the end of 2014. When I sent them the invoice, it turned out that they had no funds at all.  Fortunately, BIRU Project and PT. Nestle Indonesian Kejayaan Factory lent their hands, they collaborated to resolve my problem until the cooperative finally met all of its obligations to me on March 2016. Frankly, I was bewildered.”

When invited to discuss the strategy implemented by CV. KTM to promote biogas, Iwan explained that in East Java alone, construction partners have different backgrounds.  Majority of them are dairy cooperatives, NGOs, and Commanditaire Vennootschap (Limited Partnership). One of the advantage of the cooperative is its membership and clear organisation structure starting from the management down to its dairy farmers members. NGO also maintains a number of advocacy regions. There were almost no issues with respect to promotional activities with those two models of construction partners. Common problem that most of them encounter are community’s purchasing power.

“Construction partners such as CV. KTM have a hard time. We received support from BIRU Programme and PT. Nestle Indonesia Kejayan Factory for promotional activities and we responded to the demands of a number of small scale cooperatives. These cooperatives are part of PT. Nestle Indonesia Kejayan Factory suppliers and there are only limited number of potential customers in this market. In addition to the cooperation established with cooperatives, we also cooperate with biogas constructors at Gresik District and Local Administratives of Gresik District, as well as participate in PT. SAKA CSR, and Petrogas CSR activities in Sumenep Madura.”

Iwan then continued, ”when the demand started to decline, I started to think on my strategy to keep this business sustainable, at least is the welding workshop. Finally I subscribed to indonetwork membership (business directory site/online MSME business directory). BIRU also gave its assitance in the form of a one-full year membership to indonetwork. I used the ‘biogas specialist’ tagline for my business.  Praise the Almighty, CV. KTM started to gain public exposure particularly as the producer of biogas tools and equipments. Initially, order came in from East Nusa Tenggara, then subsequent orders came from Sulawesi and other regions.”

All of the biogas digesters constructed by CV. KTM were located in East Java. There was only one order to build three units of biogas digester in Mimika District, Papua. When he was asked to share his experience in Papua, Iwan then replied, “I had enough of it, my loss was greater than the profit. It was the local contractor who made a bigger profit. They were the bid winner of a biogas project. They were inexperienced and had no expert in fixed-dome type biogas construction. They came to Malang to invite me as the sub-contractor with a rather lucrative offer. It turned out that the environmental conditions were so challenging. The geographical conditions of the marshy and peatland compounded by the constant rainfall had made it difficult for the construction process to complete. I missed the deadline and all the expected profits were gone. The experience had taught me a lesson not to accept an offer to build a biogas digester outside of my home island. I would rather be a vendor supplying biogas tools and equipments in case there are biogas project offers in other provinces,” he concluded.

Today, CV. KTM is experimenting on developing an electricity generator using hybrid carburetor which enable the use of ordinary petrol, LPG, and biogas as the fuel. CV. KTM is also planning to develop a 2 cubic meter capacity biogas digester which may be used in areas with limited space such as in residential areas and urban areas. (HBN/Mlg).