Make Your Money Back … and More 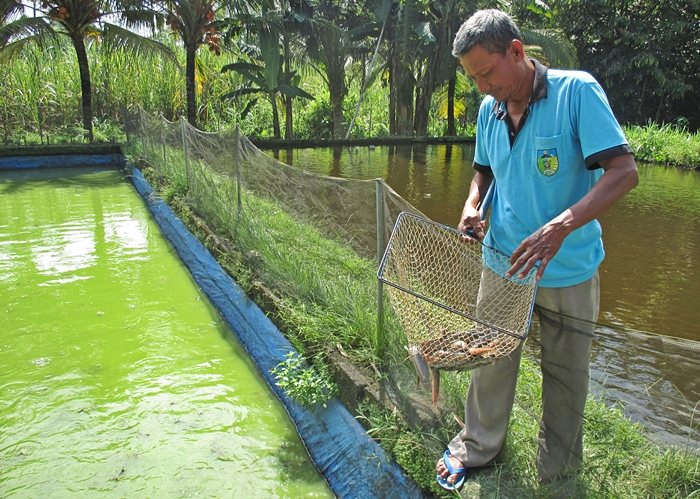 “You know, I will always be ahead of other farmers. You can have poop without eggs, but you can’t have eggs without poop, and I’ve calculated that for each dropping from one of my birds, I’m making 5 rupiah. So I tell the others ‘you’re selling for 255 an egg? I’m making 260.”

Pak Arum looks around his living room as his guests burst into laughter, but behind his smirk are real facts. The 45-year-old quail farmer from Blitar, East Java, is saving over 6,000,000 rupiah a year, thanks to biogas which slashes the LPG needs of his daily catering business.

The homemade bolu kukus (steamed sponge cakes) laid out on the table are fluffy and soft, a perfect match for sweet tea. After sending off a morning dispatch of risoles (rissoles), Pak Arum settles down and begins to tell his biogas story.

“I’ve seen a lot of social conflict around here,” he says, “I’ve seen neighbours complain to the local council about the smell of quail waste, it made me reluctant to get into farming before. It was only after hearing that the waste could be turned into biogas that I felt brave enough to start.” After looking up BIRU on the internet he made a few calls, eventually getting into contact with a supervisor from one of BIRU’s local Construction Partner Organisations, Pak Rujuk. “I contacted Pak Rujuk and he happened to be building a biogas digester round the corner from me!,” Pak Arum says, “he came to visit, and then took me to see the digester, I was curious and keen to get all the facts.”

Pak Arum had his 12m3 biogas digester built in July 2015, however it is not yet running at full capacity. The 20kg of waste that he puts into the digester each day could be safely increased to 60kg. Pak Arum is now planning to increase his bird population from 1,000 to 3,000.

Pak Rujuk says that his client’s decision is based more on the ‘poop’ than the eggs.

According to Pak Rujuk the potential for biogas in the egg-farming market is very promising. However, biogas is faced with two main concerns: the cost of a biogas digester, and that most farmers already sell their waste as compost.

Domestic biogas digesters come in sizes 4m3, 6m3, 8m3, 10m3 and 12m3. In Blitar, a 12m3 biogas digester will cost a farmer around 10,000,000 rupiah, a reasonable sum of money considering the minimum monthly wage is around 1,300,000 rupiah. However, many biogas users are finding that they can quickly recover their costs. The reduction in LPG, for example, means Pak Arum will have broken even in just over a year and a half. By increasing his number of quails, this time would be cut to less than a year.

This doesn’t mean that quail farmers need to start a catering business, Pak Miseli from Kediri has an intriguing story from his fishponds.

With the installation six months ago of a 6m3 biogas digester, Pak Miseli no longer needs to buy LPG. To feed his small family the yearly savings add up to around 900,000 rupiah. Biogas, however, doesn’t just give the owner a cooking fuel, there is also a fermented by-product called bio-slurry. This bio-slurry does not smell, can be used straight away as a fertiliser, and has many more applications, including fish feed.

“Before using bio-slurry my Gurameh and Lele were always getting sick,” tells Pak Miseli, “and their growth was slow. By adding bio-slurry to my ponds I am harvesting two months earlier than usual, I don’t use as much konsentrat (fish feed), and the fish are much healthier. Bio-slurry promotes plankton and natural fish food in the water.” From Pak Miseli’s figures, BIRU have calculated that the savings in fish feed for Gurameh alone are 5,400,000 rupiah per eight-month harvest. Since the cost of a 6m3 biogas digester is 6,500,000 rupiah, Pak Miseli needs two harvest cycles to make more than his money back.

These numbers are substantial when compared to selling quail waste as a fertiliser. One 50kg sack can be sold for 7,000 rupiah, which means that with 1,000 birds Pak Arum could make just one million rupiah a year. Since using biogas also removes the issue of smell, Pak Arum is enthusiastic that his story could be inspirational to other farmers in Blitar. He has already encouraged over 45 friends and acquaintances to invest in the technology.

Earthworms – A New Form of Livestock

There are roughly 7,300 biogas digesters in East Java. Of this figure, around 6,700 are owned by dairy farmers, thanks to the efforts of milk co-operatives to promote the renewable technology.

Back in 2013 the Construction Partner Organisation LPKP (Lembaga Pengkajian Kemasyarakatan dan Pembangunan) wanted to use this opportunity and help a group of dairy farmers from the KUD Karangploso milk co-operative in Karangploso, Malang, to make money from their bio-slurry.

To do this they introduced farmers to a new form of livestock, the earthworm.

One of the first 15 members of a special worm-farming group, Pak Soleh obtained a starter 5kg of worms in 2013 and has been growing them ever since. He arrives to the meeting with BIRU carrying three huge bundles of elephant grass to feed to his seven dairy cows. After depositing the grass in a cowshed annexed behind his house, he comes through to the sitting room to share his experience.

“Back in 2013 I would say I was satisfied with my purchase of a biogas digester, but my wife was not,” tells Pak Soleh. His wife Ibu Rofiqoh enters the room with sweet tea, freshly boiled with biogas. “Look,” she explains, “I was confused. What was the meaning of the BIRU slogan ‘turning waste into wealth’? Sure, we weren’t buying LPG anymore, and I was amazed that cow poo could catch fire, but the bio-slurry was still just being thrown into the river.” She hands out local cassava krupuk before pausing and adding, “only after the worms came did I really understand the meaning of BIRU’s slogan.”

In 2014 Pak Soleh made a total of 10 million rupiah just from selling worms. Since he owns a 6m3 biogas digester, this means that in eight months he would have already made his invesment back. Furthermore, whereas quail farmers Pak Arum and Pak Miseli are saving money, Pak Soleh is actually making money. (Joshua Parfitt)

For a time Pak Soleh’s worms were bringing in between 700,000 – 800,000 rupiah every two weeks. This money paid for his children’s schooling, allowed Pak Soleh to host a large family event at short notice and helped to increase his number of cows from three to seven.

“Before when I was short of money I would sell one of my cows,” says Pak Soleh, “now I just need to sell my worms.”

This success was not just felt by Pak Soleh. Pak Untung, also from the same group in Karangploso, recalls making 2,800,000 rupiah in one month from worm sales. For a time, the number of members in the special worm-farming group grew from 15 to 68.

Besides large orders, primarily purchased by prawn farmers, Pak Soleh has been able to find many other uses for his worms. The bio-slurry left behind after a worm harvest, known as kascing (bekas cacing), is a high quality compost. Pak Soleh has been able to sell his kascing for 15,000 rupiah per sack, and uses it on his own agricultural crops. Alongside this, he has been feeding the worms to his team of 10 ducks, which slashes his need for konsentrat (duck feed) by over 90% saving close to 300,000 per harvest cycle.

“We have also been selling them 5,000 a handful, for medicinal purposes,” explains Ibu Rofiqoh, “there is this traditional Javanese method for treating Typhus, boiled worms!” she laughs. “A while ago Pak Soleh was sick for days, almost two weeks had gone by and he still wasn’t getting any better. I said he should drink some boiled worms, but he shouted back ‘hell no!’ Later, while he was sleeping I made him some tea, I slipped a worm in for a minute, then took it out and left the tea by his bed. The next day he woke up feeling great, and I never told him about the worm.”

Pak Soleh, having now forgiven his wife, giggles along before adding, “Indonesia is famous for having many healthy spices, it turns out that my worms are now among them!”

A characteristic of the BIRU project is that biogas digesters are not given out as charity, BIRU are in fact trying to open up a new market. According to Pak Wasis, the Provincial Co-ordinator for East Java, only when there is a financial investment are users motivated to make the most out of their purchase.

It is because the market is growing that business owners, such as steelworker Pak Iwan, are also interested in the technology.

“I began making biogas digester parts in 2011,” says Pak Iwan in the office of his steel workshop, “it’s been worth it for my business, the opportunities are huge, and not just in East Java. I’ve had orders from Papua, Lampung and West Nusa Tenggara, right now I’m preparing an order for 120 digesters to Sulawesi. The orders keep coming.”

Not all the digesters are being built with the BIRU project, many are being sold to the government or other programs. Despite this, Pak Iwan says that, “they all want the BIRU-style biogas digesters.”

The high quality of BIRU’s digesters is very familiar to Pak Iwan. The steelworker is also the owner of a Construction Partner Organisation building biogas digesters for BIRU, and had to fire a mason for poor quality work. The digesters were then destroyed and rebuilt at Pak Iwan’s own cost. “We need to guarantee a high standard of our technology if we want to be taken seriously,” confirms Pak Wasis.

“We are looking to make more innovations, we want to expand the market,” says Pak Iwan. “We are currently learning to adjust diesel engines to run off biogas, and we would be working on tweaking diesel-powered electricity generators if we weren’t swamped with this order from Sulawesi!”

Pak Hermanto is a poultry farmer from East Java, he recently installed biogas and is using the gas to warm newly born chickens. He is excited about the potential for biogas to get into the poultry farming sector, but complains that, “many poultry farmers do not know about the benefits of biogas, and are turned away by the price. If biogas could offer more than gas and fertiliser, perhaps electricity, I believe they would be flooded with orders,” he says to BIRU on the phone.

Though, as it turns out, biogas and bio-slurry can be lucrative, BIRU travelled to Salatiga, Central Java, to learn about some new developments.

In a small cowshed behind Pak Yusmin’s house is a grass-cutting machine that has been running solely off biogas for six months. Around the corner a milking machine has been running on a biogas-powered electricity generator for the same time, only out of operation after being kicked by a runaway cow.

Pak Yusmin’s son, who has been modifying diesel engines to run off the biogas, says the process is remarkably simple. “I was just on my way to Semarang to buy another diesel electricity generator before you turned up to interview me!” he says.

“Next time you come,” he points to the television in the corner of the room, and the lights on the ceiling, before continuing, “all of these will be powered by biogas.” (Joshua Parfitt)