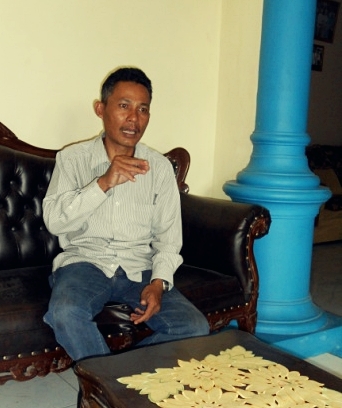 Sudiman is the Head of Sangun Ratu Village who has allocated Village Funds to build Domestic Biogas (BIRU) in Lampung Province.  Presently, 15 units of BIRU reactors have been constructed financed by 2015 Village Funds.  Subsequently in 2016, 20-30 units of biogas reactors are due for construction, which are expected to commence at the end of July 2016.  This is an extraordinary achievement, considering that up to now, Sangun Ratu Village of Pubian Subdistrict in Central Lampung District is the only village in Lampung Province which has budgeted the construction of BIRU reactor.  These construction projects were financed by the Village Funds.

Sudiman is very close with his people and shows a great care to his people’s interests.  When Rumah Energi team and REGOL Mason Group, which is the biogas construction partner, visited his home, he warmly welcomed us and told all the stories enthusiastically, with regard to the process and the early adoption of ideas to build BIRU reactors in his village.  When we asked him what were his considerations when thinking about building BIRU reactors, he replied,  “The considerations were simple, BIRU reactors were beneficial for the people and they were highly economical.  People can take advantage of the cow manure, the gas produced by the reactor for cooking, and additionally use the slurry as free fertilizer.”

Those are the reasons why Sudiman was convinced to choose to allocate budget of the Village Funds to build BIRU reactor.  According to him, people from all walks of life were invited to submit their proposals to the village administrative.  When their ideas were deemed feasible and beneficial for the people, “I will almost certain support it!” he said convincingly.  Subsequently he said, “My duties were easier that way, I did not have to trouble myself thinking about the program to launch.  Hehehe …,” Sudiman explained in a bit of funny tone.

One of the most important thing according to Sudiman, who are now in his third office terms as the Head of the Village, “The keyword is socialize the Domestic Biogas (BIRU) Programme to the head of the villages.  There are plenty of head of villages who are unaware about this program and the benefits of BIRU reactors.  We have to make sure that the Village Funds are expended on worthy program.”

The next question is then, “How much budget is allocated to build the BIRU reactors in this village?” The Head of the Village replied, “It was a small amount.  How much did I spend?,” he asked Irpan from REGOL Mason Group, the Lampung BIRU Programme construction partner.  “Approximately less than 5% annually,” Irpan replied in helping Sudiman to recall the amount.  “Yes, it was less than 5%.  However, we have planned to allocate approximately 20-30 households to receive additional amounts annually,” Sudiman complemented his response.

Is there any specific criteria for the people to receive BIRU reactor funding?  “They have to be cattle farmers, so that the potential of the cattle in this village will steadily increasing!” Sudiman replied.  “We also tried to avoid social unrest within the community.  What if you are not a cattle farmer?  It would become your burden when it is left unused,” he explained to support his previous response.  Irpan then added, “Those who do not raise cattle, are welcome to build their own BIRU reactors using community raised funds or using their own money.”

“It was such a bold move of yours, becoming the pioneer to allocate Village Funds to construct BIRU reactors.  Was that move motivated by your knowledge on the legal basis? Such as the Government Regulation, Laws, or perhaps the Implementation Guideline and Technical Guideline?” the Rumah Energi team raised all those subsequent questions to him.

Sudiman then replied to the questions,”I was in fact did not remember all the laws and regulations.  What was the year when the law was introduced? Hahahaha.  But I am sure there is one, one thing that I remember is, you are not allowed to buid a place of worship, village administrative building, or village meeting hall.  That’s it.  Hehehe …

“Wow, then how did you carry on, Sir?” is the subsequent question asked by Rumah Energi team who was a little puzzled.  Sudiman then replied, “Yes, at the time I asked the village partners, both at the subdistrict and district levels.  This actually similar to PNPM Mandiri (National Program for Community Empowerment) with partners attached to the program.  I consulted with the partners and they said it was okay.  So, I proceeded with the plan.

However, prior to the commencement, I seriously studied what Domestic Biogas Programme was all about.  I visited those who have installed BIRU reactors independently.  I asked them one by one with regard to the issues they encountered, and the benefits they enjoyed.  It turned out that they were very beneficial for the community.

“So, that’s how you proceeded?  Very well, Sir.  This may serve as an example for others,” Rumah Energi team was satisfied with Sudiman’s response.

Irpan added, “Essentially we are here, when an issue arises we will communicate, we often hold consultation here, sometime even during the night time the Head of the Village summons me.  When a problem arises we consult with the village partners.  BIRU reactor is in line with Village Fund Allocation.  Anyway this is a Community Empowerment Program especially later on during the development phase of organic fertilizers and the pesticides.  This program actually concerns with Agricultural Program in the village which is the core of village community development.  Therefore, it shall not be a problem to utilize the Village Funds.”

Furthermore Sudiman added, “If I am not mistaken, the program which concerns the utilization of natural resources and environment may be budgeted from the Village Funds.  Biogas is one of them.”

The subsequent question, which was also the last question, “How is the process of Village Funds’ withdrawal process up to the completion of BIRU reactor construction in this Sangun Ratu Village?

Sudiman explained elaborately, “Initially it was started with community proposal, which in this case here is proposed by the Farmers’ Group, which I then discussed in Village Consultative session (Village Consultative on Development Planning).  During the session, decision will be made, while the budget will be allocated for the development process.  There were plenty of feedback from the Education, Health, Physical Development Programs, and so on.  Plenty of community figures were present, such as religious leaders, community leaders, youth community leaders, farmers’ groups and so on.  Once the Village Funds were allocated, they were then disbursed.  The village funds were distributed through village bank account, which was then disbursed by the Village Treasurer.  The funds then were distributed to the Farmers’ Group to construct biogas.”

“Thus, the construction of BIRU reactor in this village is accomplished through the farmers’ group.  Am I correct, Sir?” the Rumah Energi team asked Sudiman.

Subsequently Sudiman explained, he has just been re-appointed for the third office terms as the Head of Sangun Ratu Village, Pubian Subdistrict, Central Lampung District for six years (2016-2021).  As for the construction of BIRU reactor, it has been included in the Mid-term Village Development Plan.  It means that BIRU reactor for the community has certainly been budgeted and he is convinced with the fundamental foothold of the development in his village.

“What about the future plan once all the BIRU reactors have been installed? I heard from Irpan, there will be a plan to develop an “Energy Self-Sustaining Village” here? The question directed by Rumah Energi team was immediately responded by Sudiman.

“Yes, that is part of the plan.  Once all the reactors have been installed.  Current plan is to have all the construction completed by the end of this year.  We may officially launch it on December 2016.  We will see how it all progresses.”

The Rumah Energi team subsequently tried to add, that Sangun Ratu Village is not suitable as an “Energy Self-Sustaining Village” only, but also a model of “Energy and Food Self-Sustaining Village” for they have identified promising agricultural activities and produce.  These objectives may be achieved as long as they are complemented with the progressive farmers’ group hard work as well as close and harmonious relationships among the community, farmers’ group, and village apparatus.  Sudiman replied, “Yes, that would be alright, we agree to work it through such methods.”

Finally, after receiving a clear illustration on Village Funds and their utilisation for BIRU reactors, the Rumah Energi team started to elaborate the flow of Village Funds distribution at Sangun Ratu Village, in line with Sudiman’s explanations, in the following flowchart: 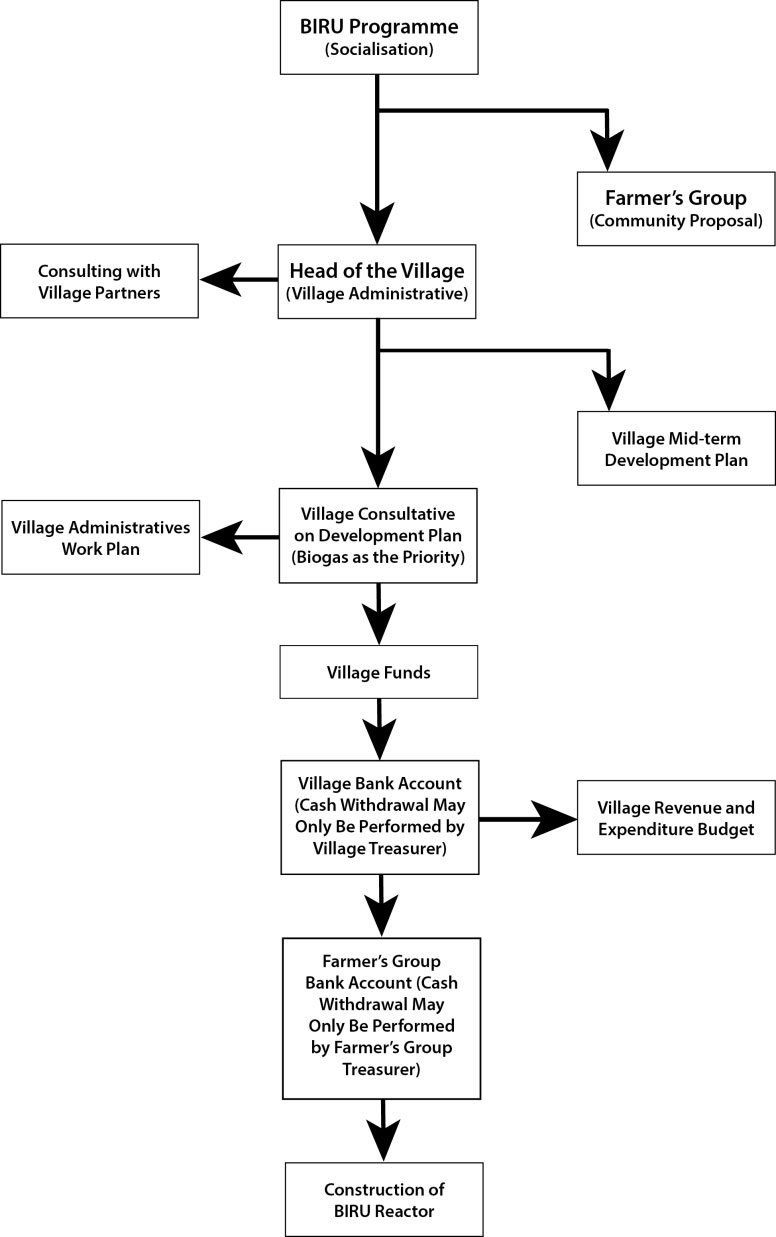