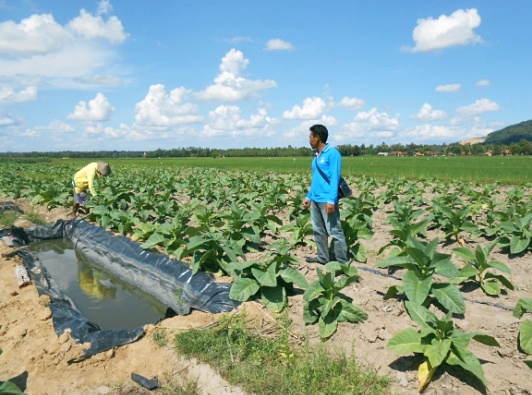 Based on his own experience, so far the farmers’ groups have always been involved in village development programmes, as majority of the village inhabitants in Sangun Ratu are farmers (which make up approximately 70% of the inhabitants).

Initially Irpan socialised BIRU Programme to members of farmers’ groups, then he tried to lobby the village administratives.  Through village consultative sessions, BIRU reactor construction programmes through Village Funds Allocation were finally approved, very much welcome by all ranks in the communities, including the head of the village, Sudiman.

During 2015, as many as 15 units of BIRU reactors have been constructed by REGOL Mason Group using Sangun Ratu Village Funds, while in 2016 there will be approximately 20-30 units for the next reactor construction project.  Since the beginning of 2016, a work plan and pre-construction form for the candidate beneficiaries of BIRU Programme have been submitted to Rumah Energi.  Sudiman explained that the next reactor construction project will commence at the end of July 2016.  Within such form, a description on the funding composition of BIRU reactor construction, which are made up of three parties, are specified namely the community portion at Rp. 2,100,000,-; Village Funds portion at Rp. 4,100,000,-; and BIRU Subsidy portion at Rp. 2,000,000,-.

As of 2016, REGOL Mason Group has finished constructing 36 BIRU reactor units at Sangun Ratu Village.  The details are as follow:  13 reactor units were constructed using fund raised by the communities, in which nine of them used funds raised through revolving fund system as a start for all members of REGOL Mason Group, 8 units were grants provided by the Office of Energy and Mineral Resources of Central Lampung completed by REGOL Mason Group.  Meanwhile, 15 additional units were constructed by utilising Village Funds.  Therefore, approximately by the end of 2016, 50 BIRU reactor units will have been completed in Sangun Ratu Village.   Of course, the number will steadily increase in the subsequent years.

Hence, Irpan and his fellow members of REGOL Mason Group, have planned the development of “Energy Self-Sustaining Village” in Sangun Ratu.  This plan has been communicated with Sudiman, as the Head of the Village and has been approved.  The advancing agricultural activities achieved through farmers’ groups, have even opened up the possibilities on expanding the ideas into “Energy and Food Self-Sustaining Village.”

Based on the findings, some biogas users have been identified to utilise bio-slurry fertilisers for their rice paddy in the rice fields, vegetables such as eggplants, chilli pepper, tomatoes, and so on.  What is more satisfying is that the farmers’ group agree to manage bio-slurry fertilisers produced so that members of the community, both owners of BIRU reactors and not, to utilise them.

As an example, it is agreed that some of the community members who grow tobacco plants in their three-hectares land area, to receive an assistance in the forms of bio-slurry fertilisers from biogas users managed by farmers’ groups.

This method has certainly led to an even distribution and equality among members of community.  The strategy is expected to facilitate REGOL Mason Group in expanding their marketing BIRU reactors within the community.  As a matter of fact, right now a discussion is held together with the Head of Village to open up dialogues with other head of villages to market BIRU reactors to nearby villages, especially using Village Funds approaches. (GTU)