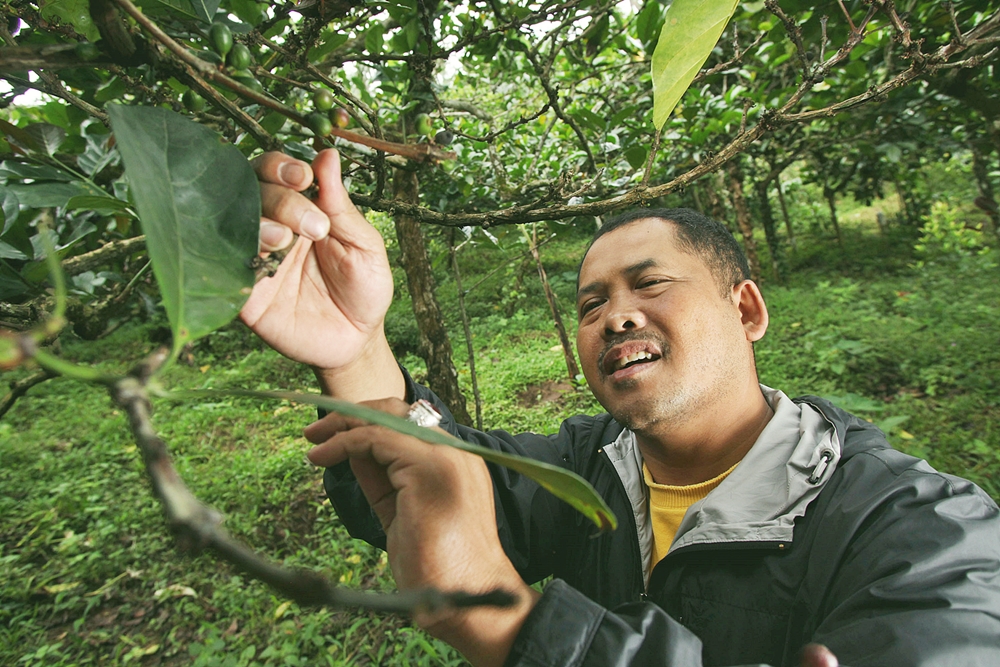 “I need a BIRU Team to accompany me during the conversation with the Head of Subdistrict.”

“We are about to have a conversation on how to construct a biogas reactor for small cattle farmers without the the required capacity and resources, yet involves BIRU programme.  For your information, this is the decision made by the Head of Subdistrict himself.”

“Tell me the story on what led the Head of the Subdistrict to such an idea?”

Based on the conversation over the telephone, the BIRU Team/East Java Rumah Energy joined the discussion which involved the Kertajaya Kandangan Village Unit Cooperative, Langit Biru Mason Group, and the Head of Kandangan Subdistrict, Kediri.  The conversation started with the elaboration by the Head of Kandangan Subdistrict on Pola Hidup Bersih dan Sehat  (Hygienic and Healthy Living Habit) programme launched by the Regent of Kediri.  Within the context of environment, where majority of the village inhabitants are cattle farmers, the focus of this programme is to attempt to minimize the mounting manures or discharge of manures to the river.  BIRU Programme is considered as a feasible choice to support the programme implementation.

“I sincerely hope that BIRU Programme may support the implementation of this plan,” uttered Gembong Prayitno, the Head of Kandangan Subdistrict.

“We are certainly delighted to have identified this opportunity, but obviously we have to ensure several things.  One of the question that we have is whether this programme is fully subsidised?  I certainly hope not.  Then, where will the source of funds come from?” Wasis Sasmito, the Provincial Coordinator for BIRU Programme/East Java Rumah Energi, responded.

“As a matter of fact I have heard the implementation of BIRU Programme in Kandangan, I then plan a multiparty funding of biogas construction.  I do hope that we can secure a little fund support from the government, so that we can build more biogas installations.  The source of the funds will be very likely coming from the Village Funds,” the Head of the Subdistrict replied.

We then reached an agreement to prepare a construction plan of biogas installation in Medowo Village, selected as the site of Hygienic and Healthy Living Habit pilot project programme, by taking into consideration the total unit which needs to be constructed to enable the accomodation of manure waste in the village.  However, following the discussion, there has not been any follow-up information.  Up to early 2016, Agus Purnomo forwarded the information regarding Saningrat, Medowo Village Secretary call for assistance to bring the Hygienic and Healthy Living Habit programme into reality funded by Allocated Village Funds.  Agus did not waste the opportunity.

This information certainly serves as the reminder that BIRU Team/East Java Rumah Energy does not possess sufficient understanding on Village Law No. 6 of 2014 on Village Funds, let alone the mechanism and utilisation procedures of Village Funds Allocation.  How can we discuss the Law as well as brief illustration of Village Funds without sufficient basic references?  Therefore, the BIRU Team/East Java Rumah Energi started to look more information.

In a simple term, the Village Law No. 6 of 2014 may be described as having a purpose of acknowledging and clarifying the village status and position within the Republic of Indonesia’s Constitutional System.  The State grants the village the authority to preserve its customs and traditions as well as culture of the village inhabitants.  This authority at the same time provides the flexibility for the village to plan its own activities and manage the source of funds for village development, as stipulated on Articles 71-75 of Law No. 6 of 2014 on Village Finance. (Source:  http://www.bpn.go.id/Publikasi/Peraturan-Perundangan/Undang-Undang/undang-undang-nomor-6-tahun-2014-4723).

Medowo Village Secretary apparently knew this and identified the opportunity for realising the Hygienic and Healthy Living Habit programme by utilising the village funds.  This choice provides the opportunity for the embodiment of several achievements, which includes among others the implementation of the Hygienic and Healthy Living Habit programme, utilisation of village funds for productive activities, and improvement of biogas installation constructed in the village.

Agus added that he has requested the funds to be specifically allocated for constructing biogas reactors for the small cattle farmers.  The considerations were based on the rationale that large cattle farmers could afford to construct their own biogas installations without the support of the village.  While the additional village funds means that the price paid by the cattle farmers will be reduced hence becoming more affordable for small cattle farmers.

Since 2009 up to now, BIRU Programme/ East Java Rumah Energi along with its construction partners have succesffully constructed approximately 7,300 biogas reactors.  Potential users today are cattle farmers with limited financial capacity.  Therefore, what is required is additional source of funds for biogas subsidy thus enable to reduce the disparity between biogas sale price and cattle farmers’ purchasing power.  One of the method which may be taken is by accessing the source of village funds.

As the resident of Medowo Village, Kandangan Subdistrict, Kediri District, Agus worked as animal health staff for three districts and often times serve cattle farmers in Kediri, Malang, and Jombang areas.  As an animal health staff at Kertajaya Kandangan Village Unit Cooperative, Agus routinely travels to the homes of cattle farmers within the cooperative operational areas.  He knows exactly the workload of small cattle farmers which are not yet energy independent by having their own biogas installations.  Their times and energy have been expended for cattle farming activities while at the same time collecting firewood for cooking purposes.  “There were almost no time for rest let alone for recreation,” Agus explained.

Ever since he joined BIRU Programme as a biogas supervisor, Agus has successfully constructed approximately 400 biogas reactors in three districts.  A fairly significant number in terms of the socio economic conditions of majority of the cattle farmers in his operational areas.  Is Agus Purnomo content?  No.  He is thinking about small cattle farmers with limited financial resources.  Agus tried to rack the brain to enable small cattler farmers to access biogas development programme.

“What they need is additional subsidy thus the price they pay will be within the range of the small cattle farmers’ affordability.  If only the village can allocate such funds, supported by BIRU Programme, or even better if Nestle would provide a loan facility and additional subsidy, the outcome will be highly sensational,” Agus said jokingly.

Based on his recommendation, the village has now set aside Village Fund Allocation as much as Rp 36 millions for the construction of 18-24 biogas units for small cattle farmers in Medowo Village.  His delight and big smile adorned his face when Agus said,”I know it is not that many, however there will be 18-24 small cattle farmers who will enjoy energy indepence.”

The Benefits of Biogas Shall Be Enjoyed By Everyone

In another place and another time, Juwardi, a supervisor for biogas construction partner, Tani Wilis Village Unit Cooperative in Sendang, Tulungagung initiated a discussion with Suwarton on the opportunity to access Village Funds to enhance the support of biogas development in the cooperative operational area.  Suwarto, the person in charge for biogas construction partner and at the same time the village head in one of the village at Sendang Subdistrict has a strong intention to look for opportunities to expand the access to biogas programme for cattle farmers.

“Pak Lurah,” as Suwarto is frequently referred by the people, continued his explanation that the acquisition of biogas has been included in 20% funds allocated for Village Community Empowerment.

“This technical reference book clearly specifies that the Priority of Village Development Implementation Sector specifically Construction and Development of Renewable Energy Means and Infrastructure as well as Environmental Conservation Activities in the typical Highland/ Mountainous, Agricultural, and Underdeveloped Villages, are the development and independent energy management which include among others the biogas acquisition,” the Head of the Village explained enthusiastically.

Equipped with this understanding, the Head of the Village is determined to initiate the plan to open up greater access for cattle farmers outside Sendang Subdistrict areas.  And the team at Tani Wilis Village Unit Cooperative biogas construction partner in Sendang, started to actively perform socialisation on the opportunities to utilise the Village Funds for biogas reactor construction through BIRU Programme/ Rumah Energi.

What is the reason of targeting biogas outside the Sendang Subdistrict areas?

“There are plenty cattle farmers in Sendang area who have installed biogas reactors besides Tani Wilis Village Unit Cooperative plans to expand new cattle farming areas.  Biogas is one of our means to attract the interests of people to engage in cattle farming,” the Head of the Village replied in a straightforward manner.

“There are plenty cattle farmers in Sendang area who have installed biogas reactors besides Tani Wilis Village Unit Cooperative plans to expand new cattle farming areas.  Biogas is one of our means to attract the interests of people to engage in cattle farming,” the Head of the Village replied in a straightforward manner.

A strategic plan in expanding the cooperative operational area and at the same time expanding the biogas market among the cattle farmers.

In addition to engaging in socialisation activities in various villages, the Head of the Village also plans to embrace the policy makers to direct the Head of Villages to allocate Village Funds for biogas acquisition.

“We have to be able to influence the policy makers at the district level.  Therefore, the socialisation process on biogas development model by utilising the Village Funds will be easier and quicker.”

“It should already be called performing advocacy on budgeting policies, Mr. Head of Village,” Wasis Sasmito chimed in on the Head of Village’s explanation.

“Yes, perhaps.  One thing obvious is that BIRU/East Java Rumah Energi colleagues shall accompany us in case we are required to be present in a hearing session or presentation before the Government Unit.”

“We are basically in constant readiness to provide the support,” Wasis said in an equally enthusiastic voice.

It is still a long way, however, the existing potential to access the Village Funds for biogas development has increased the expectation of small cattle farmers to construct biogas reactors.  Now it depends on us as the implementing team of BIRU Programme/Rumah Energi whether we are able to identify such opportunities, and consider it as an entry point to redefine the development strategies.

The utilisation of government source of funds, including the Village Funds and Village Fund Allocation is quite a hassle, demanding a strong stamina, and requires separate strategy.  Appropriate understanding on the system and local government budgeting procedures are necessary.  The only way for us is to start learning on that knowledge, as part of advocacy phases which we have to go through in implementing BIRU Programme/ Rumah Energi. (CHP-WS)