From Trash to Treasures: How Tempe Residue is Fuelling Indonesia 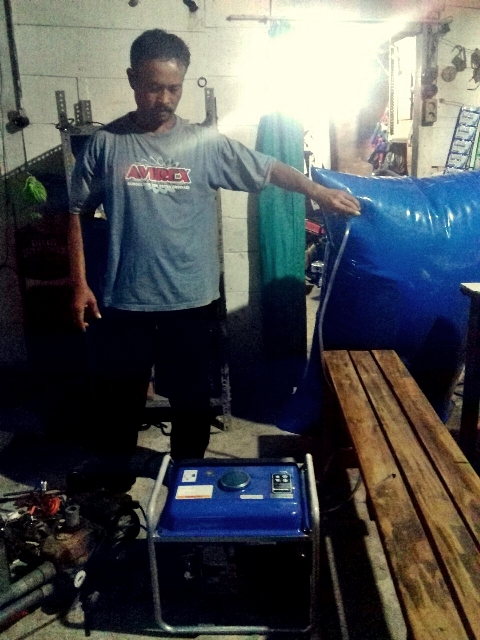 The warung is like any other Indonesian warung, strings of coffee and condensed milk sachets hang lazily over deep fried snacks on the counter. But in Karasgede Village, in the province of Central Java, the tea is heated, the rice is cooked and the room is illuminated by a new form of renewable energy, known as biogas.

The warung, along with nine other homes in the neighbourhood, is connected by pipes to a single 12 m³ anaerobic digester buried in a nearby chili pepper patch. This fully puts an end to LPG and firewood usage in each home, and has been in operation since September 2014.

Not only are the digesters capable of reducing CO² emissions by up to 4 tonnes per year, but the fuel also comes at a much lower cost. After the installation is paid off, all that is required is a source of organic matter, which in Karasgede Village is supplied by wastewater from a local tempe home industry.

The spread of anaerobic digesters is spearheaded by the BIRU (Biogas Rumah) program, who have received technical and organisational support from the Dutch development organisations HIVOS and SNV. Pak Royani, the director of one of BIRU’s partners in the Central Java region, explains how the Karasgede story began.

“Pak Rikno runs a successful tempe business here,” says Pak Royani. “But an increase in production meant more and more wastewater was being thrown out into rivers and fields. The acrid smell invaded the village until residents protested to the council and demanded the business be shut down. That was where BIRU stepped in with the solution of turning the waste into biogas, and it was well received by both neighbours, Pak Rikno and the local council. A local action group Sari Bumi was set up to organise its installation and maintenance.”

Inside the tempe production barn Pak Rikno breathes in with a smile, remarking that now, “the smell is gone.” He goes on to explain that, “I too was given access to gas from the tempe wastewater, but my business is already successful, other people need it more than me. So we decided to share it out for free to neighbours struggling to provide their kitchens with a source of fuel.”

The change in the village, thanks to BIRU, is an exciting example that could be replicated throughout rural Indonesia. As a result, Karasgede Village has been entered into a competition for energy independence in the Central Java province.

Standing beside his humble workshop where electricity generators, lamps and stoves are being manufactured for use with biogas, Pak Royani is enthusiastic about the potential for anaerobic digesters in Indonesia.

“Biogas is the best solution for the prosperity of Indonesia,” he says. “We are largely an agrarian people, and waste is one of the greatest problems afflicting our country, pollution destroys our environment, it makes us sick, our babies die young, and we cannot afford the high prices at the hospital. Biogas is the only solution that both cleans up the environment whilst providing villages with a cheap and independent source of modern energy.”

This is what drives the BIRU program, which with financial aid from foreign governments has succeeded in building over 16,000 anaerobic digesters throughout nine provinces in Indonesia. The BIRU project is currently promoting and teaching about bio-slurry, a by-product of the anaerobic digestion process, which has many diverse uses, such as an organic fertiliser, fish-food and a rich compost.

Pak Royani, driving out to monitor another anaerobic digester, spreads an arm out towards the green hills of Java, “this island was once known as the most fertile on earth, how beautiful would it be if our farmers turned away from chemicals and rampant pollution, and realised they could turn their very trash to treasures?.” (Joshua Parfitt)