Building the Village with Eco-friendly Energy 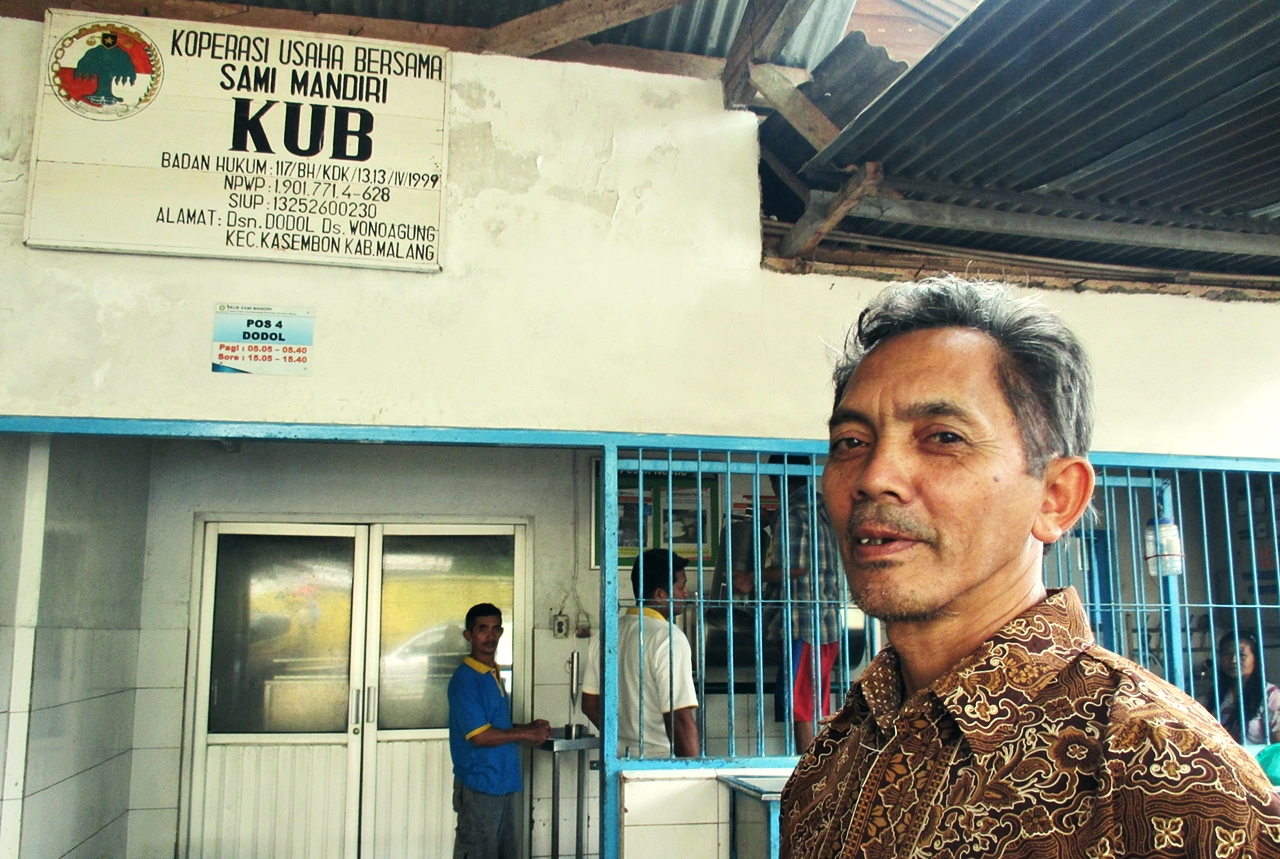 “I have achieved 80% of my dreams,” Suwaji said said with sparkling eyes. The man who loves to wear a short as his daily attire has been the Manager of Koperasi Usaha Bersama (KUB) Sami Mandiri since its establishment up to now. Suwaji is the pioneer, the founder, and at the same time the manager of this cooperative. Total member of this cooperative now is 600 people scattered throughout Kasembon Sub District in which 350 of them are dairy farmers with the capacity to produce 7.5 tons of milk on a daily basis. The supply of fodder are secured for 2 months with an equivalent value of Rp 1.2 billions.

Daily milk production of 7.5 tons are the results of Suwaji’s endeavors for half of his life span. Suwaji, or fondly known as Mali, reminisces his life during the last 60 years.

He was born and raised at Dodol Hamlet, Wonoagung Village which is situated at the forest areas of Kasembon Subdistrict region, western Malang. Little Mali grew and witnessed economic hardships sustained by the people at his hamlet. Minimum road access and the condition became worse during rainy season for houses with bamboo woven walls and thatch roof. Eating rice mixed with tubers are common sights, for rice planting season may only take place once a year. Moreover, harvesting can only be done after six month period. People rely on firewood sources from the surrounding forests.

Dodol Hamlet is situated only 2 kilometers away from Malang-Kediri provincial road. It takes 20 minutes to arrive at Dodol Hamlet from the provincial road. Travelling through winding and uphill roads, our eyes will be pampered with thick green vegetation. A bit closer to the road are durian and stink beans fields. Perhutani-managed forests then follow and further inland are natural forests.

Mali spent quite sometime in agricultural activities and harvest transportation services to meet the end needs of his family. He follows the similar patterns of traditional Javanese farmers, where in addition to farming activities, Mali also raised some beef cattles. However, back in 1986, Mali was attracted to raise a dairy cow. Although he had only one cow, but it was enough to spark Mali’s thought on the advantages of raising dairy cows instead of beef cattles. Dairy cows enable him to receive daily income in comparison to beef cattle when he can only enjoy his efforts after one or two years.

“Maybe this is the way to improve the community’s economy,” Mali thought.

Just imagine the challenges they have to overcome along the way. For a road condition which is relatively good today, it takes 30 minutes by car to arrive at the destination. Mali felt that it was his call to support milk delivery to KUD Kertajaya which is situated at the neighboring subdistrict. It is precisely situated at Kandangan Subdistrict, Kediri District.

“Whatever issues presented before your eyes, that is the one you have to overcome,” he said lightheartedly.

Although he was clueless about the dairy milk business, Mali encouraged himself to support the farmers. He started to routinely deliver the milk in the morning, afternoon, and evening with his pickup truck which he normally used to transport his harvest to the marketplace. Mali did not charge any fee from the dairy farmers, but in fact he received a reimbursement for his fuel expenses from KUD Kertajaya. His motive to support the neighbors, was his primary motive. To enhance the knowledge, Mali dilligently learned about dairy business. He even participated on a training for dairy business for two months.

“So that we have win-to-win solutions,” Mali added.

Why is the loss?

“I do not want to let people down,” Mali said lightheartedly.

Even to ensure the milk quality, he would not hesitate to spend his money to buy a milk density testing equipment.

When he felt that he needed additional workforce in milk delivery transportation activities, Mali was forced to find the workaround to pay for his two workers. It would be impossible for Mali to ask for additional money from the dairy farmers as their incomes were already minimum. The solution that he took was he set aside the profit from his farming business to pay for those two workers.

Out of the 14 dairy farmers with production capacity of 700 kilograms of milk on a daily basis, dairy businesses at Dodol Hamlet started to grow. There were additional 26 dairy farmers during the three years time span. Thus, there was a need to have their own independent organization. KUB Sami Mandiri was finally established in 1999. However, it was still necessary to distribute the milk through other cooperative before the milk production is delivered to PT. Nestle Indonesia.

“We were not able to carry the name of KUB Sami Mandiri until 2006, when our milk production level finally reached 4 tons on a daily basis.”

In general, this is an extraordinary success for a small-size cooperative in the vicinity of the forest, isn’t it? Perhaps.

Mali has a simple principle in continuing his efforts for the interests of the surrounding community.

“Convenient. Pleasing to the eyes. Enjoyable.”

A simple slogan from an individual with relentless spirit. Those three elements are his expectation which will lead to a better life of the community, in terms of physical, economical, as well as environmental achievements.”

The father of a child (who passed away several years ago), persistently encourages the community to improve the quality of their life. One of them is his request to the community not to discharge anymore waste to the river, fishing in the river using poisons, and hunting birds.

“So that it will be pleasing to our eyes and make us comfortable. We can hear the birdsong as well as see fishes swimming in the river. Jarno kali kethok mili bening (let the river runs with its crystal clear water),” Mali said in a light conversation at his house.

Biogas is one of the answer to his desire. Mali expects that through biogas, the number of manures discharged to the river will be reduced. Although, biogas technology is not something that is completely new to Mali. He remembered, as a boy, someone told a story about the Dutch who sparked a fire through a cow manure. Mali was curious.

Then, when he received an information about BIRU Programme, in mid-2010, Mali spontaneously expressed his desire to be one of the partner, and place biogas programme as the primary choice for dairy farmers who are the members of KUB Sami Mandiri. For Mali, biogas is the solution to save numerous things for the dairy farmers. Save their energy, save their times, and save their money. Prior to installing biogas reactor, people had to set aside 2-3 hours of their time to collect firewoods. During the rainy seasons when the woods were wet, they had to dry the woods first before they could use it for cooking. He also calculated the expenses of using LPGs. The expenses incurred for purchasing LPGs during the three years period are equivalent to the costs of constructing a 6-m3 biogas reactor.

Similar to the development of dairy farming business, Mali would not hesitate to spend money out of his own pocket to implement the biogas programme for members of his cooperative. His principle is, “There won’t be any solution without any sacrifice.”

To help constructing biogas reactor for members of KUB Sami Mandiri, Mali often time had to cover for the costs first. Now approximately 210 of his members have installed the reactor and enjoy the benefits of biogas. He has been able to bring his dream to improve the environmental and economic conditions of the community in his hamlet to come true. One step at a time.

Today, dairy farmers can enjoy the milk price of between Rp 4,800 to Rp 5,200 for each liter. Bricked houses and motorcycles are common sights in his hamlet. Two things that he did not see when he first pioneered the dairy milk businesses 30 years ago.

“I am happy, however, there are still 20% of my dreams that I have to achieve,” Mali expressed his determination at the end of the conversation on one evening. (CHP-WS).