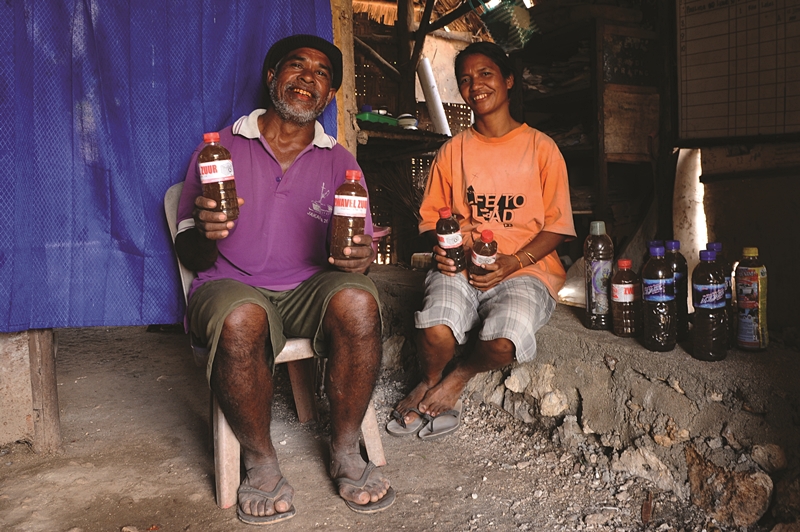 After receving an information about the Domestric Biogas Programme (BIRU), Bernadus Misa was attracted to participate in such programme. He and his family lives in Laikakang, Kambuhapang Village, Lewa Subdistrict, East Sumba District, East Nusa Tenggara. Initially, Bernadus Misa was not convinced enough to join BIRU Programme considering that he has only one pig and lives in an area with limited water supply. However, his resoluteness has successfully convinced Yayasan Rumah Energi to assist him in constructing one unit of domestic biogas reactor with a 4-cubic meter capacity. At the end of November 2013, the construction of his domestic biogas reactor has completed.

However, he could not immediately utilise the instrument as his supply of manure is far less than the requirement of reactor capacity. He then tried to work around the limitation, that is by mixing manures and human stools.

Additionally, he had to train his four children not to flush any other materials into the septic tank. The purpose is not to disrupt the growth of the microbe beneficial in the chemical process inside the reactor.

Bio-slurry is not the only product that he tries to develop. He also cultivates lemna (duckweed) after being introduced with the plants and provided with the seedlings by Organic Farming Officer (OFO). Due to the limited infrastructure, he cultivates the lemna using a tarp as the media. By applying the method, it has enabled him to cultivate the lemna and utilise the plants as feed for his chickens and pigs. The mixture of lemna and bran, especially is fed to his pigs, which enable the animals to achieve a healthy growth.

Bernadus Misa and his family has enjoyed the whole range of benefits and profits that he earned through Domestic Biogas Programme (BIRU).