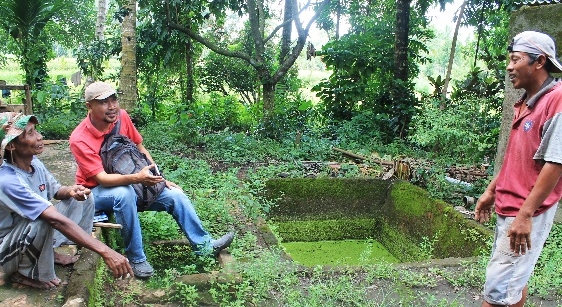 Amaq Rehan (68) resides in Bonjeruk Village, Jonggat Subdistrict, Central Lombok District, south of the City of Mataram. His daily activities include farming activities and fish culture. His fish pond is situated in the middle of rice paddy fields.

A footpath leading to a fish pond belongs to hime feels so shady. There are many trees with thick leaves along the way. There were lush green rice paddy fields behind the trees. There were also houses of the local inhabitants along the footpath. Some of them are with cattle pens which share the locations with house yards. Sharp odor emitted by mounting cow manures have forced us to walk even faster so that we can arrive faster at our destination.

The purpose of our visit is to monitor lemna culture or often time referred to as duckweed grown by Amaq Rehan. When we arrived at our destination, we watched with disaapointments. Our hopes to see the lemna growth in the fish pond all of sudden vanished. There were no green cover of lemna plants.

We finally decided to return. However, when we were about to leave the place, someone in the distant called us. We saw a middle-aged man walking from the rice paddy field to approach us with his genuine smile and friendly gestures. He greeted us and said,”I have moved the lemna to other ponds. If I insist on growing the plants in this pond, they will all be completely consumed by the fish. Although we have installed the nets, those fish can still penetrate the barrier. They can completely consume the plants overnight.” It seems like he already knew why we visit the place.

“I have another smaller pond to grow lemna at home. Everytime I leave the home for the ponds, I always prepare fish feed made of lemna and bran mixtures,” Aman Rehan continued with his story.

During the last one month, Amaq Rehan has used lemna as fish feed. Initially he was informed about the benefit of the plants by his son-in-law, who participated on a village meeting about the socialisation of lemna.

“Initially, I was just experimenting. It turned out that the fish love them very much, and the fish grew healthily. There were no difference with the feed that we buy from the store,” he said by showing his happy facial expression.

According to Amaq Rehan, the expenditure he spent to raise the fish including the purchase of fish seedling and fish feed is about Rp 1,000,000 unti the harvesting time.

“After using the lemna, I managed to cut the costs, for I do not need to buy fish feed from the store anymore,” he confessed.

Amaq Rehan uses the mixture of bran and lemna for his fish feed. The ratio of the mixture is one to one-half, in which one represents the ratio of bran composition while one-half is the composition of the lemna. He feeds the fish three times a day.

“God willing, I will generate even higher profit. I only need to provide the workforce and the costs to purchase the bran,” Amaq Rehan concluded his story.