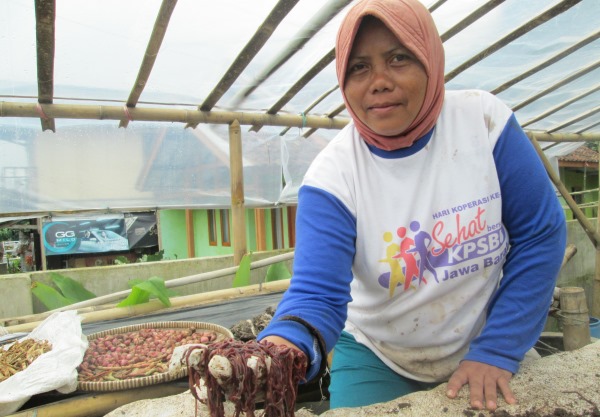 One afternoon we caught Anah (46) busy with sorting the earthworm that she was ready to harvest. Her hands were skillful and her face showed that she was passionate with her job. Anah is a resident of Sunten Jaya Village, Lembang Subdistrict, West Bandung District, who has involved in enhancing the benefits of bio-slurry as a media for vermiculture and the benefits of bio-slurry as the sources of nutrition for Lemna culture.

Her husband, Asep Rukmana (55), has involved in dairy farming business since 1993. Prior to owning a BIRU biogas installation, in addition to serving the duties as a wife, Anah frequently helps her husband’s activities in engaging in farming activities and dairy farming activities such as fertilizing the plants, collecting the grass, milking the cows, and collecting fire woods. She spent most of her time performing the above chores for approximately six hours every day.

Since installing her own biogas reactor back in 2012, she has managed to reduce the time in assisting her husband by two hours everyday since she does not need to collect anymore firewoods. She instead spends her time now to take care and pick up her grandchildren from schools. In addition to the affordability of more time spent with her family, other benefits that she enjoy during the early period of owning a biogas reactor was the diminishing household expenditures to purchase LPGs and expenditure related to the purchase of manures.

Following the decline of her health conditions due to the heart problems, Anah now does not spend much time assisting her husband’s activities in farming and dairy farming activities. To use her time and supporting her husband to earn additional income, during the last one year, Anah attempted to enhance the benefits of bio-slurry as the media for vermiculture. She chooses Lumbricus as the species of earthworm for her vermiculture. According to her, in addition to be excellent culture media, fresh bio-slurry (the one which is recently expelled through inlet pipe, Ed.) is also good as the source of food for the earthworm. Anah is able to earn between Rp 150,000 to Rp 200,000 on a weekly basis generated by her earthworm sale and kascing fertilizer (fertilizer produced by the vermiculture media, Ed.).

“I used to expect a money given by my husband. Now I have earned my own income that I directly received and managed by myself,” she confessed as she roared with laughter when asked who keeps and receive the money generated by the harvest of her vermiculture.

When asked whether she spends all the money generated for her needs, Anah convincingly replied. “No, Brother, I use some of the money for the daily needs of my grandchildren’ school needs and set some aside for my own saving.”

Furthermore, Anah’s dilligence in managing the vermiculture has inspired other housewives surrounding her residence to also earn additional income through vermiculture while also participating in environmental conservation. “Now people have utilised cow manures and no longer discharge them to the river,” Anah, who lives in the river bank of Cikapundung River, explained.

In addition to her activities in vermiculture, presently Anah has tried to enhance the benefits of bio-slurry as the source of nutritioin for Lemna plants (duckweed or known locally as kayambang, Ed.). Immediately after participating in the socialisation of GADING Project (a project with the purpose to enhance the knowledge and capacity of the farmers/cattle farmers in a sustainable and integrated farming through the utilisation of bio-slurry and Lemna as the plants with high nutrititional contents). Anah was interested to try Lemna culture.

There were two reasons which encouraged Anah and her husband to desire and try Lemna culture. Anah has raised some fish. According to the information she acquired during the socialisation of GADING Project, Lemna is excellent source for fish feed. With the availability of feed source, Anah also desires to enhance the freshwater aquaculture, and enhancing her motives for household consumption only to additional income stream.

Anah’s husband has tried several times to add Lemna on the cattle (± 500 grams) by mixing the concentrate and the results showed that there were no negative effects to the animals’ health as well as milk quality.

“Should I manage to success in Lemna culture and give a positive impact on the household economy, other neighbors will follow suit and start Lemna culture,” she concluded the conversation.