The Sweet Fruit of Papay Fertilized by Bio-slurry 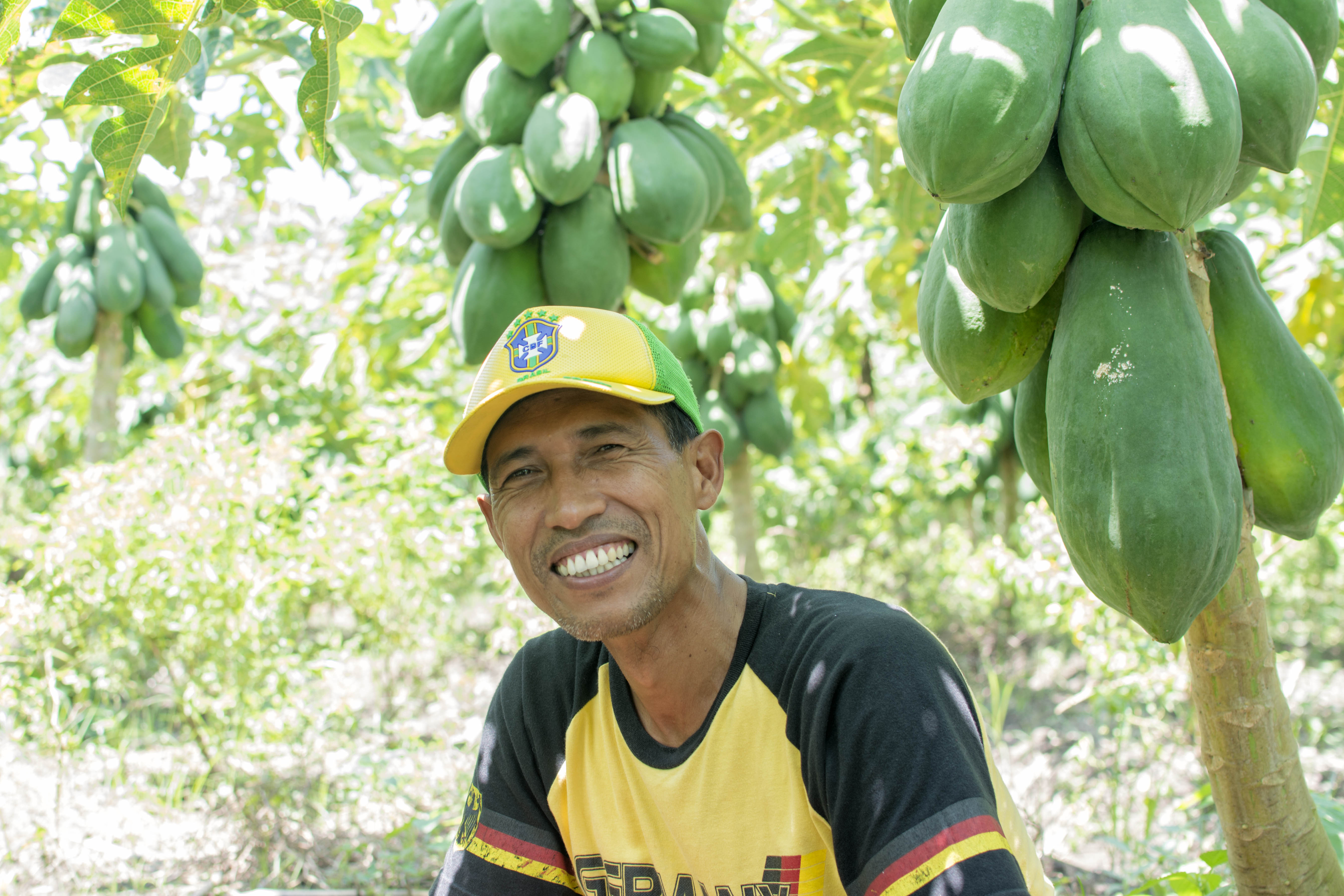 It was very much understandably when Giyat was shocked and worried. The experience taught him that cow manures may cause the plants to fail due to its ‘heat.’ Giyat was not aware that it was not fresh manures but instead it was bio-slurry which was a fermentation product produced by biogas reactor.

Ultimately Giyat found out, that instead of failing, the papaya plants have in fact grown and thrived. Only then he dare to speak up his mind about his doubt and anxiety to Rujuk. During the second fertilization, Giyat has even requested to double the dosage of liquid bio-slurry to 8,000 litres.

“Feed them to the fullest,” Giyat requested.

This story has been told by Rujuk when he had a conversation with Christina (MMO BIRU of East Java) while reminiscing on how people thought that he was desperate to fertilize his papaya plants with liquid bio-slurry. Rujuk was not a rookie in terms of biogas and papaya growing aspects.

Joining East Java BIRU programme as supervisor of CPO at Community Institute of Research and Development on June 2010 and changed his status as the Constructor Partner Organisation himself by establishing a business entity called CV. Bumi Mitra Abadi on January 2016.

Rujuk has constructed approximately 300 reactors in such regencies as Kediri, Blitar, Tulungagung, Tuban, and Bangkalan. He is actively promoting the utilisation of bio-slurry in his operational territory in Ngancar, Kediri. No less than four bio-slurry players emerged as a result of his relentless promotion. His brother, Priyo, developed and sold bio-slurry base pesticides. Riyanto then became the pioneer of bio-slurry fertilization services provider. Meanwhile Sarianto now has become a master enterpreneur of organic fertilizer.

Instead of sitting on his success, Rujuk is active in experimenting with bio-slurry utilisation. Catfish aquauculture using bio-slurry as the feed as well as horticulture with bio-slurry fertilizer were among his enterprise he has accomplished. His experience in utilising the bio-slurry in addition to his experience as papaya grower back in the 90s has convinced him to grow papaya fertilized by bio-slurry.

Stable market price, established marketing channel for his papaya, and the abundance of bio-slurry have been his source of motivation and inspiration. Rujuk chose to return as papay grower.

With a 4,200 m2 leased land as the starting point, Rujuk started to grow 930 papaya plants on April 2015. Since then on, he has fertilized his field with liquid bio-slurry. Rujuk conveyed that his use of chemical fertilizers during the growth of his papaya plants have been reduced down to around 30%. Now his routine fertilization include 1.5 kgs of NPK every month and application of bio-slurry repeated every 3-4 months.

“What is your secret, Juk?,” other papaya growers around asked him inquisitively.

The appearance of his papaya plants have allured and invited questions from other papaya growers. Obiviously, by adding the bio-slurry, the advantages are simply striking, among others faster growth, the flowers immediately mature into fruits, densely populated fruits, as well as harvest season which are 1-3 months earlier. Other papaya growers enthusiastically raise questions to Rujuk and his horticulture secret. Among those farmers, are Rejo, a papaya grower with a business in selling chemical fertilizer. As a result, Rejo and two other farmers (papaya growers adjacent to Rujuk’s field) have asked to obtain bio-slurry application on their papaya fields. Subsequently, more growers will follow suit.

Starting from the initial harvest season early on December 2015 until now, there have been 18 harvest seasons and total fruit sold 14 tons. With an average weight of a fruit at around 3 kgs and the sales price of Rp 2,000 per kg.

Rujuk has pocketed a total of Rp 25 millions during 3 month period. Indeed a tantalizing amount of money.

“The money I earned from selling the papaya has been used to pay for the down payment of that pick up truck,” he answered while pointing at a new white coloured pick up truck parked on the side of his house.

“Our calculation suggested that it is more profitable to pay for a new pick up truck rather than leasing a pick up truck for operational purposes. That is the reason why we dare ourselves to buy a new pick up,” Arik, Rujuk’s wife, added.

“What about the monthly installments?” Christina chased further.

“Hahaha … I will certainly pay them from the subsequent sales of my papaya fruits, Sister,” the man with a single child laughingly concluded the conversation.

The utilisation of bio-slurry has been part of the effort to reduce horticultural production costs which ultimately increase the profit margin for this biogas and bio-slurry user. (CHP)