Coping with Chicken Drop? Biogas is the Solution! 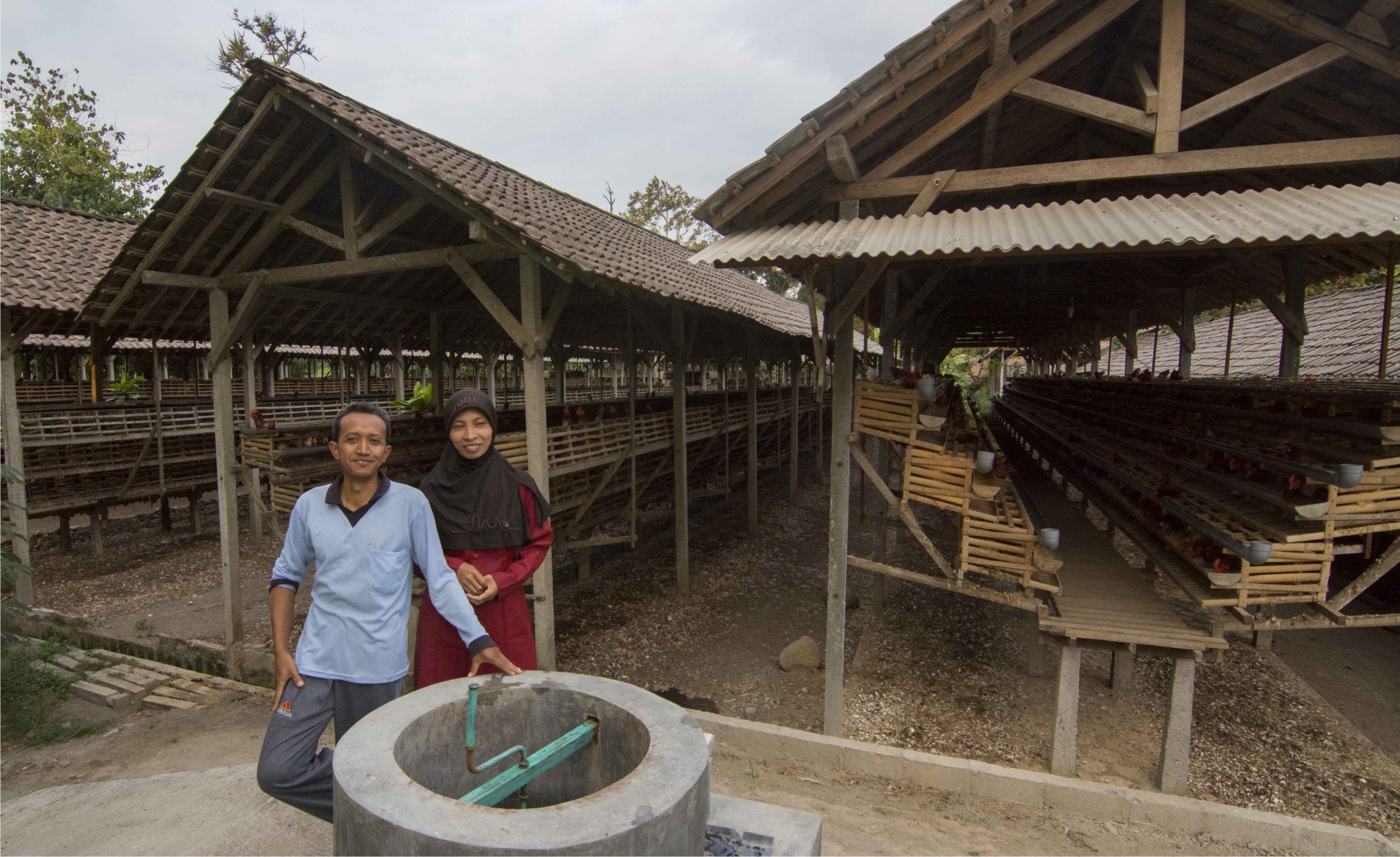 A house with Javanese architectural style of 1960s era in Kebon Agung Village Wonodadi, Blitar looks so peaceful, surrounded by shady trees in the house yard which occupies an area twice the size of volleyball court.  Some of the threes are perrenial plants with dense foliage, which brings the cool air to the surrounding areas.  Moreover when the gentle breeze blows.  There goes all the physical fatigues.

Hermanto (38) is the house owner.  He is as if not aware on how rare is the fresh air that we are enjoying, he is so passionate to show us his backyard.  There are several wooden structures covered with roof tiles with a battery (chicken coop/enclosure surrounded by bamboo bars) occupying the size twice as big as the farmers’ house.  Several coops are still empty.  In enclosures filled with chicken, there are some people appear to clean up the manures from the bottom of the enclosures and feed the birds with the feedstuff.  It is a routine activity in an enclosure belonging to a laying hens farmer.  There are around 4,500 hens there.  “My plan is to add the number of the birds up to 10,000 hens,” Hermanto said.

Hermanto has been a laying-hen farmer since 2007.  His business can be considered to work smoothly thus enable it to be the primary source of income for his family.  Despite the achievement, there is one thing that concern Hermanto: chicken drops.  There are approximately 225 kg chicken drops produced in one day which are source of pollution and source of health problem for the poultry themselves.  The ammonia content in chicken drops may lead to appetite loss which subsequently impact on the decrease of egg production.

“There were buyers of chicken drops, however it was only during dry season,” Hermanto said.  Hermanto has tried all methods to cope with these chicken drops waste, such as burry the chicken drops in landfill, sprinkle lime up to pouring the carbolic acid to the drops.  None of them yielded satisfactory results.  He even tried to produce simple biogas out of plastic drum.  All of them led to nowhere but failures.

Rujuk Supriyanto, a biogas supervisor from Ngancar area, Kediri, which provides information on biogas construction which then aroused Hermanto’s interest.  Since the fist meeting with Rujuk, Hermanto received information on BIRU programme in East Java.  One week later, Hermanto invited Rujuk in a group meeting to conduct socialization on biogas at the farmers’ group meeting.  It took only two weeks after the socialization for Hermanto and wife to decide the construction of biogas reactor at their home.

“The primary purpose was to manage the waste rather than to harvest the gas.  I was submissive, should this biogas effort fail, then it is my destiny,” Hermanto recalled.  He put a Rp 9 million rupiat at stake to construct a biogas with a 12-cubic meter capacity.

It took up to 28 days befor Hermanto’s biogas was finally able to produce a blue flame.  The gas production was even more that Hermanto ever imagined.  His initial intention to construct biogas was only to cope with the waste immediately changed when he found out that the gas production was abundant.  Hermanto racked his brain and finally discover an idea to modify the gas brooder for day old chicks in order to enable the equipment to be powered by biogas instead of the LPG that he normally used.  The rising period of these day old chicks required LPG-powered gas brooder for 30 days.  Hermanto uses a modified gas brooder powered by biogas and since then enabled him to save the cost of rearing day old chicks down to 50% or approximately Rp 200-250 thousands.

Abundant gas supplies from BIRU reactor has also inspired Sunsufi, Hermanto’s wife, to start on a house industry of producing a type of corn chips.

“I wish that mass production of sulfur filter would take place in the near future, to enable the use of biogas withouth having to worry about the sulfur content,” Hermanto expects.  He has become impatience and wish to put the biogas to use to operate the genset equipment he normally uses for lighting his chicken coop, water pump, as well poultry feed chopper and mixer.

Other than the biogas, Hermanto also put the bio-slurry to use as fertilizers for his flower plants around the biogas reactor, including his California papaya plants.

With his current population of poultry, there should have been 2 reactors with 12-cubic meter capacity to cope with all the waste produced by Hermanto’s chicken coops.  Presently he is trying to accumulate some capaital to construct the second biogas installation in his house.

“Owning biogas installation is like having your own gas and fertiizer factories,” Hermanto said cheerfully.  (CHP/MLG)